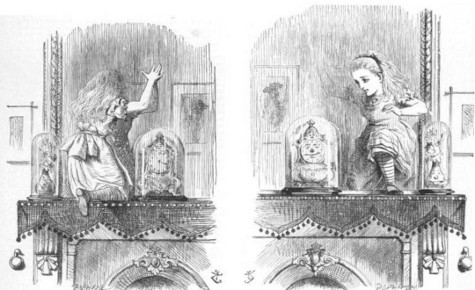 The earliest match located by QI containing the keyword “behinder” appeared in “The Detroit Free Press” of Michigan in January 1943. The saying was spoken by a truck driver with the common first name of “Bill”:[1] 1943 January 30, The Detroit Free Press, Behind the Front Page by FP Staff, Quote Page 15, Column 1, Detroit, Michigan. (Newspapers_com)

The shoemaker in Gatlinburg is a resourceful soul. With some fine cowhide he has been making belts and he has also invented a new kind of sandal which requires no ration points. His comment is “The harder I work, the behinder I get.”

In 1958 “The Indianapolis Star” of Indiana printed an instance using “hurrier” and “behinder”. The collector of this slogan was identified but not the creator:[3] 1958 November 23, The Indianapolis Star, The Things I Hear! by Lowell Nussbaum, Section 2, Quote Page 5, Column 2, Indianapolis, Indiana. (Newspapers_com)

GENE MEIHSNER, production man for Caldwell, Larkin, et al., collects slogans. His latest: “The hurrier I go, the behinder I get.”

Collecting the quaint expressions of the Pennsylvania Dutch is a favorite diversion of many Philadelphians. A few that pop up on most lists are: 1. The sign on a door where the bell was out of order: “Button don’t bell. Bump.” 2. The sound tip: “Better it is to single live than to the wife the britches give.” 3. The housewife’s complaint: “The hurrier I go, the behinder I get.”

“Of course,” replied the Queen.” “You have to run as fast as you can to stay in one place. To get anywhere, you have to run twice as fast.”

The two lines above evoked a scene from Lewis Carroll’s 1872 book “Through the Looking Glass”; however, Alice did not use the saying in Carroll’s book as shown in the excerpt below:[7] 1872, Through the Looking Glass: And What Alice Found There by Lewis Carroll, Chapter 2: The Garden of Live Flowers, Quote Page 42, Macmillan and Company. (Google Books Full View) link

“Well, in our country,” said Alice, still panting a little, “you’d generally get to somewhere else—if you ran very fast for a long time, as we’ve been doing.”

“A slow sort of country!” said the Queen. “Now, here, you see, it takes all the running you can do, to keep in the same place. If you want to get somewhere else, you must run at least twice as fast as that!”

In 1973 a columnist in a Fort Lauderdale, Florida newspaper connected the saying to Lewis Carroll, but the journalist did not directly ascribe the words to Carroll:[8]1973 April 1, Fort Lauderdale News, Inflation Causes A Stomach ‘Ache’ by Brian Howland (Staff writer), (Continuation title) Inflation May Be Hazardous To Your Stomach, Start Page 1E, … Continue reading

The lament of Lewis Carroll’s 1800s was having to run as hard as you can to stay in the same place.

The lament today is not-so-comically told by the Sad Sack sign seen on an occasional desk: The Faster I Go, The Behinder I Get.

The hurrieder I go the behinder I get.
Anonymous Pennsylvania Dutch saying.

. . . the March Hare, whispered in this reporter’s ear, “The hurrieder I go, the behinder I get.”

Like the White Rabbit in Lewis Carroll’s “Alice in Wonderland,” the faster New York goes, the behinder it gets.

An efficiency expert is a man, according to a smart country boy, who can explain why “the furtherer you go, the behinder you get!”

We had a cameraman who could tell you what speed wasn’t. He did everything at a snail’s pace. His favorite statement was, “The faster I go, the behinder I get!”

“The faster I go, the behinder I get,” said the Rabbit in “Through the Looking Glass.”

The White Rabbit never says, “The hurrier I go, the behinder I get,” nor does the Mad Hatter say, “I am under no obligation to make sense to you.”

In conclusion, this family of sayings began to circulate by 1943 when an instance with “behinder” was attributed to a truck driver named Bill. Thus, the origin was largely anonymous. A version with “hurrier” and “behinder” was in use by 1958. Lewis Carroll (Charles L. Dodgson) died in 1898. He was implausibly linked to the expression by 1971.

Image Notes: Public domain illustration by John Tenniel depicting Alice stepping through the looking-glass from the 1872 edition of “Through the Looking Glass: And What Alice Found There” by Lewis Carroll.

(The article in “The Guardian” was mentioned on the mailing list of the American Dialect Society which inspired QI to tackle this topic. Thanks to discussants Bill Mullins, Geoffrey Nathan, Andy Bach, David Daniel, and Laurence Horn. In addition, thanks to quotation expert Nigel Rees who referred to the article in “The Guardian” and explored this topic in his April 2021 “Quote… Unquote” newsletter.)