Quote Investigator: The earliest version of this humorous and imperious statement that QI has located uses the word “book” instead of “novel” and is indeed attributed to Benjamin Disraeli in 1868. Boldface added to excerpts by QI:[2] 1868 May, Fraser’s Magazine, The Caucasian Administration in Trouble, Page 670, Longmans, Green, and Co., London. (Google Books full view) link

Another entertaining and more modest viewpoint concerning reading and writing books is expressed by the prominent American author Washington Irving in 1824. At the beginning of “Tales of a Traveller” Irving writes a section “To the Reader” using his Geoffrey Crayon persona:[3] 1824, Tales of a Traveller by Geoffrey Crayon (Pen name for Washington Irving), Volume 1 of 2, To The Reader, Page vii, L. Baudry, Paris. (Google Books full view) link

A review of Washington Irving’s work in the London Literary Gazette in 1824 highlights the comment about reading and writing books [LLG]:

The Introduction is playful and amusing. Confined by sickness at Mentz, unsusceptible of any enjoyment, and even incapable of reading, Geoffrey Crayon at length exclaims in despair–

“Well, if I cannot read a book, I will write one.”

As noted above an attribution of the target quotation to Benjamin Disraeli appears in Fraser’s Magazine in May of 1868 and below is an extended excerpt[4] 1868 May, Fraser’s Magazine, The Caucasian Administration in Trouble, Page 670, Longmans, Green, and Co., London. (Google Books full view) link. The Latin phrase “Consule Planco” means “when Plancus was consul (i.e., in my younger days; in the good old days) (Horace)”.[5] BookRags website, The Routledge Dictionary of Latin Quotations, consule Planco. (Accessed 2010 September 9) link

On being asked by an acquaintance many years back—Consule Planco—whether he had read a particular book, he replied, ‘When I want to read a book, I write one.’ This pleasantry, as it was thought at the time, now sounds like truth. His limited knowledge, especially of standard works, contrasts curiously with his versatility and fertility…

This is the kind of talking and writing in which Mr. Disraeli delights and excels. He once replied to an acquaintance who asked him whether he had read a book: “My dear fellow, when I want to read a book, I write one.” He is philosophically indifferent about the validity of a thought or theory so long as it will bear pointing and polishing.

The version of the quote with the term “novel” substituted for “book” is also popular:

Fashionable Scribbler (who is, however, quite unknown to fame). “A–PENDENNIS? AH! LET ME SEE!
THAT’S THACKERAY’S, ISN’T IT? NO, I’VE NOT. THE FACT IS, I NEVER READ BOOKS–I WRITE THEM!” 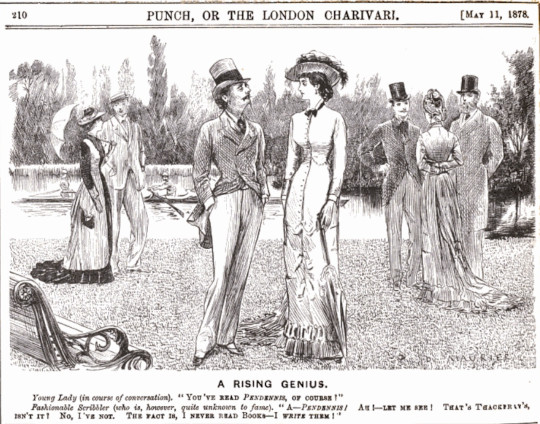 In conclusion, the saying you asked about is attributed to Benjamin Disraeli as early as 1868 though the intent is not necessarily friendly. QI thanks you for your question and compliments you on your fine associative memory for retrieving the phrase while reading “The Black Swan”.

(Great thanks to Jay whose inquiry led QI to formulate this question and perform this exploration. Thanks also to researcher Nigel Rees who mentioned the 1878 citation in his newsletter.)