Dear Quote Investigator: Graphic artist Donald McGill created one of the most popular postcards of the previous century. The card depicted a man and woman sitting beneath a tree with a book, and the caption said:

“Do you like Kipling?”
“I don’t know, you naughty boy, I’ve never kippled!”

The humor was based on wordplay using the surname of the prominent literary figure Rudyard Kipling. The Guinness Book of World Records stated that about 6,000,000 copies of the card were sold. McGill created many other postcards during his long career, but during the 1950s some of his works were banned because the double-entendres and innuendos were too saucy for the censorship-minded authorities in his locality of the United Kingdom.

Could you determine if McGill originated the wonderfully funny dialog on this seaside postcard?

Quote Investigator: The earliest evidence QI has located for a matching joke was printed in 1907. This version was considerably longer than the two dialog lines given above, but the core of the quip remained the same [SNPP]:

At a dinner given in a home that was marked for the literary acquirements of its members the conversation naturally turned to books and their authors. This was not much to the liking of one young woman, who was more noted for her skill at golf and kindred sports than for her knowledge of romance and history. From time to time she attempted to start a discussion of outdoor games, but to no avail. At last her companion at the table turned to her with the inquiry:

The fair young thing knitted her brows in thought for a moment, then answered blithely:

“Kipling? I don’t believe it has been introduced in our set yet. How do you kipple, anyway?”

By 1917 a concise version of the gag was published that was even closer to the modern version. The initials “s. y. t.” in the following excerpt correspond to “sweet young thing” [NDQC]:

“Are you fond of Kipling?” queried a literary friend of ours of a sweet young thing he met at a party last week.
“I really don’t know,” blushed the s. y. t., “I never kippled.”—Book Notes.

Top quotation expert Nigel Rees writing in “Brewer’s Famous Quotations” noted that the postcard by Donald McGill was “undated, but possibly from the 1930s” [NRBF].

Wordplay using Kipling as a verb form can be traced back further in time to a poem by James Kenneth Stephen in the collection “Lapsus Calami” published in 1891 which was also excerpted in Cosmopolitan magazine. In the full poem titled “To R.K.” the author complained of “prose which knows no reason” and “unmelodious verse”. He humorously attacked the popular adventure writer H. Rider Haggard and Rudyard Kipling by dreaming of a world in which they both stopped writing [JKSL] [JKSC]:

When mankind shall be delivered
From the clash of magazines,
And the inkstand shall be shivered
Into countless smithereens;
When there stands a muzzled stripling
Mute, beside a muzzled bore,
When the Rudyards cease from Kipling
And the Haggards ride no more.

In 1892 the influential humor magazine Puck published a cartoon with a caption containing wordplay based on Kipling. A man responding to a party host assumed that “Kipling” must have referred to a card game (see illustration) [PKMG]:

Hostess. — Are you fond of Kipling?
MR. GAIMES (of Chicago). — Never played it; but I’d just as soon take a hand as not — I s’pose I could pick it up easy enough! 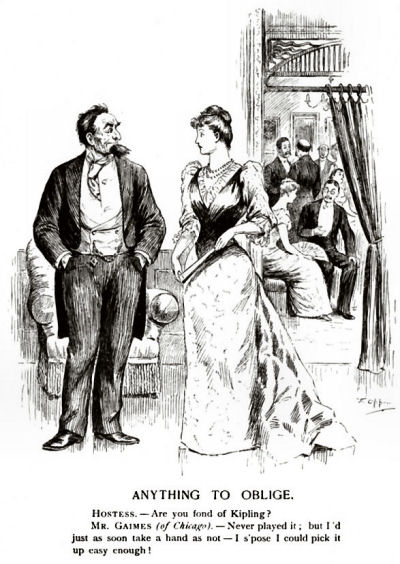 In 1907 the joke was printed in the book “Suppers: Novel Suggestions for Social Occasions” as mentioned previously in this article. Here is a shortened excerpt [SNPP]:

“And do you not like Kipling?”
The fair young thing knitted her brows in thought for a moment, then answered blithely:
“Kipling? I don’t believe it has been introduced in our set yet. How do you kipple, anyway?”

In 1910 a newspaper in Brooklyn, New York used “kippled” as a comical verb form indicating that Kipling was writing again. His work was compared to a contemporary poet named Alfred Austin [RKAA]:

KIPLING HAS KIPPLED.
[From the Boston Evening Transcript.]
Kipling has again kippled, and not more flatly than Alfred Austin.

In 1917 “The National Druggist” published a version of the joke as noted above. The caption was similar to the caption on the seaside postcard sold in later decades [NDQC]:

“Are you fond of Kipling?” queried a literary friend of ours of a sweet young thing he met at a party last week.
“I really don’t know,” blushed the s. y. t., “I never kippled.”—Book Notes.

In 1922 the periodical “Aerial Age Weekly” printed a variant of the quip that emphasized the amorous interpretation [AAGB]:

Gladys—Did you know that Alyce is very fond of Kipling?
Burnie (who has been out with Alyce)—Oh, is that what she calls it?—Widow

In 1924 the magazine Life published a cartoon depicting a man and woman beneath a tree with the following caption [LFKI]:

In 1937 a Chicago newspaper printed the gag, and atypically both participants in the dialog were identified as male [HCCI]:

Harry: “Do you like Kipling?”
Charlie: “I don’t know; I’ve never kippled.”

The prominent science fiction author Philip K. Dick included a version of the joke in his 1969 novel “Galactic Pot-Healer”. The dialog existed in the thoughts of a character [GPPD]:

In 1971 a syndicated newspaper article from the Guinness Book of World Records organization remarked on the popularity of McGill’s postcard [BGDM]:

In conclusion, the earliest known example of Kipling used as a comical verb form appeared in a poem by James Kenneth Stephen in 1891. In 1892 the term Kipling was used to amusingly denote a card game. By 1907 a joke similar to the one on Donald McGill’s postcard was printed in a compendium by Paul Pierce though the crafter of the gag was not specified.