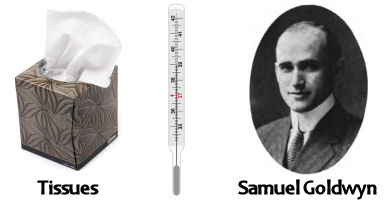 Dear Quote Investigator: It is flu season, and when a co-worker called in sick recently a friend said that he probably had the “intentional flu”. I had never heard this wordplay on “intestinal flu” before, but my knowledgeable friend stated that this quip originated with Samuel Goldwyn. Is this an authentic Goldwynism?

Quote Investigator: A version of this joke was attributed to Samuel Goldwyn in the short biography “The Great Goldwyn” by Alva Johnston published in 1937. A section of the volume presented “a few Goldwyn lines that are vouched for by good authorities”. This was one:[1] 1937, The Great Goldwyn by Alva Johnston, Quote Page 33, Random House, New York. (Verified on paper in 1978 Arno Press, New York Times edition which reproduces the 1937 edition)

I have been laid up with intentional flu.

Yet, this malapropism was already in circulation by 1932. A humor column by Ted Robinson published in the Cleveland Plain Dealer newspaper was filled with incorrect words and phrases. Here is an excerpt followed by a table with the correct terms:[2] 1932 February 1, Cleveland Plain Dealer, Philosopher of Folly’s Column by Ted Robinson, (Letter to Theo from Rimmer), Quote Page 12, Column 3, Cleveland, Ohio. (GenealogyBank)

He must be halving an awful time trying to keep hoase and look after the youngsters. And believe me it isn’t the easiest job in the world keeping an eye on the health of a bunch of off springs like that when winter seems to bring just one epidermis after another. 1st its mumps and then its missiles and then along comes intentional flu or maybe infidel paralysis, and all in all its no snap.

As noted previously the phrase was attributed to Goldwyn in a 1937 biography. When this book was discussed in “The Saturday Review” the reviewer repeated several Goldwynisms but expressed skepticism about some of the sayings:[3]1937 July 17, The Saturday Review, Hollywood Legend by Phil Stong, [Review of “The Great Goldwyn” by Alva Johnston], Page 6, Column 3, Saturday Review Associates, New York. (Verified on … Continue reading

No one in his right senses, and there is no question about Mr. Goldwyn’s sanity, thinks that … people are “laid up by intentional flu.”

Add to your junior malapropisms the explanation of the nine-year-old in Cleveland Heights, returning to school after an illness: “I was sick in bed with intentional flu.”

Jake (Malaprop) Mintz, who is recuperating from an illness, says he doesn’t know whether it was the “intentional” flu or “that new melody, various X’s!”

In conclusion, there is some evidence that this malapropism was spoken by Goldwyn; however, it is also possible that this was an existing joke that was simply reassigned to Goldwyn. QI believes that the latter option is the most likely.