Whether Barnum actually used either of these expressions is controversial. Would you please examine this topic?

Quote Investigator: QI has located no persuasive evidence that Phineas Taylor Barnum who died in 1891 spoke or wrote this saying. Researcher Ralph Keyes presented a skeptical stance with his assertion in “The Quote Verifier” that “No modern historian takes seriously the routine attribution of this slogan to P. T. Barnum.”[1] 2006, The Quote Verifier by Ralph Keyes, Quote Page 215, St Martin’s Griffin, New York. (Verified on paper)

There exists a family of closely related expressions with a long history. Here is a sampling together with years of occurrence. The first item listed employed dialectical spelling. The word “flat” was a synonym for “fool”. The abbreviation “attrib” means that the words were attributed to an individual, but the evidence was indirect:

The above listing is a snapshot of current research results, and it will certainly change over time as more data is gathered. The earliest instances of these expressions were anonymous, and QI believes that later attributions had inadequate support.

In 1806 an article titled “Essay on False Genius” was published in “The European Magazine and London Review”. Within the article an instance of the saying was attributed to a fictitious commodity seller. The passage reflected the prejudices and stereotypes of the milieu, and the phrase was written in dialect. Boldface has been added to excerpts:[2]1806 January, The European Magazine and London Review, (By the Philological Society of London), Volume 49 (XLIX), Essay on False Genius, Start Page 25, Quote Page 26, Column 1, Published by James … Continue reading

It was the observation of one of the tribe of Levi, to whom some person had expressed his astonishment at his being able to sell his damaged and worthless commodities, “That there vash von fool born every minute.” And perhaps the calculation might be brought to the proof, that not more than fifty men of genius are born in half a century.

In 1826 “The New-York Evening Post” reprinted an article about a letter that appeared in a London newspaper and appended the following remark. A version of the adage using “day” instead of “minute” was placed between quotation marks and designated a “principle” indicating that it was already in circulation. No attribution was given:[3] 1826 April 8, The New-York Evening Post (Evening Post), (Comment on article “From the Boston Statesman, April 5”), Quote Page 2, Column 3, New York. (GenealogyBank)

The writer of this letter wonders that the English will continue to trade with America, and can account for it only on the principle that “a new fool is born every day.”

It is only surprising, after the repeated exposures of this species of robbery, that fresh flats are so frequently picked up; but, as these ingenious speculators say, “there is a flat born every minute;” and it is not likely the race will become extinct.

In 1839 “Fraser’s Magazine for Town and Country” printed an instance of the saying that used the word “flat” in the domain was horse racing:[5]1839 June, Fraser’s Magazine for Town and Country, Volume 19, Number 114, Anatomy of the Chess Automaton, Start Page 717, Quote Page 717, Published by James Fraser, London. (Google Books Full … Continue reading

Man may be fairly styled an animal of the class “gullible.” From the hour of his birth till the day of his death, never does the organ of credulity cease to bump out his cerebrum. It is a common saying among the legs of the turf, that “there is a flat born every minute.” No dictum can be based on better grounds.

In 1855 “The Yale Literary Magazine” published a comical poem about a baby show that mentioned P. T. Barnum and included word play with the terms “succor” and “sucker”. Note that a breast-feeding baby may be designated a “sucker”. Also, according to the Oxford English Dictionary the sense of “sucker” as a greenhorn or simpleton was already established by 1838:[6] Oxford English Dictionary: OED Online, Entry: sucker, noun, I, 1b figurative; Oxford University Press. (Accessed oed.com on April 10, 2014)[7]1855 July, The Yale Literary Magazine, Conducted by the Students of Yale College, Volume 20, Number 8, Editor’s Table, Start Page 317, Quote Page 320, Published by Thomas H. Pease, New Haven, … Continue reading

They all were there in beauty so bright,
Arrayed in their very best bib and tucker:
Mr. Barnum provided for each one’s needs,
And gave needed succor to each little sucker.

Thus, the poem stated that Barnum was attending to the needs of newly born suckers. Nevertheless, the earliest known evidence for the saying “sucker born every minute” was dated 1879, and the ascription to Barnum only occurred more than a decade later as detailed further below.

In 1877 a London newspaper quoted a “sharper”, i.e., a criminal trickster, using a version of the expression with “hour” instead of “minute’:[8] 1877 August 18, The West-End News and London Advertiser, Betting Agencies and Fools, Quote Page 3, Column 1, London, Middlesex. (NewspaperArchive)

“There is a fool born every hour,” said one of these sharpers to an informant of Mr. Anderson, the member for Glasgow, “and, thank Heaven, the majority of them live!”

In January 1879 the earliest instance using “sucker” appeared in an article titled “Gambling in Chicago” printed in “The Inter-Ocean” newspaper of Chicago, Illinois. The following words were attributed to an “old-timer”, and the saying was enclosed in single-quotation marks signaling that the phrase was already in circulation:[9] 1879 January 2, The Inter-Ocean, Gambling in Chicago, Quote Page 5, Column 2, Chicago, Illinois. (Newspapers_com)

. . . in the season they make a bit on base ball, or on the races, and then, you know, ‘there’s a sucker born every minute,’ and rigid city legislation drives the hard-up gambler, who would be a decent one of the kind, to turn skin-dealer and sure-thing player.

It was an expert confidence man who said that “there was a sucker born every minute, and some have remained suckers all their lives.”

Gamblers call all outside their fraternity suckers. They say “There is a sucker born every minute, and New York is the best place in the world to catch them.” 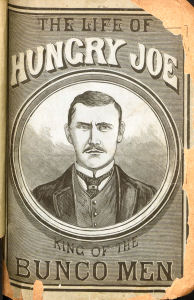 It was always a saying with Joe that there was a sucker born every minute, and all through his business career he acted on that basis, and generally found a good crop of them.

In October 1888 a New York newspaper described a jewelry-based swindle and the unfortunate souls who were deceived. The article ended with an instance of the saying ascribed to the popular humorist Artemus Ward, pen name of Charles Farrar Browne:[13] 1888 October 6, The Nunda News, Geneseo Suckers, Quote Page 3, Column 4, Nunda, New York. (Old Fulton)

Old men and young men bit alike and the experience, although dearly bought will, no doubt, be a lesson to them. Then, too, they can console themselves with that famous expression of Artemus Ward’s that “there is a sucker born every minute.”

They have long since proved the truth of Mike McDonald’s celebrated maxim that a sucker is born every minute.”

In October 1890 a clothing store ran an advertisement in the “Chicago Tribune” that ascribed to P.T. Barnum a version of the adage with the word “fool”. This was the earliest linkage to Barnum found by QI:[15] 1890 October 19, Chicago Tribune, Advertisement for Willoughby & Hill Clothing Store, Quote Page 39, Column 4, Chicago, Illinois. (ProQuest)

Any of these so-called Dry Goods stores go into the Clothing business by hiring a salesman from some clothing house, send him down to New York, and when he returns they “ADVERTISE” his purchases 40 per cent LESS than Clothing Store Prices. However, they don’t care a “—–” what they say in the papers, anything to get the crowd. Barnum said many years ago that a fool was born every minute.

The “Immortal” Barnum said every minute a new fool is born, and he catered that way and was successful. He could have kept successfully a “Department” Store.

In July 1892 a newspaper in Victoria, British Columbia reprinted a tale from a Montreal paper about a young Englishman who was swindled. The introduction presented an instance of the adage with the word “sucker”. This was the first linkage of Barnum to the “sucker” version of the maxim found by QI:[17] 1892 July 21, The Daily Colonist (Victoria Daily Colonist), The Old, Old Story, Quote Page 5, Column 1, Victoria, British Columbia, Canada. (Old Fulton)

The appended sad story is clipped from the Montreal Herald of July 13, and, will be read with interest by Victorians: “The late P. T. Barnum, the king of showmen, often remarked that there was a sucker born every minute, and one of the slick gentlemen in Montreal evidently believes that it is true.”

In October 1892 the maxim was again ascribed to the defrauder Joseph Lewis, aka Hungry Joe, in the pages of a New York newspaper:[18] 1892 October 11, The Sun, The Hussar’s Treasure: Again the Rainbow Vanishes at Whose Foot It Lies, Quote Page 7, Column 5, New York. (Old Fulton)

When Inspector Williams was only a Captain, and the notorious bunco steerer “Hungry Joe” was in the zenith of his very questionable fame, the Captain, in a fit of laudable curiosity, asked the swindling expert how it was that he managed to live so well by his wits.

“Why, don’t you know that there is a sucker born every minute?” Hungry Joe answered, in a tone of honest surprise that the Captain had not discovered the fact.

Secondary and tertiary sources have associated the adage with George Hull, David Hannum, Joseph Bessimer, Adam Forepaugh and others. However, the data in this article is based directly on passages in newspapers and books with known dates.

However, only the fame of P.T. Barnum has endured. Today, the phrase “there’s a sucker born every minute” is often ascribed to him. Yet, support for this ascription is very weak. Citations occurred at the very end of his life and after his death.

(Special thanks to PatriotFan whose query led QI to formulate this question and motivated QI to write up results primarily obtained in 2010. Great thanks to Bill Mullins who located the January 7, 1882 citation. Bill also found a valuable citation using flat in June 1835. Thanks to other ADS discussants. Also thanks to Barry Popik for his valuable research on this topic. In addition, thanks to the volunteer Wikipedia editors and jb5911 who clipped the 1879 citation with “sucker” at newspapers.com)