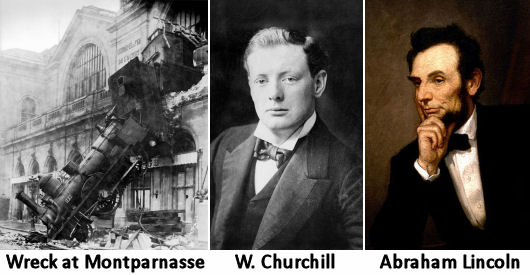 Dear Quote Investigator: Winston Churchill once famously exhorted an audience to “never give in”. There is another saying attributed to him about perseverance. Here are three versions:

I have been unable to find a speech or letter by Churchill containing this expression. Would you please examine this topic?

Quote Investigator: This statement was placed in an appendix called “Red Herrings: False Attributions” in the book “Churchill By Himself” which presented a comprehensive collection of quotations from the prominent statesman edited by Richard M. Langworth who is the top expert in this domain. Langworth noted that the expression has also been attributed to Abraham Lincoln. In the realm of quotations the names of Churchill and Lincoln both attract a profusion of spurious ascriptions:[1]2013 December 12 (Kindle Edition Date), Churchill By Himself (Winston Churchill’s In His Own Words Collection), Compiled and edited by Richard M. Langworth, Appendix I: Red Herrings: False … Continue reading

Success is going from failure to failure without losing your enthusiasm.

Broadly attributed to Churchill, but found nowhere in his canon. An almost equal number of sources credit this saying to Abraham Lincoln; but none of them provides any attribution.

Success has been defined as the ability to go from failure to failure without losing enthusiasm.

An entertaining thematically related passage was published in an article about “Schools and Schoolmasters” in 1913. The author remarked on some schoolmasters whose failures did not impede their ultimate success. Boldface has been added to excerpts:[3]1913 November, The Cornhill Magazine, Schools and Schoolmasters by C. L. Graves, Start Page 646, Quote Page 651 and 652, Published by Smith, Elder & Company, Waterloo Place, London. (HathiTrust … Continue reading

On the other hand, some masters who are neither popular nor efficient are delightful human beings who have simply mistaken their vocation; and the amazing thing is that they sometimes possess a prestige or an influence in virtue of which they achieve resounding success—judged at least by the test of promotion. In short they go from failure to failure, but always on the up-grade leaving messes for their betters to mop up. It is not energy that is wanting, but judgment.

In 1916 a biography of the theater impresario Charles Frohman was released, and the authors stated that his first three productions were not financially successful, but they still highlighted his remarkable abilities. Frohman retained his enthusiasm despite his failures and went on to great success. Thus, his actions thematically illustrated the expression under investigation:[4]1916, Charles Frohman: Manager and Man by Isaac F. Marcosson and Daniel Frohman, Chapter V: Booking-Agent and Broadway Producer, Quote Page 87, Harper & Brothers, New York. (Google Books Full … Continue reading

People now began to talk about the nervy, energetic young man who could go from failure to failure with a smile on his face. It is a tradition in theatrical management that successful starts almost invariably mean disastrous finishes.

In 1941 Winston Churchill delivered a speech at the Harrow School in England during which he emphasized the need for perseverance. The following statement was quite different from the one under investigation, yet the topic and attitude were comparable. Sentiments of this type might help to explain the prevalence of the misattribution:[5]2013 December 12 (Kindle Edition Date), Churchill By Himself (Winston Churchill’s In His Own Words Collection), Compiled and edited by Richard M. Langworth, Entry: never give in, (Quotation … Continue reading[6]2006, The Yale Book of Quotations by Fred R. Shapiro, Section Winston Churchill, Quote Page 153, (Quotation from speech at Harrow School on October 29, 1941) Yale University Press, New Haven. … Continue reading

In 1953 a self-help book for speechmakers called “How to Say a Few Words” included an instance of the saying without attribution as mentioned previously in this article:

Success has been defined as the ability to go from failure to failure without losing enthusiasm.

In March 1953 a New York newspaper column on the subject of religion printed the saying with a slightly different phrasing. The ascription was anonymous:[7] 1953 March 13, The Morning Herald, Lenten Readings: On Going On, Quote Page 25, Column 4, Gloversville and Johnstown, New York. (Old Fulton)

It is when we give up that our souls are in danger. Someone has said, “Success is advancing from failure to failure without losing enthusiasm.”

In 1959 an official periodical of The Methodist Church called “Together” published an article titled “If Failure Could Be Spelled Success” which included an instance of the saying. The credit was given to an unidentified “someone”:[8]1959 August, Together, Volume 3, Number 8, If Failure Could Be Spelled Success by Helen P. Satterfield, Start Page 19, Quote Page 19, (Official monthly organ of The Methodist Church), Published by … Continue reading

Someone has said, “Success is advancing from failure to failure without losing enthusiasm.”

“SUCCESS consists in staggering from failure to failure without loss of enthusiasm.”

“Success is the ability to go from failure to failure without losing your enthusiasm.” (Anonymous)

By the 1980s the expression was no longer anonymous; instead, it had been dubiously assigned to Winston Churchill. “The Seattle Times” newspaper of Washington interviewed an author on a publicity tour in 1987 for the book “Why Smart People Fail” who employed the saying:[11]1987 May 14, The Seattle Times, Edition: Third, Section: Scene, Book Explores Why People With the Right Stuff Go Wrong by Carole Beers, Quote Page E16, Seattle, Washington. (NewsBank Access World … Continue reading

She quoted Winston Churchill: “Success is all about going from failure to failure without losing enthusiasm.”

Successful people learn from their failures and move on. They conclude with Churchill, “Success is going from failure to failure without loss of enthusiasm.”

Urbanski, whom some members tout as a possible successor to AFT President Albert Shanker, says resolutely, “I’m not afraid to fail. Winston Churchill’s definition of success, you know what that is? Going from failure to failure with undiminished enthusiasm.”

The linkage to Abraham Lincoln has also been widely disseminated. Here is an example from a newspaper in New Orleans, Louisiana in 2001:[14]2001 February 22, The Times-Picayune, Section: Marrero Picayune, Column: Lafitte Lagniappe, Fisher students travel to capital – Seeing inauguration highlight of the trip by Beatrice Robin, … Continue reading

Thought for week: “Success is going from failure to failure without loss of enthusiasm.”
Abraham Lincoln

In conclusion, there is no substantive evidence that Winston Churchill or Abraham Lincoln crafted this saying. The first instances located by QI were printed in the 1950s and were anonymous. QI thinks that future researchers will probably find earlier examples as databases grow.

Over a period of time anonymous expressions have sometimes been incorrectly reassigned to famous individuals. Statements appear to be more forceful and memorable when linked to major orators and thinkers.

Image Notes: The Train Wreck at Montparnasse is being used to illustrate the general notion of a disaster/failure. Train image dated 1895 from Studio Lévy and Sons. Young Winston portrait in 1900 from the collections of the Imperial War Museums. Abraham Lincoln oil portrait from George Peter Alexander Healy dated 1869. These three images are from Wikimedia Commons and have been modified and cropped.

(Special thanks to Barry Popik for his valuable research on this saying. Great thanks to Logan Micher, Roberto JC González, and Ruben O. Villarreal whose inquiries and comments led QI to formulate this question and perform this exploration. Thanks to Isaac Levine who identified a typo in the image notes section.)