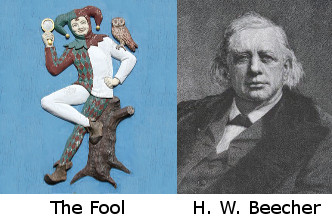 Quote Investigator: The earliest evidence known to QI was published on April 27, 1870 in the “Daily Evening Traveller” of Boston, Massachusetts. Boldface has been added to excerpts: 1

The anecdote from the “The New York Ledger” was reprinted widely in 1870. For example, closely matching passages appeared in “The Brooklyn Daily Eagle” of Brooklyn, New York; 2 the “Cleveland Leader” of Cleveland, Ohio; 3 and the “White Cloud Kansas Chief” of White Cloud, Kansas. 4

In 1871 a textbook titled “A Manual of Composition and Rhetoric” by John Seely Hart included the following rephrased account: 5

Henry Ward Beecher once, on the 1st of April, received a letter containing simply the words “April Fool.” He enclosed it to Bonner, with a note, saying, “I have often heard of people’s writing letters and forgetting to sign their name, but I never before heard of a man’s signing his name and forgetting to write the letter.”

One of the almost countless instances of Mr. Beecher’s readiness at repartee occurred a few years ago on the first of April. Some would-be wag sent him a letter containing on a sheet of paper only the words, “April Fool.” Mr. Beecher opened it, and then a delighted smile beamed over his face as he exclaimed: “Well! I’ve often heard of a man writing a letter and forgetting to sign it; but this is the first case of a man signing his name and forgetting to write the letter!”

In 1896 a variant of the anecdote was printed in “The Wichita Daily Eagle” of Wichita, Kansas. The only words on the letter were “You Old Villain”. The joke was oddly ineffective because this phrase was an implausible signature: 7

Judge Campbell yesterday received a letter at the postoffice and on opening it found only the words: “You Old Villain.” He put the letter in his pocket saying: “I have frequently received letters before when the writer forgot to sign his name, but this is the first instance where the writer signed his name and forgot to write the letter.”

In 1899 Justin McCarthy who was a Member of the UK Parliament from Ireland published “Reminiscences” in two volumes. McCarthy presented a different version of the Beecher anecdote in which the letter contained a single word instead of two words: 8

He had a way when he entered his church on the Sunday of taking up any letters which might be addressed to him there; and he sometimes opened one of these and read it out to the congregation, and made it a text on which to hang a discourse. One day he opened such a letter and he found that it contained the single word ‘Fool.’ He mentioned the fact to his congregation, and then quietly added, ‘Now I have known many an instance of a man writing a letter and forgetting to sign his name; but this is the only instance I have ever known of a man signing his name and forgetting to write the letter.’

In 1902 a poem titled “An April Fool” with five stanzas appeared in several periodicals. The poem recounted a version of the anecdote in which “Uncle Robert” was the recipient of the letter. The final three stanzas were the following: 9

It took but little time to read—
A moment but to con it;
The two words “April Fool” were all
That could be found upon it.

Then Uncle Robert laughed and said:
“I’ve heard of funny blunders
In superscriptions and address,
And many puzzling wonders,

“And seen epistles left unsigned.
This goes them all one better;
For here’s a man who signed his name
And forgot to write the letter!”

Image Notes: Illustration of Henry Ward Beecher from the 1807 book “American Eloquence: Studies In American Political History”, Volume 4 of 4, accessed via Project Gutenberg; Image of The Fool from AnnaER at Pixabay. Images have been retouched, cropped, and resized.

(Great thanks to Fred R. Shapiro whose inquiry led QI to formulate this question and perform this exploration. Also, thanks to Katie who suggested that I should post an entry related to April 1. Many thanks to Barry Popik for locating early instances of the anecdote.)