Dear Quote Investigator: The Newseum is a museum in Washington, D.C. featuring exhibits about the history of communication, the news industry, and free expression. A powerful quotation attributed to Abraham Lincoln is engraved into one of its walls:

Let the people know the facts, and the country will be safe.

Quote Investigator: The earliest strong match known to QI appeared in the “Boston Morning Journal” of Boston, Massachusetts on April 17, 1865 a couple days after Lincoln’s death on April 15th. A letter writer identified as “E. K.” reported that he had spoken to Lincoln in July 1864, and E. K. presented remarks he ascribed to Lincoln. Emphasis added to excerpts by QI:[1]1865 April 17, Boston Morning Journal, The Death of President Lincoln, Message to the Editor of The Boston Journal, Quote Page 3, Column 2, Boston, Massachusetts. (Verified with scans of microfilm … Continue reading

Many of his best friends had deserted him, and were talking of an opposition convention to nominate another candidate; and universal gloom was among the people. The North was tired of the war, and supposed an honorable peace attainable, Mr. Lincoln knew it was not—that any peace at that time would be only disunion. Speaking of it, he said: “I have faith in the people. They will not consent to disunion. The danger is, they are misled. Let them know the truth, and the country is safe.”

QI hypothesizes that the modern quotation evolved from the statement above. Here is a list of variant expressions together with citation dates:

The list above represents a snapshot of current findings, and earlier citations for variants may be uncovered by future researchers. Additional details appear below in chronological order.

In 1864 James E. Murdoch published “Patriotism in Poetry and Prose”, and he included a section based on a conversation he claimed he had with Abraham Lincoln before the first inauguration which occurred in March 1861. Lincoln reportedly advocated communicating the facts to the people. A sentiment that partially matched the statement being traced:[2]1864, Patriotism in Poetry and Prose: Being Selected Passages from Lectures and Patriotic Readings by James E. Murdoch (James Edward Murdoch), Mr. Lincoln at Home in Springfield, and Mr. Lincoln at … Continue reading

Let the people know the facts, let them see the danger; but let every effort be made to allay public fears, to inspire the masses with confidence and hope, and, above all, to frown down every attempt to create a panic.

Here is the full article from the “Boston Morning Journal” on April 17, 1865: 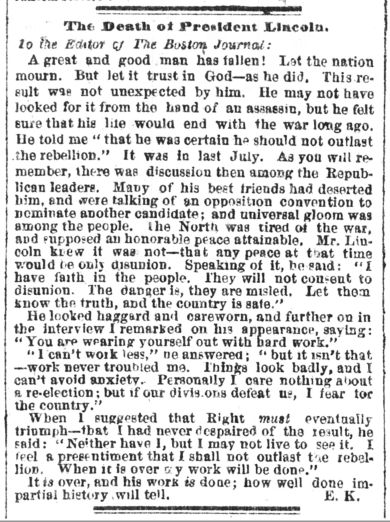 The 1865 report from E. K. which included the first instance of the quotation was reprinted in several newspapers. For example, on April 21 “The Daily Intelligencer” of Wheeling, West Virginia prefaced the note with the following:[3] 1865 April 21, The Daily Intelligencer, Recollections of President Lincoln, Quote Page 2, Column 1, Wheeling, West Virginia. (Newspapers_com)

A correspondent of the Boston Journal gives an account of a conversation with the late President, from which it appears that he had a presentiment that he should not survive the close of the war. The writer says: . . .

. . . Mr. Lincoln knew it was not—that any peace at that time would be only disunion. Speaking of it, he said. “I have faith in the people. They will not consent to disunion. The danger is, they are misled. Let them know the truth, and the country is safe.”

Let the people know the truth, and the country is safe.

Important principles may and must be inflexible.
Let the people know the truth and the country is safe.
I trust I shall be willing to do my duty, though it costs my life.

We feel with Lincoln, “Let the people know the truth and the country will be safe,” but we get fearful sometimes over the question, “What is the truth?” — we can’t answer that question by descending to particulars and turning our schools into political debating halls.

“Let the people know the facts and the country will be saved.—Abraham Lincoln.

Miss Stanley reminded the group of Abraham Lincoln’s words, “Let the people know the facts and the country will be safe.”

In conclusion, there is substantive evidence that Abraham Lincoln delivered the statement in the April 17, 1865 citation; however, this knowledge is indirect. The accuracy of the quotation depends on veracity of the testimony of “E. K.”. During subsequent years the phrasing of the statement evolved and variants proliferated. For example, the pronoun “them” was replaced by “the people” which made the quotation compact and self-contained.

(Great thanks to Terry Teachout of “The Wall Street Journal” whose inquiry led QI to formulate this question and perform this exploration. Special thanks to the research staff at the Boston Public Library (BPL) who sent to QI scans for the “Boston Morning Journal” citation dated April 17, 1865. When QI first contacted BPL he had a citation containing an acknowledgement using the ambiguous designation “Boston Journal”, and BPL determined that the correct newspaper was the “Boston Morning Journal”.

Great thanks to Barry Popik for his pioneering research. Popik’s article included an important citation dated April 29, 1865 that presented the earliest phrasing of the quotation.

Also, thanks to Donna Halper who noticed that the April 17, 1865 citation required an update to mention that the information was acquired from the Boston Public Library.)