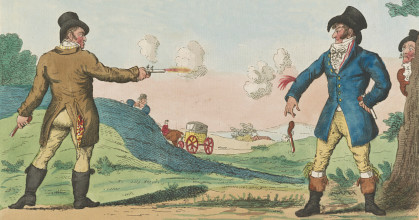 Dear Quote Investigator: When I was a child I heard a circular story, i.e., a story that was designed to be repeated. The details are hazy, but I know there was a duel and a character named Zanzibar. Would you please help me to recover this tale?

Quote Investigator: In April 1952 the journal “Western Folklore” published an article by Donald M. Richardson of Berkeley, California that presented a circular tale. Boldface added to excerpts by QI: 1

Richardson did not create this tale. He was simply reporting that he had heard it. QI has also located an earlier citation circa 1941, but QI has not yet verified the citation with hardcopy or scans. The details are given in the addendum attached to this article.

In October 1952 “Western Folklore” published an article on this topic by William L. Alderson of Reed College who relayed another version from an unnamed informant. Interestingly, the informant recalled that the tale had been dramatized within a one-man-show staged in a school auditorium in the 1920s: 2

One evening, feeling a trifle weary, I stopped into a wayside inn, and to the man on my right I said, “I killed a man tonight!”

I, being the challenged, had my choice of weapons. I chose—the revolver. That night we met outside the gates of Paris, stood back to back, walked the allotted ten paces, and I turned and fired, and fired again, into a writhing figure. And the feeling a trifle weary, I stopped into a wayside inn, etc.

The name of the deceased individual is slightly lengthened during each iteration: Zanzibar becomes Zanzanzibar, Zanzanzanzibar and longer until the performer senses that the audience has seen enough.

In 1954 “Western Folklore” reported a version from informant Olwyn Orde Browne who learned the tale while attending a girls’ camp in southern California: 3

At dawn we met outside the city gates of Paris. We had a duel. I killed him. That evening, feeling depressed, I stepped into a wayside inn…. etc.

The repetition is stopped when someone intervenes and changes the answer to the name question from Zanzibar to Smith.

In 1955 “Fun with Skits, Stunts, and Stories” by Helen and Larry Eisenberg included a version. The performance begins with four people who each deliver their lines melodramatically in succession. Each time a character expires one person leaves the stage: 4

In 1964 the “Army Research and Development” periodical based in Washington D.C. printed an instance of the story. The informant was Dr. T. K. Steele of Bulova: 5

And so we met outside the gates of Paris, and owing to the fact that I was a much better man than my adversary I defeated him. I then adjourned to a tavern. I said to a stranger, “I killed a man.”

And so we met outside the gates of Paris, and owing to the fact that I was a much better man than my adversary. . . . (And so the tale repeats itself ad infinitum.)

In conclusion, the phrasing of this circular tale is highly variable. Some phrases occur in multiple instances, e.g., “killed my brother”, “outside the gates of Paris”, and “rusty, trusty pistol”. In addition, the name “Zanzibar” is preserved in most tellings. It was published by 1952, and there is testimony in 1954 that the tale was circulating in the 1920s. Also, if the citation in the addendum is verified then the tale was published by 1941.

Image Notes: Title: The slang duellists a shot at a hawke or the wounded pigeon!, Creator: Isaac Cruikshank, Date Published: June 20 1807, Source: British Cartoon Prints Collection of the Library of Congress. Image has been retouched, resized, and cropped.

(Great thanks to John Cowan whose inquiry led QI to formulate this question and perform this exploration. Cowan heard tale around 1968. He authored a blog post on the topic in 2006 and commenters shared numerous variants.)

Addendum: The following information is based in data from the Google Books database and the HathiTrust database. The information is incomplete, and it may be inaccurate because it has not yet been verified with hardcopy or scans. The spelling “Zanzabar” occurs in the source document.

‘Twas a dark and stormy night. Just outside the gates of Paris. I had my rusty, trusty pistol. I aimed, I fired, my opponent sank into the arms of his second. I rushed to a nearby Cafe, where a tall and distinguished gentleman approached me.