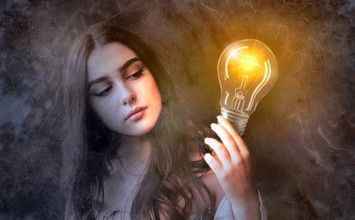 “I jumped up and went to the typewriter and wrote a poem called The Nefertiti-Tut Express,” recalls Bradbury. “You’ve got to write fast or your idea turns to sludge.”

The poem, like all of his works, sprang full-blown from his imagination. “Don’t think!” commands Bradbury. “Thinking is the enemy of creativity. It’s self-conscious, and anything self-conscious is lousy. You can’t try to do things. You simply must do things.”

EJ: Those things have nothing to do with the creative process except to impede it. If a novelist is stupid enough to listen, they create self-consciousness which is the enemy of art, the enemy of creation. I cannot see that that does anything to help the writing of books. Maybe it’s good at some point in your life to help organize your view of literature.

PREVIOUS SOLUTION: “Don’t think. Thinking is the enemy of creativity. It’s self-conscious, and anything self-conscious is lousy. You can’t try to do things. You simply must do things.” — Ray Bradbury

Replays
“Thinking is the enemy of creativity.”
—Ray Bradbury

Salutatorian Jessie F. McComb drew on advice from writer Ray Bradbury: “Don’t think. Thinking is the enemy of creativity.” The class of 1999 was innovative, she said, starting several new programs and leaving behind artwork on the school’s walls.

In conclusion, Ray Bradbury should receive credit for the comments he made in 1962, 1971, and 1980. Erica Jong made a similar remark about self-consciousness in 1981.

Image Notes: A woman symbolically contemplates the mysteries of creativity. Image from KELLEPICS at Pixabay. Image has been cropped and resized.

(Great thanks to Pam McLaughlin whose inquiry posted to the Wombats mailing list led QI to formulate this question and perform this exploration. Special thanks to discussant S. M. Colowick who pointed to “Zen in the Art of Writing”.)