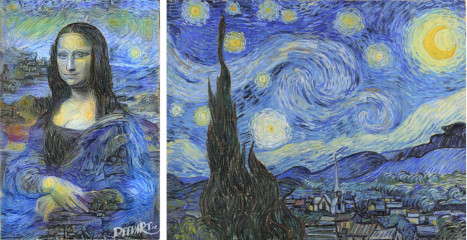 The notion that the writings of an author often display a style that pinpoints identity has a long history. In 1621 Robert Burton referred to a Latin saying while stating that style betrays us. The irregular spelling in this passage is from the original text:[2]1621, Title: The anatomy of melancholy vvhat it is. VVith all the kindes, causes, symptomes, prognostickes, and seuerall cures of it. In three maine partitions with their seuerall sections, members, … Continue reading

It is most true, stylus virum arguit, our style bewrayes vs, and as hunters find their game by the trace, so is a man descried by his writings.

A writer’s voice lives in his or her bad habits. That’s the heart of a voice. The trick is to make them charming bad habits. You have to leave some of them alone—basically, leave enough in, so that, if you’re Grace Paley, readers know it’s Grace Paley.

In 2002 Neil Gaiman spoke to Joe McCabe and made pertinent remarks about style as described at the beginning of this article.

I don’t think there’s anything wrong with trying on styles when you’re starting out — it’s like borrowing hairstyles or hats. And there’s many a time that a facility for being able to imitate a certain voice or style has got me out of trouble as a writer. And sometimes it’s fun. Eventually, if you write enough, you start sounding like yourself (style is, as someone once said, the stuff you can’t help doing).

HW: A consistent aspect of your work is how you touch more on the mythic themes that transcend culture, working with themes that reflect the human condition. Is that something you deliberately set out to do?

NEIL: I think Jerry Garcia said, “Style is the stuff you get wrong.” My tendency to go mythic, it’s not something I really think much about; it’s not like I sit down and say, “I think I’ll go mythic today.”

I started to realize that style is not an affectation—it’s the stuff that you can’t help doing. I remember running into a quote once years ago from Jerry Garcia of the Grateful Dead, where he said, “Style is the stuff you got wrong.” Because if you took him out, the person, everything would be played beautifully and perfectly—the falling away from perfection is what we recognize, and that makes style.

It’s a fascinating quote, but when I went to Google it, all I was ever able to find was me saying it quoted in interviews. (Perhaps he never said it at all.) But there’s definitely that feeling that, at the end of the day, style is the stuff you can’t help doing.

There was a thing that I thought was a Jerry Garcia quote, but I have googled it now many times and the only person I have found either saying the quote or attributing it to Jerry Garcia is me. (JMS: [laughter]) Your guess is as good as mine, but, it’s that, “Style is the stuff you get wrong.” The idea being that if you wrote absolutely—if you were writing perfectly style-free, you would be writing perfect prose. It’s the stuff that you give up on, it’s the stuff that you don’t do right that tells people it’s you.

In conclusion, the identity of the creator of the first adage is uncertain. Neil Gaiman used it in 2002, but he credited Jerry Garcia. It has not yet been located in the interviews or writings of Garcia.

QI tentatively credits Gaiman with the second adage because he employed an instance in 2002 without attribution. Later Gaiman credited Garcia with the statement, but QI conjectures that Gaiman mentally combined the two adages in his memory and this jumble led to confusion.

Perhaps future researchers will uncover germane statements from Jerry Garcia that will clarify the situation.

(This exploration was initiated by QI when he heard Gaiman use the second adage during a video lesson titled “Finding Your Voice” within the author’s MasterClass series. Gaiman credited Garcia, but also described his uncertainty. Special thanks to Ben Yagoda who pointed to pertinent material in his book “The Sound on the Page: Style and Voice in Writing”. Yagoda also mentioned the passage in “The anatomy of melancholy”.)

Update History: On December 11, 2019 the citations for “The Sound on the Page” and “The Anatomy of Melancholy” were added.