Dear Quote Investigator: A visitor to a large business watched as numerous workers moved purposefully along the hallways into offices. The visitor approached the leader of the company and asked:

“This is such a busy place! How many people work here?”

The leader pondered the question carefully and replied:

“I would guess about forty percent.”

I have heard many versions of this joke. In one instance, the location was Vatican City, and the punchline was spoken by the Pope. Would you please explore this topic?

The issue containing the joke was undated, but it was the eighth weekly issue of 1907, so it probably appeared around late February.

Misunderstood
“How many people work in your office?”
“Work? Perhaps two-thirds of them.”
—Translated for Transatlantic Tales from “Fliegende Blätter.”

The cover date of “Transatlantic Tales” was November 1907, but the issue was available before the cover date. A newspaper in Harrisburg, Pennsylvania published a matching joke on October 19, 1907 while acknowledging “Transatlantic Tales” and noting that the original source was “Fliegende Blaetter”.[3] 1907 October 19, The Star-Independent, Misunderstood (Filler item), Quote Page 9, Column 7, Harrisburg, Pennsylvania. (Newspapers_com) The word “Blaetter” was an alternative spelling of “Blätter”.

The other-people’s-business man persisted in trying to extract information from a prosperous looking elderly man next him in the Pullman smoker.

“How many people work in your office?” he asked.

“Oh,” said the elderly man, getting up and throwing away his cigar, “I should say, at a rough guess, about two-thirds of them.”

The First Clerk: How many people work in your office?
The Second Clerk: Oh, I should say roughly about a third of them. 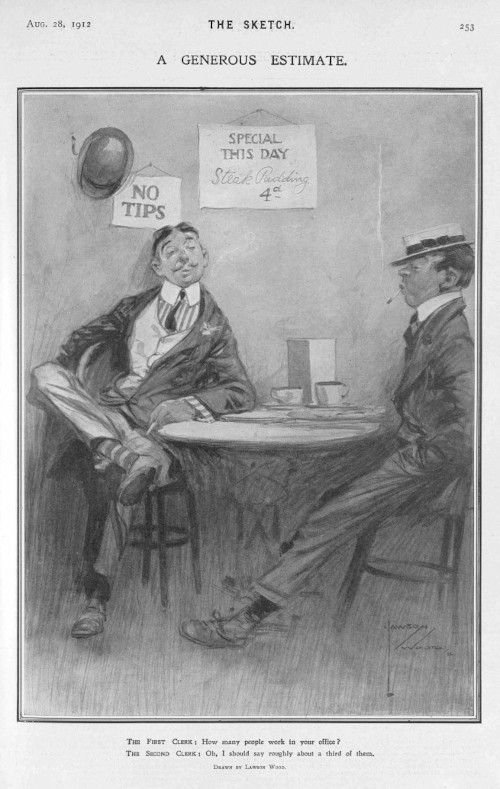 Some U.S. periodicals reprinted the dialog above without the cartoon. For example, in December 1912 “The Tradesman” of Chattanooga, Tennessee shared the jest with its readers while acknowledging “The Sketch”.[9]1912 December 19, The Tradesman: The South’s Authoritative Industrial Trade Journal, Volume 68, Number 25, Some Good Stories Briefly Related in a Lighter Vein: The Proper Ratio, Quote Page 50, … Continue reading

Last week I asked a manufacturer, “How many people work in your offices?” He replied, somewhat sarcastically, “About half of them.”

CHARLES M. SCHWAB tells a story about a type of a man he often meets, the sort he calls the “other-people’s business-man.”

“I overheard a conversation between one of these men and a large, prosperous-looking gentleman. It was in a smoking-car. They were sitting together.

“After a few puffs of his cigar the inquisitive man inquired of his neighbour, ‘How many people work in your office?’

“The prosperous-looking gentleman slowly bit the end off of a fresh cigar, and buried himself in his paper as he replied: ‘At a rough estimate I should say about two-thirds of them.'”

I was standing outside the main entrance of the Fox Art Hills Studios talking with the late Edgar Wallace. We were both without hats, and a party of Hollywood sightseers came along, and mistaking us for a couple of officials of the studio, one of then addressing Mr. Wallace, asked politely, “Do many people work here?” Edgar scratched his head for a moment, and then answered politely, “Well—er—about one-third of them.”

In 1939 a correspondent of “The Birmingham Post” assigned the punchline to a staff member at the League of Nations:[13] 1939 May 22, The Birmingham Post, Financial Position of the League: British Empire’s Big Contribution, Quote Page 7, Column 6, Birmingham, Warwickshire, England. (British Newspaper Archive)

The Secretariat loves a joke, especially one at its own expense. An American visitor in the old easy-going days once contemplated the League building and asked a member of the staff “How many people work here?” “Oh,” was the reply, “about 40 per cent.” Nowadays the answer would be: “Everybody, a full day’s work—and then some.”

The bishop was impressed by a large retinue of workers in the Vatican.
“How many people work here?” he asked the pope.
“About half of them” the pope replied.

In conclusion, this quip entered circulation by 1907. It appeared in the German humor magazine “Fliegende Blätter” in late February of 1907. Hence, the creator may have been a staff member or correspondent of “Fliegende Blätter”. Next, it appeared in English within “Transatlantic Tales” and U.S. newspapers in October 1907. The German source received acknowledgment. Over time a wide variety of anecdotes have evolved which contain instances of the punchline.

Image Notes: Image of St. Peter’s Basilica in the Vatican City and St. Peter’s Square by Giovanni Battista Piranesi. Image has been cropped, retouched, and resized.

(Many thanks to Joe Stynes, Daniel Rentzsch, and Peter Reitan who searched for the German version of the joke based on the acknowledgement information provided in “Transatlantic Tales”. The search concluded successfully. Also thanks to Dan Goncharoff and Joe Stynes for estimating the publication date in “Fliegende Blätter”. Great thanks to Eccles whose inquiry led QI to formulate this question and perform this exploration. In addition, thanks to Barry Popik for his helpful research. Popik located multiple instances of the joke beginning in 1918 together with a 1963 version with the punchline attributed to the Pope.)