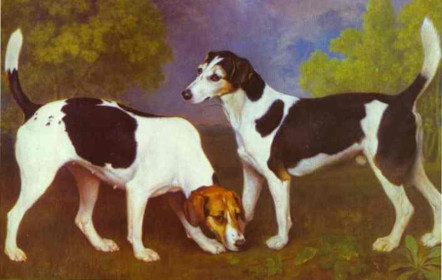 Dear Quote Investigator: The faithfulness and love exhibited by a pet dog can lead to an idealized perception. The Czech writer Milan Kundera has received credit for the following remark:

Dogs are our link to paradise.

I am uncertain about the accuracy of this attribution because I have been unable to find a citation. Would you please help?

Quote Investigator: The earliest strong match located by QI occurred in a 1994 article in “The New York Times” by gardening columnist Anne Raver. She discussing the death of her beloved dog Molly, and she referred to the novel “The Unbearable Lightness of Being” by Milan Kundera which included the depiction of a cherished dog approaching its final years. Boldface added to excerpts by QI: 1

Dogs, Mr. Kundera says, are our link to Paradise. They don’t know evil or jealousy or discontent. To sit with a dog on a hillside on a glorious afternoon is to be back in Eden, where doing nothing was not boring — it was peace.

It is essential to note that the opinion Raver ascribed to Kundera was not enclosed in quotation marks. QI believes that Raver was using her own words to present a summary of Kundera’s viewpoint. Later writers improperly placed the statement between quotation marks and attributed the words directly to Kundera.

Kundera published “The Unbearable Lightness of Being” in 1984, and passages in the book do support some of the notions presented by Raver although the phrasing was different.

For example, the character Tereza observed that her dog Karenin did not express disgust regarding basic bodily functions. She concluded that the dog’s psychology reflected a prelapsarian existence: 2

The answer seems simple to me: dogs were never expelled from Paradise. Karenin knew nothing about the duality of body and soul and had no concept of disgust.

Also, the character Tereza discussed an idyll that was analogous to being “back in Eden”: 3

No one can give anyone else the gift of the idyll; only an animal can do so, because only animals were not expelled from Paradise. The love between dog and man is idyllic. It knows no conflicts, no hair-raising scenes; it knows no development.

Raver’s article containing the quotation under examination appeared in 1994 as mentioned previously. Her article achieved further circulation when it was reprinted in “The Gardener’s Almanac: Featuring Tips, Truths, and Forecasts” in 1997. 4

In 2002 “The Dog Lover’s Companion to New York City” attributed the quotation to Kundera: 5

Dogs are our link to paradise. They don’t know evil or jealousy or discontent. To sit with a dog on a hillside on a glorious afternoon is to be back in Eden, where doing nothing was not boring — it was peace.
— Milan Kundera

In 2005 best-selling novelist Jan Karon included the quotation in “Light from Heaven” which was part of the Mitford series: 6

He closed his eyes, and laid a hand on his dog, who drowsed beside him. “Dogs are our link to paradise,” Milan Kundera had said; he’d jotted it in his quote book. “To sit with a dog on a hillside on a glorious afternoon is to be back in Eden, where doing nothing was not boring, it was peace.”

In October 2020 the newsletter of British quotation expert Nigel Rees printed an inquiry from a correspondent. The inquirer noted that Kundera had been credited with the quotation in a 2000 citation, but the origin was uncertain. 7

In conclusion, Milan Kundera deserves credit for the passages given above from the English translation of his 1984 novel “The Unbearable Lightness of Being”. Anne Raver was inspired by Kundera’s words, and she crafted the quotation under examination. Her statement was not a direct quotation from Kundera.

Image Notes: Painting of two dogs by George Stubbs circa 1792.

(Great thanks to Nigel Rees whose newsletter printed an inquiry which led QI to formulate this question and perform this exploration.)