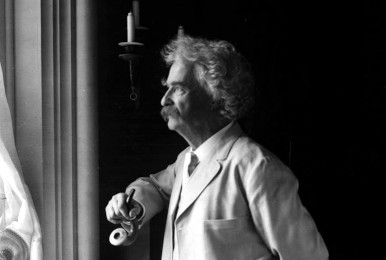 Dear Quote Investigator: Mark Twain once spoke about the number of fools in the world. He did not believe that there were too many fools, but he did suggest that lightning strikes were not ideally distributed. Would you please help me to find a citation for this quip which presents the precise phrasing employed by Twain?

Quote Investigator: The earliest match located by QI appeared in a slim volume titled “More Maxims of Mark” containing quotations ascribed to Twain which was privately printed as a limited edition of fifty copies in November 1927 by Merle Johnson who was a rare book collector. Johnson published the first careful bibliography of Twain’s works in 1910 shortly after the writer’s death. Twain scholars believe that the sayings compiled by Johnson in this book are genuine.

The Rubenstein Rare Book Library at Duke University holds copy 14 of 50, and a friend of QI’s was able to access it. The adage appears on page 13. Below is the saying together with the two preceding items. All the maxims in the work were presented in uppercase. Boldface added to excerpts by QI:[1]1927, More Maxims of Mark by Mark Twain, Compiled by Merle Johnson, Quote Page 13, First edition privately printed November 1927; Number 14 of 50 copies. (Verified via image; thanks to the Rubenstein … Continue reading

THE TIME TO BEGIN WRITING AN ARTICLE IS WHEN YOU HAVE FINISHED IT TO YOUR SATISFACTION.

THE TROUBLE AIN’T THAT THERE IS TOO MANY FOOLS, BUT THAT THE LIGHTNING AIN’T DISTRIBUTED RIGHT.

He still had violent rages now and then, remembering some of the most notable of his mistakes; and once, after denouncing himself, rather inclusively, as an idiot, he said:

“I wish to God the lightning would strike me; but I’ve wished that fifty thousand times and never got anything out of it yet. I have missed several good chances. Mrs. Clemens was afraid of lightning, and would never let me bare my head to the storm.”

The above passage supported the authenticity of the 1927 quotation because Twain did call for lightning to strike an idiot, himself.

The 1948 collection “Mark Twain at Your Fingertips” compiled by Caroline Thomas Harnsberger included the saying under the topic heading “Lightning”; however, the grammar of the phrasing was regularized. The contraction “ain’t” was changed to “isn’t”, and the word “is” was changed to “are”:[3] 1948, Mark Twain at Your Fingertips by Caroline Thomas Harnsberger, Topic: Lightning, Quote Page 240, Cloud, Inc., Beechhurst Press, Inc., New York. (Verified on paper)

The trouble isn’t that there are too many fools, but that the lightning isn’t distributed right.
P. 13—More Maxims of Mark [1927]

The trouble isn’t that there are too many fools, but that the lightning isn’t distributed right.
—Johnson, More Maxims of Mark, 1927, p. 13

The trouble ain’t that there is too many fools, but that the lightning ain’t distributed right.

In conclusion, Mark Twain should receive credit for the quip printed in the 1927 book “More Maxims of Mark” compiled by Merle Johnson . The publication was posthumous, but Twain scholars do accept Johnson’s compilation. The version of the saying listed in the 1948 and 1972 compilations was slightly altered.

Image Notes: Portrait of Mark Twain circa 1907 from Underwood & Underwood via the Library of Congress and Wikimedia Commons. The image has been cropped and resized.

(Great thanks to Gillian Wiseman whose inquiry led QI to formulate this question and perform this exploration. Wiseman provided QI with the correct phrasing together with a 2002 citation. Special thanks to Stephen Goranson who told QI about the intriguing 1912 citation.)