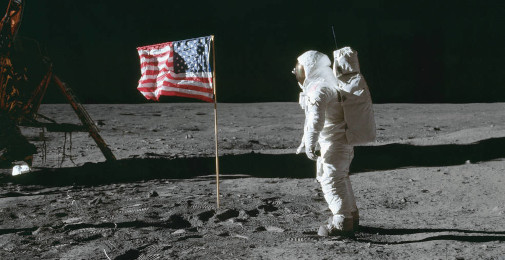 Dear Quote Investigator: A famous science fiction (SF) author was fearful that nationalistic and jingoistic impulses were driving conflict on Earth and endangering the future of humankind. The author hoped that space exploration would redirect and lessen those passions.

A flag flapping in the breeze is a traditional signifier of allegiance, but there are no gusts of wind in outer space. Also, there is no atmosphere on the moon. The SF author said something like:

There is hopeful symbolism in the fact that flags do not wave in a vacuum.

Quote Investigator: In July 1969 emissaries from Earth were poised to land on the moon for the first time. To mark the occasion the editors of “Time” magazine requested an essay from SF author Arthur C. Clarke who described his dreams and predictions. Boldface added to excerpts by QI:[1] 1969 July 18, Time, To the Moon: Special Supplement, Beyond the Moon: No End by Arthur C. Clarke, Start Page 31, Quote Page 31, Column 3, Time Inc., New York. (Verified with scans)

There is always the fear, of course, that men will carry the curse of their animosities into space. But it is more likely that in the long run, those who go out to the stars will leave behind the barriers of nation and race that divide them now. There is a hopeful symbolism in the fact that flags will not wave in a vacuum; our present tribal conflicts cannot be sustained in the hostile environment of space.

The NASA picture above shows Apollo 11 astronaut Buzz Aldrin together with the U.S. flag at Tranquility Base. A metal rod sewn inside the top edge of the flag prevented it from drooping. Perhaps Clarke underestimated the desire to retain symbols.

In July 1969 a newspaper in Idaho reprinted excerpts from Clarke’s essay including the quotation. The essay was introduced as follows:[2] 1969 July 25, South Idaho Press, Progress of Mankind, Quote Page 4, Column 1, Burley, Idaho. (Newspapers_com)

In 2000 a newspaper in Indiana printed a slightly altered version of the quotation. The phrase “will not wave” became “do not wave”. Also, the attribution was misspelled. The final “e” of Clarke was omitted:[3] 2000 July 1, The Herald, Section: Stars & Stripes, (Quotation below picture), Quote Page 3, Column 1, Jasper, Indiana. (Newspapers_com)

‘There is a hopeful symbolism in the fact that flags do not wave in a vacuum.’ — Arthur C. Clark

In conclusion, Arthur C. Clarke deserves credit for the statement he wrote in “Time” magazine in July 1969. Some instances of the quotation have been slightly altered via the replacement of “will not wave” with “do not wave”.

(In 2005 Gary Westfahl published “Science Fiction Quotations: From the Inner Mind to the Outer Limits”. Westfahl had difficulty finding solid citations for some quotations, and afterwards he posted an article to his website “World of Westfahl” listing this quotation and others that were difficult to trace. Great thanks to quotation expert Fred Shapiro who mentioned Gary Westfahl’s list.)