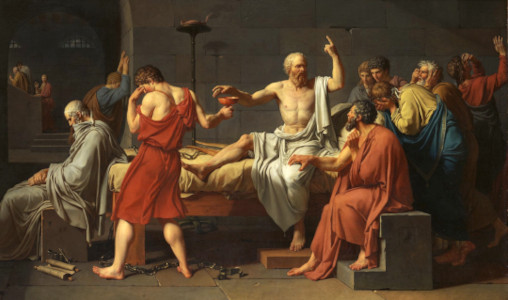 Dear Quote Investigator: The willingness to become a martyr in the service of a noble cause is often celebrated, but the U.S. novelist Paul Eldridge voiced a sardonic viewpoint. He suggested that an individual is willing to die for an elevated idea primarily because the idea is unclear. Would you please help me to find a citation.

Man is willing to die for any idea, provided that idea is not quite clear to him.

If we condemn and torture ourselves, rest assured that torture and condemnation please us, at least, for the time being. We are incapable of really hurting ourselves.

Penning an acerbic reaction to the notion of “dying for an idea” did not begin with Eldridge. For example, in 1860 “Harper’s Weekly ” listed the following item under the title “Humors of the Day”:[2] 1860 March 3, Harper’s Weekly, Humors of the Day, Quote Page 131, Column 3, Harper & Brothers, New York. (Google Books Full View) link

The men who are willing “to die for an idea” would be much better employed in living for a reality.

On the other hand, praise for individuals willing to die for a principle was expressed by an orator in 1875:[3]1875 December, The Southern Magazine, Volume 17, Orations at the Unveiling of the Statue of Stonewall Jackson, Location: Richmond, Date: October 26, 1875, Oration by Reverend Moses D. Hoge, Start … Continue reading

A soldier’s parole is a sacred thing, and the men who are willing to die for a principle in time of war, are the men of all others most likely to maintain their personal honor in time of peace.

Paul Eldridge’s comment in “Cornucopiae” caught the eye of a journalist in a Logan, Utah newspaper who wrote the following in September 1925:[4] 1925 September 12, The Journal, Broad Views and Cross Sections by Solon R. Barber, Quote Page 10, Column 1, Logan, Utah. (Newspapers_com)

Paul Eldridge once said: “Man is willing to die for any idea provided that idea is not quite clear to him.”

A man who will willingly become a martyr for an ideal which is perfectly clear to him, then, by definition, becomes a hero indeed.

The Summer 1942 issue of the journal “Books Abroad: An International Quarterly” printed a version of the quotation as a filler item. The phrase “any idea” was changed to “an idea”. The remainder was unaltered:[5] 1942 Summer, Books Abroad: An International Quarterly, Volume 16, Number 3, (Filler item), Quote Page 308, University of Oklahoma Press, Norman, Oklahoma. (JSTOR) link

“Man is willing to die for an idea, provided that idea is not quite clear to him.” — Paul Eldridge

In 1943 Eldridge authored “Horns of Glass” which included an instance with “willing to” changed to “ready to”:[6] 1943, Horns of Glass by Paul Eldridge, Quote Page 15, Harbinger House, New York. (Verified with scans)

Man is ready to die for an idea, provided that idea is not quite clear to him.

1. Man is ready to die for an idea, provided that idea is not quite clear to him.
2. Many a crown of wisdom is but the golden chamberpot of success, worn with pompous dignity
3. Many a necklace becomes a noose.

The recurrent threats of war around the globe point up the painful truth of Paul Eldridge’s observation that “Man is ready to die for an idea, provided that idea is not quite clear to him.”

In 1965 Eldridge authored “Maxims for a Modern Man”, and he included another slightly different instance. The word “that” was changed to “the” and “quite” was deleted:[9] 1965, Maxims for a Modern Man by Paul Eldridge, Topic: Ideas, Number 1456, Quote Page 170, Thomas Yoseloff, New York. (Verified with hardcopy)

Man is ready to die for an idea, provided the idea is not clear to him.

In conclusion, Paul Eldridge deserves credit for this saying which he first employed in 1925. During subsequent decades he crafted two additional close variants.

Image Notes: Painting of “The Death of Socrates” by Jacques-Louis David circa 1787. Image has been cropped, resized, and retouched.

(Thanks to Jeffrey Graf and the Herman B Wells Library at Indiana University in Bloomington for accessing the 1925 citation in “This Quarter”. Also, thanks Donna Halper for finding the September 12, 1925 citation and offering cogent feedback. In addition, thanks to S. M. Colowick and The New York Public Library system for accessing “Horns of Glass”. Further thanks to Stephen Goranson for his efforts.)