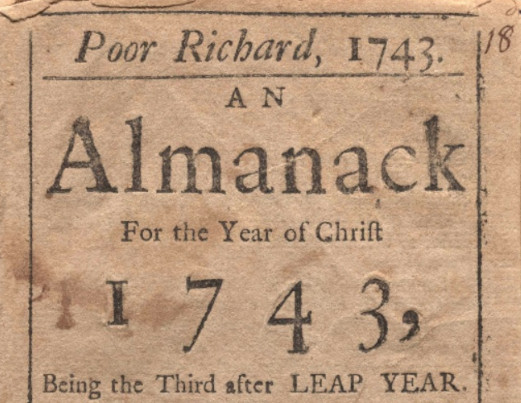 Dear Quote Investigator: Some people are only able to learn via direct experience. They disregard the lessons and the struggles of others. Yet, this experiential approach can be quite costly. The fees incurred may be measured in time expended, energy drained, money squandered, and injuries suffered.

The statesman Benjamin Franklin said something like: the school of experience is very expensive. Would you please help me to find a citation?

Quote Investigator: Benjamin Franklin published a popular series of books called “Poor Richard’s Almanack”, and the adage under examination appeared in the almanac for 1743 on the page dedicated to December. The words below have been underlined in red within a scan of the page. The adjective “dear” means high-priced, costly, or expensive in the context below:[1]1743, Poor Richard: An Almanack For the Year of Christ 1743, Being the Third after LEAP YEAR, Benjamin Franklin, Month: December, Philadelphia, Pennsylvania. (Source: University of Pennsylvania … Continue reading

Experience keeps a dear school,
yet Fools will learn in no other. 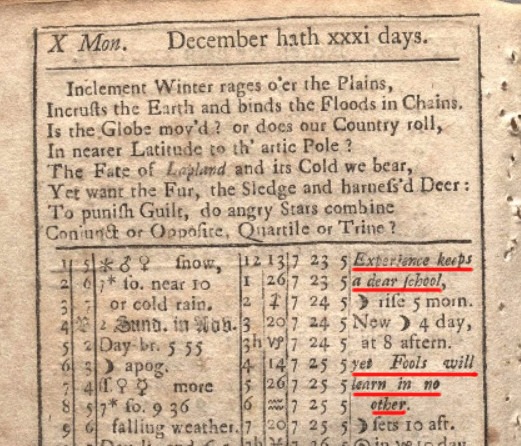 But, to conclude, “Experience keeps a dear School, but Fools will learn in no other, and scarce in that; for, it is true, we may give Advice, but we cannot give Conduct,” as poor Richard says: However, remember this, “that if you will not hear Reason, she will surely rap your Knuckles.”

Experience, indeed, will teach him, for ‘Experience is the best of schoolmasters; only the school-fees are heavy.’

After all, dear bought experience is the only effectual schoolmaster.

Experience keeps a dear school, yet fools will learn in no other.
BENJAMIN FRANKLIN: Poor Richard’s Almanac, 1743

Experience keeps a dear school, but fools will learn in no other.
Benjamin Franklin
Poor Richard’s Almanack, 1743

In conclusion, Benjamin Franklin placed the adage into the 1743 edition of “Poor Richard’s Almanack”. Franklin sometimes lifted sayings from previous compilations of quotations and proverbs; however, QI has not yet found an earlier match. Hence, Franklin deserves credit for popularizing the expression, and he may have crafted it.

Image Notes: Partial scan showing the title on the cover of the 1743 edition of “Poor Richard’s Almanack” published by Benjamin Franklin.

(Great thanks to the anonymous person who inquired about a quotation attributed to Minna Antrim. While researching that quotation QI was led back in time to the adage printed by Benjamin Franklin and to many other thematically similar remarks. A separate future article will discuss the Antrim remark.)