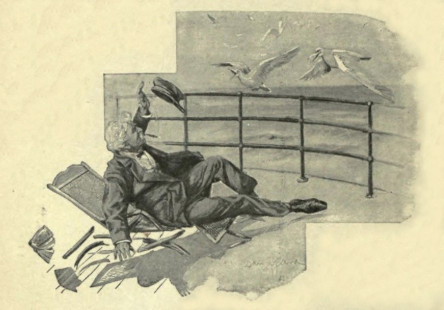 Dear Quote Investigator: Mark Twain once spun a tale in which he won an argument by concocting a fake quotation. His successful deception led him to pronounce a maxim similar to this: Any invented quotation, spoken with confidence, will be accepted by listeners. Would you please explore this topic?

Quote Investigator: Mark Twain published his popular travel book “Following the Equator: A Journey Around the World” in 1897. He described a dinner with companions who disagreed about the pronunciation of the word “three” by common Scottish people. The two options were “three” and “thraw”. Twain created a verse he attributed to the prominent Scottish poet Robert Burns that rhymed the word with “knee”. Twain won the argument because of the prestige of the poet. Boldface added to excerpts by QI: 1

“Does Robbie Burns say — what does he say?”

“This is what he says :
“There were nae bairns but only three —
Ane at the breast, twa at the knee.”

It ended the discussion. There was no man there profane enough, disloyal enough, to say any word against a thing which Robert Burns had settled. I shall always honor that great name for the salvation it brought me in this time of my sore need.

It is my belief that nearly any invented quotation, played with confidence, stands a good chance to deceive. There are people who think that honesty is always the best policy. This is a superstition; there are times when the appearance of it is worth six of it.

One hundred years later the statement was included in the 1996 collection “When In Doubt, Tell the Truth and Other Quotations from Mark Twain” edited by Brian Collins: 2

It is my belief that nearly any invented quotation, played with confidence, stands a good chance to deceive. There are some people who think that honesty is always the best policy. This is a superstition; there are times when the appearance of it is worth six of it.
Following the Equator, vol. 1, ch. 5, pp. 57-8. Gabriel Wells (1923). Written in 1897.

The saying also appeared in the 2001 collection “Mark Twain: His Words, Wit, and Wisdom” edited by R. Kent Rasmussen. 3

In conclusion, Mark Twain deserves credit for this quotation which appeared in “Following the Equator” in 1897.

Image Notes: Illustration of Mark Twain interacting with gulls from the 1897 edition of “Following the Equator: A Journey Around the World” by Mark Twain. The illustration appeared in page 26 with the caption “EVEN THE GULLS SMILED”. Image has been resized, retouched, and cropped.

(Great thanks to Dr. Matt Seybold @MEASeybold who mentioned the correct quotation and citation on twitter. This led QI to create this article to further distribute the quotation. Seybold is a Scholar-in-Residence at the Center for Mark Twain Studies and an Associate Professor at Elmira College. Thanks also to Adam Rifkin who pointed to Seybold’s tweet.)