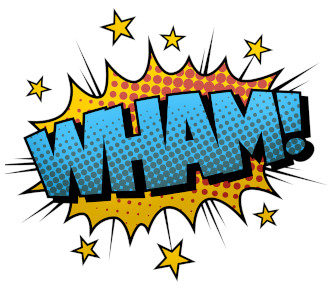 Dear Quote Investigator: I love stories about funny theatrical reviews. A prominent critic once attended a performance of a show called “Wham!” and published the amusingly concise evaluation “Ouch!”

This pithy critique has been attributed to Wolcott Gibbs and Alexander Woollcott who both wrote for “The New Yorker” magazine. Yet, I suspect that this anecdote is fictitious. Would you please explore this topic?

Quote Investigator: The Internet Broadway Database (IBDB) provides no matches for “Wham!” which reduces the credibility of the tale. Alexander Woollcott died in 1943, and Wolcott Gibbs died in 1958.

For What It’s Worth
The shortest criticism in theatrical history was made by drama critic Wolcott Gibbs when he reviewed a farce called Wham!
Gibbs’ only comment was “Ouch!”

This anecdote was doubted by journalist Thomas Vinciguerra who was knowledgeable on this topic. He compiled and published the collection “Backward Ran Sentences: The Best of Wolcott Gibbs from The New Yorker”. Vinciguerra said the following about Gibbs during an interview in 2011:[2]Website: The New Yorker, Interview title: Q. & A. Thomas Vinciguerra on Wolcott Gibbs, Interviewer name: Jon Michaud, Date on website: October 10, 2011, Website description: Essays, commentary, … Continue reading

I first heard of him at age twelve, when I came across him in “The Guinness Book of World Records.” The editors said that the world’s shortest piece of criticism had been “attributed” to him. Supposedly, in reviewing a farce called “Wham!” Gibbs wrote the single-word response “Ouch!” I thought the comment was hilarious, and that Gibbs’s name sounded owlish and prickly—both of which, I later discovered, he was. It didn’t even matter that the review turned out to be apocryphal.

The shortest dramatic criticism in theatrical history was that attributed to Wolcott Gibbs (died 1958), writing about the farce “Wham!” He wrote the single word “Ouch!”

In 1981 “The Book of Heroic Failures” printed an error based on a misreading of the “Guinness Book of World Records”. The author confused “Wolcott” and “Woollcott”. Thus, the joke under examination was incorrectly reassigned from Wolcott Gibbs to Alexander Woollcott. The book used the misspelling “Woolcott”:[6]1981 Reprint (1979 First Publication), The Book of Heroic Failures: the Official Handbook of the Not Terribly Good Club Of Great Britain by Stephen Pile, Quote Page 146, Futura Publications, London. … Continue reading

The Guinness Book of Records mentions Alexander Woolcott’s Broadway review of Wham! which read ‘Ouch!’ But there is one more dismissive. At the Duchess Theatre in London at the turn of the century there opened a show called A Good Time. Next morning it got the simple review, ‘No’.

An even shorter review came from Alexander Woollcott, whose notice for the play Wham! read, ‘Ouch!’

Gibbs is credited by Guinness with the shortest dramatic criticism in theatrical history. Reviewing the Broadway farce Wham! he wrote only “Ouch!”

In conclusion, QI currently believes that this review was concocted as a joke about a non-existent show. There is some weak evidence that Wolcott Gibbs crafted the review; however, no Broadway show called “Wham!” existed during Gibbs’s tenure as a critic, and the earliest attribution to Gibbs appeared in 1965 which is several years after his death in 1958. Conceivably, there is a show with a similar sounding name, and someone created a comparable one-word review, but QI has found no trace of this. Also, the ascription to Alexander Woollcott unsupported.

Image Notes: Public domain illustration of the word “Wham!” in comic book style from an account at Pixabay.

(Great thanks to Jim Fishwick whose inquiry led QI to formulate this question and perform this exploration.)