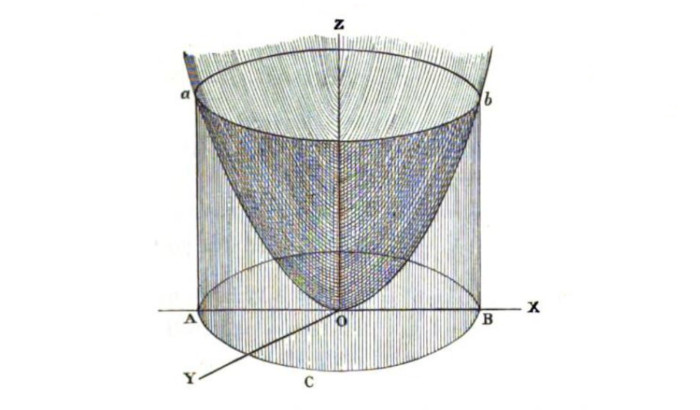 Question for Quote Investigator: Apparently, the pioneering computer scientist Alan Turing once compared scientific knowledge to a differential equation and suggested that religion specified a boundary condition for the equation. I have not seen a precise citation. Would you please explore this topic?

Messages from the Unseen World

III. The Universe is the interior of the Light Cone of the Creation

IV. Science is a Differential Equation. Religion is a Boundary Condition.

The postcard also contained the following line written sideways in the left margin:

? Does the gravitation constant decrease ? 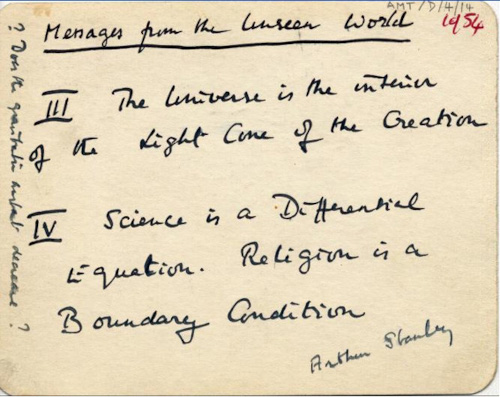 QI conjectures that Turing’s statement was an analogy. A differential equation may have many possible solutions. A boundary condition is an extra constraint that reduces the number of possible solutions and sometimes specifies a unique solution. The postcard statement suggested that there were many possible universes that were compatible with the latest scientific knowledge. Religious beliefs provided additional assumptions that further constrained the set of possible universes.

Image Notes: A public domain mathematical figure from the 1877 book “A Treatise on Some New Geometrical Methods” by James Booth.

Dear Quote Investigator: The physics of quantum mechanics, relativity theory, and string theory are mind-bending. Scientists have made remarkable strides in the twentieth and twenty-first centuries; yet, some believe that the progress will stop before the completion of an all-inclusive physical theory. The following adage suggests that the universe is beyond human comprehension. Here are five versions:

Statements in this family have been credited to English astrophysicist Arthur Eddington, English biologist J. B. S. Haldane, and German theoretical physicist Werner Heisenberg. Would you please explore this topic?

Quote Investigator: The earliest match in this family of expressions known to QI was written by J. B. S. Haldane in an essay titled “Possible Worlds” published within a 1927 collection. Emphasis added to excerpts by QI:[1]1928 (First edition in 1927), Possible Worlds and Other Papers by J. B. S. Haldane, Essay 34: Possible Worlds, Start Page 272, Quote Page 298 and 299, Harper & Brothers Publishers, New York. … Continue reading

Now, my own suspicion is that the universe is not only queerer than we suppose, but queerer than we can suppose. I have read and heard many attempts at a systematic account of it, from materialism and theosophy to the Christian system or that of Kant, and I have always felt that they were much too simple. I suspect that there are more things in heaven and earth than are dreamed of, or can be dreamed of, in any philosophy.

During the ensuing decades the phrasing and vocabulary of the statement have been altered to yield many variants. In addition, the attribution has shifted. Based on current evidence the ascriptions to Arthur Eddington and Werner Heisenberg are unsupported.