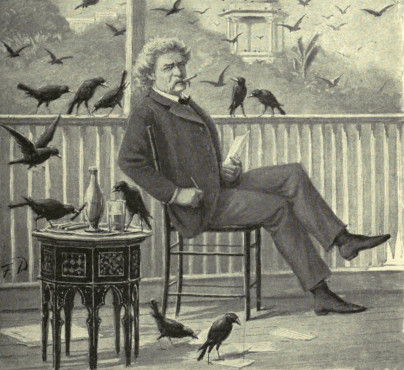 Quote Investigator: Mark Twain penned this amusing remark in a letter dated December 2, 1887 which he sent to “Mrs. Foote”. The letter was reprinted in the “Los Angeles Times” on March 16, 1930.[1] 1930 March 16, Los Angeles Times, Twain Letter Unearthed by Neeta Marquis, Section 3, Quote Page 22, Column 1 and 2, Los Angeles, California. (Newspapers_com) link Also, in 1934 a facsimile of the missive appeared in the book “When Huck Finn Went Highbrow” by Benjamin De Casseres, a limited edition with 125 copies.

There was a long delay between the letter’s composition and its publication, but Twain scholars believe that it is authentic. The famed humorist discussed leading a study group who were exploring the poetry of Robert Browning.[2]1978, Browning Institute Studies, Volume 6, Article: “A Splendor of Stars & Suns”: Twain as a Reader of Browning’s Poems by Alan Gribben, Start Page 87, End Page 107, Published by … Continue reading The quotation reflected Twain’s comical reaction to holding a position of leadership:[3]1934, When Huck Finn Went Highbrow by Benjamin De Casseres, Limited edition with 125 copies, (Book includes facsimile of letter sent from Mark Twain to Mrs. Foote dated December 2, 1887), Quote Page … Continue reading