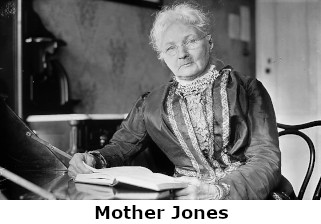 Pray for the dead and fight like hell for the living.

Would you please trace this expression?

Quote Investigator: Mother Jones described in her 1925 autobiography a visit she made to a group of miners. They were holding a union meeting in a church which they had rented, and when Jones arrived, she told them to leave the building: 1

“Boys,” I said, “this is a praying institution. You should not commercialize it. Get up, every one of you and go out in the open fields.”

The union meeting was held outside, but Jones noticed a school nearby, and she told the audience members to consult with the school board and hold future meetings in the school building to which they held a rightful share. Emphasis added to excerpts by QI:

Mother Jones should be credited with this statement which she included in her autobiography.