Dear Quote Investigator: Humorous remarks about Philadelphia are often credited to the well-known actor and comic W. C. Fields. In the past the activities and nightlife in Philadelphia were limited because of strict laws. Hence, time seemed to move slowly, and someone created the following quip:

I spent a week in Philadelphia one day.

Was W. C. Fields responsible for this joke?

Quote Investigator:  The earliest evidence for this jest located by QI appeared in 1908 in a magazine called “Life”. The cartoon containing the joke had an elaborate signature affixed, but QI does not know who drew this comical illustration. Two men in bowler hats discussing the city were depicted [LPCB]:

The quip appeared many times in the following decades but the earliest evidence found by QI of a connection to W. C. Fields did not appear until the 1970s. In 1972 an article in the Washington Post described a social event celebrating the birth date of W. C. Fields [WPWF]

A group of Philadelphia businessmen are throwing a 92d birthday party for the late comedian at a local “Y,” which has a no-liquor rule. They’ll show old Fields films, give guests a chance to kick a stuffed dog and insult a live child—all in an effort to keep alive Philadelphia’s heritage. But ginger ale? It makes it easy to understand what Fields meant when he said that in one night he spent a week in Philadelphia.

Below is a clipping of the cartoon that appeared in Life magazine in 1908 [LPCB]: 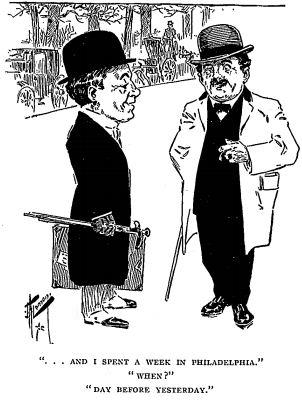 In 1909 the joke was presented in a periodical called “The Outlook”. But the writer disagreed with the sentiment because he visited the city during a transportation strike and found that the metropolis was lively [TSTO]:

It was a New Yorker who once said that he “had spent a week in Philadelphia last Wednesday.” The Spectator does not feel that way about the Quaker City since passing through it when the street car strike was on.

In 1913 a version of the remark was printed in “The Fra”, a periodical published by Elbert Hubbard. The article by Hubbard began with the comment: “Philadelphia figures frequently in the funny columns” and went on to state [EHWP]:

It is considered de rigueur to observe facetiously that you spent a week in Philadelphia on Wednesday last.

In 1917 the jest appeared in the reportage of an event honoring a member of the International Typographical Union. A version was used by a speaker while he addressed the honoree. The quip was applied to a different location, Missouri [TJRS]:

This gentleman was originally from Missouri but instead of having to be shown, he is one of those good fellows who has assisted in showing, I myself, spent a week in Missouri one day and I did not own a beautiful set of cuff buttons like those I now present you.

One reason W. C. Fields is connected to jokes about Philadelphia is because of an article in the June 1925 issue of Vanity Fair magazine. Artists who were prominent in 1925 were asked by the periodical to write their own epitaphs, and W. C. Fields reportedly complied. The quip on this fictional stunt gravestone of Fields differed significantly from the words typically ascribed to the funnyman in modern times [VFWF]:

A number of artists, desiring to be saved from the ordinary run of tombstone literature, have here set down their epitaphs. This second batch of epitaphs, like those published in Vanity Fair in its October issue, certainly have the invaluable “personal touch” …

I WOULD RATHER BE LIVING IN

In 1946 a variant of the quip using the word “fortnight” instead of “week” appeared in the periodical “The Art Digest”  [ADFP]:

Almost everyone has heard of the churlish wag who insisted that he spent a fortnight in Philadelphia one Sunday and who described the city as “a cemetery with lights.”

In 1957 a version of the joke using the nickname “Philly” was printed in the book “Our Philadelphia: A Candid and Colorful Portrait of a Great City” [PSOP]:

Another remark you have heard about Philadelphia is:

“I came to Philly on Sunday but it was closed.”

“Oh sure, I spent a week in Philly one Sunday.”

In April 1971 “The Journal of American Folklore” printed the jest, but it still did not attach the words to W. C. Fields [WPJF]:

There are many other anti-Philadelphia slurs although the comments on its being a “dead” town with little to do or its lack of  late night life are no doubt applied to other cities, for example: “I spent a week in  Philadelphia one day” or “I was in Philadelphia once, but it was closed.”

In August 1971 the Chicago Tribune commented on the “comedians’ gag” and provided an explanation for the choice of Sunday in some versions of the saying [CTWP]:

On most newspapers, the landing of astronauts on the moon is a story for the front pages. Not on Variety; the show business weekly. Do you know what made the front page of Variety this week? A story that says you now can buy a drink on Sunday in Philadelphia. Naturally. That’s because the new ruling kills the old comedians’ gag: “I spent a week in Philadelphia last Sunday.”

In 1972 the joke was credited to W. C. Fields in a story printed in the Washington Post. The details were given near the beginning of this article. In 1975 a version of the remark was attributed to Fields in an AP newswire story printed in The Hartford Courant [HCWF]:

In conclusion, this jape has a long history that began by 1908. The earliest instances were targeted at Philadelphia, but there is no significant support for crediting W. C. Fields as the creator. The first ascription to Fields located by QI was dated many years after his death.

3 thoughts on “I Spent a Week in Philadelphia One Sunday”