Dear Quote Investigator: This is the season for New Year’s resolutions and toasts, and I have found a quotation credited to Benjamin Franklin that fits this theme:

Be at war with your vices, at peace with your neighbors, and let every New Year find you a better man (or woman).

However, there are so many fake quotes attributed to Franklin that I have no idea if this one is authentic. Could you tell me if this one is real? Also, if these are Franklin’s words where did they appear?

Quote Investigator: Franklin published a series of almanacs in the 1700s that were very popular, and many of the proverbs that are credited to him today were printed in these almanacs.  This sentence did appear in the 1755 edition of “Poor Richard’s  Almanac” whose more complete title is: “Poor Richard improved: Being an Almanack and Ephemeris of the Motions of the Sun and Moon; the True Places and Aspects of the Planets; the Rising and Setting of the Sun, And The Rising Setting and Southing of the Moon.”

The words of the expression were interleaved with astronomical facts concerning December 1755, and the salient terms in the phrase were capitalized. The word neighbors was spelled with a “u”, and New Year was hyphenated:[1]1755, Poor Richard improved: Being an Almanack and Ephemeris of the Motions of the Sun and Moon; The True Places and Aspects of the Planets [Poor Richard’s Almanac], Benjamin Franklin, Month: … Continue reading

Be at War with your Vices, at Peace with your Neighbours, and let every New-Year find you a better Man.

Many of the sayings that Franklin presented in his almanacs were obtained from other sources, and QI does not know if this advice originated with Franklin.

Here are additional selected citations in chronological order together with a digital image showing how the saying was  printed within the almanac.

Below is a scan exhibiting the lower part of the page for December 1755 in Poor Richard’s Almanac. The words of the quotation have been emphasized by the addition of red underlining in the far right column.[2]1755, Poor Richard improved: Being an Almanack and Ephemeris of the Motions of the Sun and Moon; The True Places and Aspects of the Planets [Poor Richard’s Almanac], Benjamin Franklin, Month: … Continue reading 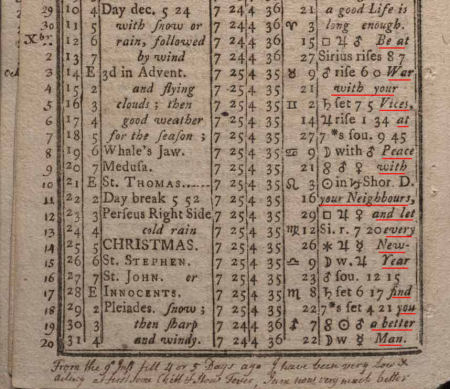 In 1827 a Washington D.C. newspaper called the “National Intelligencer” published a collection of sayings under the title “Ancient and Modern Maxims” with the subtitle “Translated from the Spanish”. The semantics of one of the sayings overlapped with the expression in Franklin’s almanac:[3] 1827 July 28, Daily National Intelligencer, Ancient and Modern Maxims: Translated from the Spanish, Issue 4525, Column 4, Washington, D. C. (Nineteenth Century Newspapers)

Have peace with all men, war with all vices, and concord with thyself. Make thy words agree with thy thoughts, thy actions with thy words, and thy desires with thy actions.

Also in 1827 the passage above was printed in other newspapers such as the North Carolina Sentinel[4] 1827 August 18, North Carolina Sentinel, Translated from the Spanish, Page 2, Column 4, New Bern, North Carolina. (GenealogyBank) and the Daily National Journal[5] 1827 August 25, Daily National Journal, [Freestanding quotation], Column 2, Issue 929, Washington, D. C. (Nineteenth Century Newspapers) of Washington, D.C. The words were not credited to Benjamin Franklin in any of these newspapers.

In 1883 a history book about ancient Rome included a collection of adages attributed to Publilius Syrus who was famous for crafting maxims. One of these adages communicated similar sentiments to those in the saying in Franklin’s almanac. However, the author of the book used a footnote to cast doubt on the ascription to Syrus. Here are three of the adages and the footnote:[6]1883, History of Rome, and of the Roman People: From Its Origin to the Invasion of the Barbarians by Victor Duruy, Translated by M. M. Ripley and W. J. Clarke, Edited by John Pentland Mahaffy, Volume … Continue reading

“Keep thy word, even to an enemy, and have only good thoughts towards him; it is better to receive an injury than to do one.”

“Forgive others often, thyself never; for one must live at peace with men, but at war with one’s own vices.”

“Let us rival each other in gentleness and goodness, for this is the noblest emulation.”

Footnote 1: Interpolations have been made in this collection; some of these sentences do not belong to Syrus. [Many of them are Stoic commonplaces and sayings from Menander. –Ed.]

A long life may not be good enough, but a good life is long enough.

Be at war with your vices, at peace with your neighbors, and let every New Year find you a better man.

Love your enemies, for they tell you your faults.

In conclusion, this saying did appear in the 1755 edition of Poor Richard’s Almanac by Benjamin Franklin. The part of the statement before the conjunction “and” has been printed as a separate maxim. QI does not know if this saying was originally constructed by Franklin.

Update History: On December 31, 2018 the format of the bibliographical notes was changed to numeric.