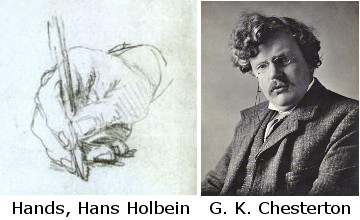 Dear Quote Investigator: I saw the following remark on the webpage of an educator:

The phrase was attributed to Oscar Wilde, but I have not been able to find it in his oeuvre. It was listed on websites like Goodreads and Quotationspage where it was ascribed to Wilde, but I know that websites with massive compilations of quotations are often packed with misinformation. Would you please explore this saying?

Quote Investigator: There is no substantive evidence that Oscar Wilde said or wrote this statement.

In the 1920s the English author, journalist, and critic Gilbert Keith Chesterton penned a column in “The Illustrated London News”. In May 1928 he wrote a passage containing a strongly matching expression. Boldface has been added to excerpts:[1] 1928 May 5, Illustrated London News, Our Note Book by G. K. Chesterton, Quote Page 780, Column 1, London, England. (Gale NewsVault)

The positions of the terms “art” and “morality” have been switched when compared to the modern instance provided by the questioner. The phrase “drawing the line” wittily referred simultaneously to an artist physically drawing a line on a canvas and figuratively creating an artwork on a subject with moral implications.

This was the earliest strong match located by QI, and QI believes that G. K. Chesterton should be credited with the phrase he wrote and not Oscar Wilde.

In June 1920 G. K. Chesterton wrote a precursor to the quotation in his column in “The Illustrated London News”. Chesterton compared and contrasted different political systems, and he argued that despotic systems were unable to recognize or accommodate the autonomy of the individual. The nascent phrase in the following excerpt did not include the word “morality”:[2] 1920 June 5, Illustrated London News, Volume 67, Our Note Book by G. K. Chesterton, Quote Page 952, Column 2, London, England. (Gale NewsVault)

They could imagine no power except a power without limit. They lacked the power of the citizen, because it is like the power of the artist; it consists in drawing the line somewhere. The idea of the nation of kings is that every citizen respects every other citizen, as a king respects another king; not merely as a matter of equality but also of dignity.

In May 1928 G. K. Chesterton published an instance of the saying in “The Illustrated London News” as noted previously. Chesterton’s words were immediately noticed and reprinted by other scribes. For example, on May 29, 1928 a column called “As the World Wags” by Philip Hale in “The Boston Herald” in Massachusetts included the following item. The original phrase “of drawing” was slightly altered to yield “in drawing”:[3] 1928 May 29, Boston Herald, As the World Wags by Philip Hale, Quote Page 8, Column 6, Boston, Massachusetts. (GenealogyBank)

Chesterton is authority for the statement that “art consists in drawing the line somewhere.” Not modern art.

Art, like morality, consists in drawing the line somewhere.

God wants us to be men of principle. G. K. Chesterton said, “Morality, like art, consists in drawing a line somewhere.” We must let God’s Word draw the line, not culture.

In conclusion, QI believes that G. K. Chesterton originated the statement printed in “The Illustrated London News” in 1928. During the decades afterwards, modified instances of the saying have been ascribed to him. In addition, a variant was constructed and incorrectly assigned to Oscar Wilde.

(Special thanks to Andrew Old whose inquiry led QI to formulate this question and perform this exploration. Great thanks to Michael Quinion and Graeme Rymill for accessing the database of “The Illustrated London News” and verifying the quotations within digital images of the periodical. Thanks also to Even Hartmann Flood who located the saying in the collected works of G. K. Chesterton. Thanks to the maintainers of the website of the G. K. Chesterton society. Thanks to Soarpoints for a follow-up comment.)