Dear Quote Investigator: I love spoonerisms, humorous phrases in which the initial sounds or letters of some words are swapped. According to a popular anecdote William A. Spooner who was the Warden of New College, Oxford was late to church services one day and found that a woman was sitting in his customary pew. He addressed her with the following garbled words:

Pardon me, madam, you are occupewing my pie.

Spooner was attempting to say:

Pardon me, madam, you are occupying my pew.

Apparently, a large number of spoonerisms were really constructed by clever students and other humorists. Would you please explore whether this phrase was really spoken by Spooner.

Quote Investigator: Reverend William A. Spooner lived from 1844 to 1930. The earliest evidence of this spoonerism located by QI appeared in an article dated April 9, 1887 titled “Word-Twisting Versus Nonsense” in “The Spectator” of London. Multiple examples of playfully altered expressions were presented. Boldface has been added to excerpts:[1] 1887 April 9, The Spectator, Word-Twisting Versus Nonsense, Start Page: 491, Quote Page 492, Published by John Campbell, Strand, London. (Google Books Full View) link

With the transposition of initial letters, a new field of solecism is opened up, in which a living cleric, in other respects intelligent and accomplished, works with an involuntary assiduity that is most upsetting to his hearers. “My brethren,” so ran one of his most startling announcements, “we all know what it is to have a half-warmed fish [i.e., half-formed wish] in our hearts.”

With him, however, the mischief goes further, extending to the mutual entanglement of words which is terrible to contemplate. He has been known to speak of “Kinquering congs,” and on one occasion, ever memorable to his interlocutor, addressing himself to a gentleman who had intruded upon his seat in church, he politely remarked,—“Pardon me, Sir, but I think you are occupewing my pie.”

In the initial instances of the story, a man was occupying the pew and not a woman. “The Spectator” article did not print William A. Spooner’s name, but the full context left no doubt as to the identity of the “living cleric”. Also, many later articles ascribed the phrases directly to Spooner. Nevertheless, the evidence was weak. QI and most researchers believe that almost all spoonerisms attributed to Spooner were never actually said by him. The phrases were not uttered spontaneously they were deliberately constructed to elicit laughter.

In May 1887 “The New York Times” reprinted a section of the article from “The Spectator” in a column titled “Word Twistings”. The text excerpted above was included in the newspaper.[2] 1887 May 15, New York Times, Word Twistings, Quote Page 6, Column 1, (Acknowledgement to “The Spectator”), New York. (ProQuest) Other periodicals such as “The Library Magazine” based in New York also reprinted the text. [3]1887 April to June, The Library Magazine, Volume 3, Word-Twisting Versus Nonsense, (Acknowledgement to The Spectator), Start Page 193, Quote Page 196, Column 2, Published by John B. Alden. New York. … Continue reading

Even Church Congress members can joke, and a humourous instance of aptrasia, or the misplacement of words, appropriate to the subject, went quietly round the breakfast room, causing laughter as it went- An indignant pew proprietor entering church sees a stranger in his seat; to him he says, in an audible, reproachful whisper, “Sir, are you aware that you are occupewing my pie!”

In June 1890 “The North-Eastern Daily Gazette” of Middlesbrough, England published a different version of the tale. A wealthy woman with large diamond earrings and elaborate clothing owned a pew in one of the most fashionable churches. When she entered church late she noticed that strangers were sitting in her pew:[5] 1890 June 21, The North-Eastern Daily Gazette, Quips and Cranks, Quote Page 4, Column 2, Middlesbrough, England. (19th Century British Library Newspapers: Part II)

Walking down the aisle, with her nose in the air as if pointing to the North Star, she stopped at her pew and, turning haughtily to the usher, who had followed at a respectful distance, enquired in a tone of concentrated but suppressed contempt: “Who are those persons occupewing my pie?” And the minister wondered what made the congregation laugh.

The April 27, 1892 issue of “The Oxford Magazine” printed the word “Spoonerisms”. Currently, this is the first known published appearance of the word “Spoonerism(s)” although the linguistic entity was already being discussed before the eponym was published. Top-flight researcher Stephen Goranson located this citation:[6]1892 April 27, The Oxford Magazine: A Weekly Newspaper and Review, Volume 10, Number 17, Notes and News, Start Page 302, Quote Page 303, Quote Page 303, Published for The Proprietors by Horace Hart, … Continue reading

Then there is that fascinating form of fooling which consists in inverting the terminations or beginnings of words. Although this is a topic which Aristotle might be supposed to have exhausted in his treatise on the Apparently Humorous, modern imitators have displayed fertility and dulness in the fabrication of examples: they will not remember that life is hard enough without “Spoonerisms.”

ESSENCE OF PARLIAMENT
EXTRACTED FROM THE DIARY OF TORY, M.P.

House of Commons, Monday, July 11.—“So you are occupewing Tommy Bowles’s pie,” said Sark to Mr. Gedge, finding him once more ensconced in the coveted corner seat above the Gangway.

The character Mr. Gedge was confused by the expression. The magazine stated that the line was based on “an old story; everybody knows it, every one but Mr. Gedge”. The illustration had the following caption: An Occupewer of other People’s Pies! Mr. Sydney G-dge. 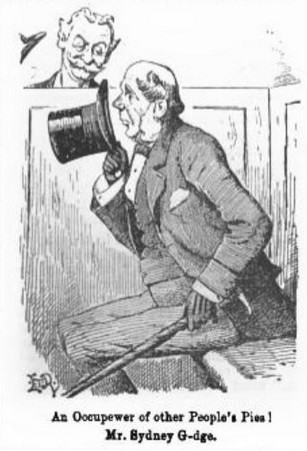 In 1911 “The Strand Magazine” of London printed an extended version of the anecdote in which Reverend Spooner told a woman that an assistant would show her to another seat:[8] 1911 December, The Strand Magazine, Volume 42, Spooneriana by A. T. Corke, Start Page 770, Quote Page 771, Column 1, Published by George Newnes, Strand, London. (HathiTrust)

To a lady whom he found in possession of his stall in the college chapel he gently observed: “Excuse me, madam, you are occupewing my pie; but if you will wait a moment the verger will sew you into a sheet.”

Someone is occupewing my pie. Please sew me to another sheet.

The unscrambled statement was the following:

Someone is occupying my pew. Please show me to another seat.

In conclusion, this entertaining spoonerism was attributed to Reverend William A. Spooner by 1887. However, many Spoonerisms have been concocted and assigned to Spooner over the years, and the linkages have almost always been spurious.

Image Notes: Illustration by G. Morrow of a spoonerism from “The Strand Magazine” in December 1911. Caricature of William A. Spooner published in Vanity Fair in 1898; accessed via Wikimedia Commons.

(Special thanks to the discussants on the ADS mailing list including Fred Shapiro, Stephen Goranson, and Wilson Gray.)