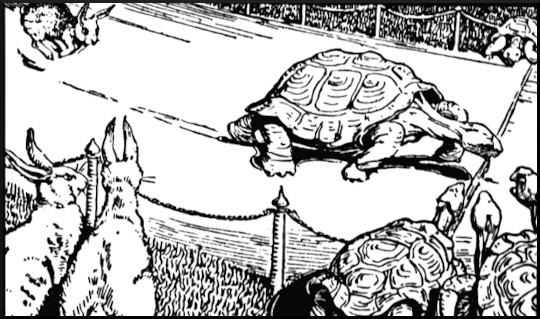 Dear Quote Investigator: A famous verse in the Bible instructs readers that the advantages enjoyed by an individual do not guarantee his or her success:[1]Website: Bible Hub, Bible Translation: King James Bible, Section: Ecclesiastes, Chapter 9, Verse 11, Website Description: “Bible hub is a production of the Online Parallel Bible Project.” … Continue reading

I returned, and saw under the sun, that the race is not to the swift, nor the battle to the strong, neither yet bread to the wise, nor yet riches to men of understanding, nor yet favour to men of skill; but time and chance happeneth to them all.

A humorous reaction to this proverbial wisdom has become popular. Here are two versions:

These words have been attributed to Damon Runyon, a newspaperman whose short stories inspired the Broadway musical “Guys and Dolls” and to Franklin P. Adams, an influential columnist who composed “The Conning Tower”. Would you please explore this topic?

As Hugh Keough used to say: “The race is not always to the swift, nor the battle to the strong; but that is the way to bet.”

Damon Runyon also employed the saying, but he credited Keough. In addition, other well-known columnists such as drama critic Burns Mantle and sportswriter Grantland Rice ascribed a similar joke to Keough.

Yet, the situation was complicated because the jest has been evolving for more than one hundred and eighty years, and multiple versions have achieved wide distribution during this long period. A precursor that presented betting odds appeared in 1833 in “Blackwood’s Edinburgh Magazine”:[3]1833 October, Blackwood’s Edinburgh Magazine, Volume 34, Morning Monologues By an Early Riser, No. 1, Start Page 429, Quote Page 432, Published by William Blackwood, Edinburgh, Scotland. … Continue reading

Now we say that the race is—if not always—ninety-nine times in a hundred—to the swift, and the battle to the strong.

In July 1861 “The New York Ledger” printed a collection of sayings under the title “Wit and Wisdom”. The following instance used the phrase “ninety-nine times in a hundred”, and the quip structure was parallel to the modern version:[4] 1861 July 20, New York Ledger, Wit and Wisdom: Original and Selected, Prepared expressly for the Ledger by Geo. D. Prentice, Quote Page 3, Column 5, New York, New York. (GenealogyBank)

To be sure the race is not always to the swift, nor the battle to the strong; but it is ninety-nine times in a hundred.

The newspaper article was prepared by George D. Prentice, and it was described as a mixture of original and reprinted material. On the same day, a matching saying was printed in “The Springfield Daily Republican” of Springfield, Massachusetts.[5] 1861 July 20, Springfield Daily Republican, Selected Miscellany: Sense and Sentiment, Quote Page 6, Column 5, Springfield, Massachusetts. (GenealogyBank) The article was titled “Selected Miscellany”, and no author was listed. Perhaps Prentice reformulated a statement he had previously read or heard.

Special thanks to top researcher Barry Popik for his invaluable efforts on this topic that were recorded on his web page here.

The race is not always to the swift nor the battle to the strong, but it is not often that the turtle beats the hare.

It sounds a little hard and cynical, but it is none the less true—the one who wins in this life for the most part is the one who deserves to win. Correspondingly, the one who loses deserves to lose, for though the race is not always to the swift, nor the battle always to the strong, in ninety-nine cases out of a hundred it is so, and the palm is given to the most deserving.

In 1899 the successful Wanamaker’s department store in New York ran an advertisement with an instance that referred to “expert opinions”:[9] 1899 May 9, New York Tribune, (Advertisement for shoes available at The Wanamaker Store of John Wanamaker), Quote Page 6, Column 5, New York. (GenealogyBank)

The shoe store here is a marked example of the good that comes out of bigness. The race may not always be to the swift,—all the expert opinions generally lean that way—but there is no question that in mercantile affairs the best is to the biggest.

I merely say that the most able generally get to the top, and that success, other things being equal, is the surest proof of ability. Though the race may not always be to the swift nor the battle to the strong, the odds are vastly in their favour.

In 1905 a comical version printed in a collection called “Wit and Humor of Well-Known Quotations” asserted that the organizers of betting pools were the actual winners; the entry included an acknowledgement to a Boston newspaper:[11] 1905 (1904 Copyright), Wit and Humor of Well-Known Quotations, Edited by Marshall Brown, Quote Page 279, Published by Small, Maynard & Company, Boston, Massachusetts. (Google Books Full View) link

The race is not to the swift, but to the pool-seller.
—Boston Transcript

The race may not always be to the swift, but the times when it is not are few and far between, and in these days of keen competition he who keeps himself in closest touch with those whose work he is after is the one most likely to get it.

The Race Is Not Always with the Swift, But That’s Where to Look

The center column of the page featured an article with the byline H. E. K. which was the initialism used by Hugh E. Keough. Because the banner was not attached to a specific article there was some ambiguity. Nevertheless, QI believes that Keough who was a senior sports writer at the “The Chicago Daily Tribune” in 1912 should be credited with the saying containing the phrase “where to look”. Indeed, Franklin P. Adams and Damon Runyon both credited Keough with this version of the saying in 1916 and 1939, respectively.

Curiously, in 1919 Adams also ascribed to Keough a version that used the phrase “that is the way to bet”, In addition, in 1945 Runyon credited Keough with an instance using “betting is best that way”. Detailed citations are given further below.

Sadly, Keough died in June 1912 at the young age of 48. By December 1912 a friend named Hugh S. Fullerton had assembled a short volume titled “By HEK” that reprinted selected material from Keough. The work displayed a pithy quotation from the scribe at the top of each page. The twelfth page listed:[14]1912, “By Hek”: In the Wake of the News: A Collection of the Writings of the Late Hugh Edmund Keough, Compiled and edited by Hugh S. Fullerton, Published in Chicago, Illinois. (WorldCat … Continue reading

The race is not always to the swift, but that is where to look.

In 1915 “The Atlanta Constitution” printed an article without a byline that ended with the following line:[15] 1915 May 16, Atlanta Constitution, St. Louis Writer Pans Griff, For Long’s Banishment to The Siberia of Baseball, Quote Page 5B, Column 3, Atlanta, Georgia. (NewspaperArchive)

The race is not always to the swift, but that is where to look.

As Hughey Keough used to say, “The race is not always to the swift nor the battle to the strong, but that is where to look.”

“The race may not always be to the swift nor the battle to the strong—but that’s where to look.”—[Luke McLuke

As Hugh Keough used to say: “The race is not always to the swift, nor the battle to the strong; but that is the way to bet.”

Hek answered this old maxim by remarking, ‘The race may not be to the swift—but that is where to look”

In October 1919 the “where to look” expression appeared in “The Plumbers Trade Journal” as a caption in an illustrated advertisement for Wiseco Products of Watertown, New York. No attribution was provided:[20]1919 October 1, The Plumbers Trade Journal: Steam and Hot Water Fitters Review, (Caption of illustration in advertisement for Wiseco Products by J. B. Wise, Inc., Watertown, New York), Quote Page … Continue reading

“The race is not always to the swift” but that’s the way to bet.

In 1921 the journalist and novelist Christopher Morley released a collection of his writings in which he incorrectly assigned the saying to Franklin P. Adams:[21]1921, Plum Pudding, of Divers Ingredients, Discreetly Blended & Seasoned by Christopher Morley, Dempsey vs Carpentier, Start Page 234, Quote Page 234, Published by Doubleday, Page & Company, … Continue reading

The race is not to the swift, nor the battle to the strong; but as Frank Adams once remarked, the betting is best that way.

“The race is not always to the swift,” Hughie Keogh used to say, “but that’s the way to bet.”

In 1939 Damon Runyon dedicated one of his syndicated columns to extolling the quality of the writings of Hugh E. Keough. Runyon referred to a small well-thumbed book he owned that had been created for close friends and admirers of Keough. QI believes Runyon was referring to the 1912 “By HEK” mentioned previously. Runyon shared a set of adages from the volume that included these:[23] 1939 July 8, The Milwaukee Sentinel, The Brighter Side by Damon Runyon, Quote Page 6, Column 7, Milwaukee, Wisconsin. (Google News Archive)

“The race is not always to the swift, but that is where to look.”
“Rubes can imagine more crooked things than crooks can invent.”
“A simple liar is he who says he can bet one way and root another.”

It may be that the race is not always to the swift, nor the battle to the strong—but that’s the way to bet. —Damon Runyon

In 1945 Runyon wrote about a version of the saying again in his column. He noted that there was some confusion about the attribution, and he credited Keough with an instance containing the phrase “betting is best that way”:[25] 1945 July 26, Idaho Daily Statesman, The Brighter Side by Damon Runyon, Quote Page 4, Column 4, Boise, Idaho. (GenealogyBank)

Nor do I doubt that Franklin P. Adams said, as reported in Bartlett’s Familiar Quotations, “the race is not to the swift, nor the battle to the strong; but the betting is best that way,” only I think Hughy Keough said it first.

I agree that it is no great thought, no sparkling gem of wisdom anyway you take it, but when Bartlett’s prints something, I want it accurate because Bartlett’s is one of my favorite sources of thievery and I like to know who I am stealing from.

In conclusion, expressions of this sentiment have been circulating and evolving for more than one hundred and eighty years. Two citations in 1912 support the attribution of “The race is not always to the swift, but that is where to look” to Hugh E. Keough.

In 1919 Franklin P. Adams also supported the attribution of the following to Keough: “The race is not always to the swift, nor the battle to the strong; but that is the way to bet.” Adams, Damon Runyon, Grantland Rice, and Burns Mantle all employed versions of this quip and aided its popularization; however, every one of them credited Keough.

Image Notes: Public domain illustration of a race between a hare and a tortoise image from “The Book of Knowledge”, “The Children’s Encyclopedia” in 1912.

(Great thanks to Brian Zack whose inquiry led QI to formulate this question and perform this exploration. Great thanks to Barry Popik for his important research on this topic. Thanks also to Nigel Rees who included a valuable 1864 citation in the July 2014 issue of “The Quote Unquote Newsletter” issue. In addition, thanks to Jonathan Lighter who broached this topic on the ADS mailing list.)