Dear Quote Investigator: On Facebook I saw a potent statement about purpose and individuality:

These words were superimposed on a beautiful picture, but no ascription was provided. You have examined many quotations with incorrect attributions. There is a comparable problem that is endemic online. Sometimes quotations and images are appropriated without credit; original attributions are erased or cropped out, and new web addresses and logos are added. Would you please trace this saying?

Quote Investigator: The statement above was crafted by the computer graphic artist, photographer, and writer Zero Dean in June 2013. He wrote a post on this topic and created a set of vivid images which have been widely shared on social networks such as Facebook, Pinterest, Instagram, Tumblr, and Twitter. However, sometimes Dean’s name has been effaced or replaced by other identifiers.

In 2007 Zero Dean was a senior artist at a computer gaming company. He created artwork for games such as Rise of Nations and Red Dead Redemption. In 2009 he left his job and started on an epic road trip adventure. He has shared his experiences via his writings, photography, and art.

The quotation was written on June 26, 2013 and shared via a blog post and a pinned image on Pinterest. Interestingly, there were two different versions in the beginning. This was the longer version:[1]Personal Communication via Facebook Private Message between Garson O’Toole and Zero Dean, Query from O’Toole sent September 29, 2011, Reply from Zero Dean received September 29, 2011, The … Continue reading[2]Website: Blog Zero Dean, Article title: Not everyone will understand your journey, Author: Zero Dean, Date on website: June 27, 2013, Snapshot on August 5, 2013 from Internet Archive Wayback Machine, … Continue reading

Not everyone will understand your journey. And that’s fine. You have to realize that it’s not their journey to make sense of. It’s yours.

Quotations often are simplified, and in this case Dean himself immediately streamlined the saying to yield:

The images Zero Dean created were based on the simpler statement. Here are two examples: 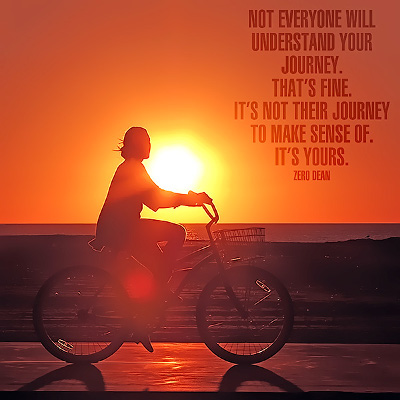 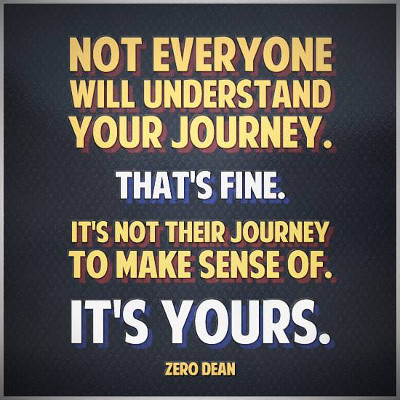 The only person that is truly aware of your emotions, your intentions, or your interpretation of experiences (which is all they can be), is you.

As much as others may — at most times — identify with you or your actions, it is impossible to go through life without occasionally being misunderstood. While you can control what you say or how you act, you cannot always control how others choose to interpret it.

Precursors to the statement do exist. For example, in 2000 “Cincinnati Magazine” published an article about health that included a statement from a doctor named Nancy Snyderman. The words were thematically close to part of the saying under investigation. Bold face has been added to excerpts:[3]2000 August, Cincinnati Magazine, Section: Health Special Advertising Section, Healthy Journeys: A Conversation on Women’s Health: Featuring Nancy Snyderman M.D. (ABC News Medical … Continue reading

“We have a big plate in life and we can scoop as much stuff on it as we want, but we also need to push some off,” she continues. “We have the control and power. It’s your journey, not someone else’s.”

In 2010 Deidre S. Powell sent out a tweet that was thematically similar, but Powell’s remark emphasized the word “destination” which was not used in Dean’s remark:[4]Tweet, From: Deidre S. Powell @deidrespowell, Date: Inexact: “5 years ago” in August 2015, Text: Not everyone will understand your journey. But don’t be bothered by others when you … Continue reading

Not everyone will understand your journey. But don’t be bothered by others when you know your destination! http://bit.ly/adc5K5.

In July 2011 PushyDreamers tweeted a message that provided a substantive semantic match, but the phrasing was distinct, and the word choice produced a different tone:[5]Tweet, From: PushyDreamers★ @PushyDreamers, Time: 6:38 PM, Date: July 23 2011, Text: Not everyone will understand your journey. Doesn’t matter, they aren’t suppose to, only you are. … Continue reading

Not everyone will understand your journey. Doesn’t matter, they aren’t suppose to, only you are. -PushyDreamers

In January 2012 Aisha tweeted a comment that complimented individuals who were able to understand or sympathize with the journeys of others:[6]Tweet, From: Aisha (I-e-ShA) ‏@LyfeNHeelz, Time: 6:28 PM, Date: January 3 2012, Text: Not everyone will understand YOUR journey, YOUR path, why u do what u do….its not meant for … Continue reading

Not everyone will understand YOUR journey, YOUR path, why u do what u do….its not meant for “them” too. But those that do, keep close…

On June 26, 2013 Zero Dean shared the quotation via a blog post and a pin on Pinterest. The quotation was seen by a twitter user named Jaison Keyette who tweeted it to his followers:[7]Tweet, From: Jaison Keyette @RealJai_Keys, Time: 11:48 PM, Date: June 26, 2013, Text: Not everyone will understand your journey. That’s fine. It’s not their journey to make sense of. … Continue reading[8]Instagram, Account: keys2hearts (Jaison Keyette), Date: Undated (Snapshot taken August 17, 2015), Comment response to question about source of quotation in Tweet: “I believe I saw it on … Continue reading

In conclusion, QI believes that this statement should be credited to Zero Dean. It has appeared on various webpages and Facebook feeds without attribution. In some cases, the attribution has been removed.

Image Notes: Highway image, portrait of Zero Dean, and two quotation graphics from Zero Dean. These images have been used with the permission of Zero Dean who controls the rights.

(Great thanks to Zero Dean whose inquiry led QI to formulate this question and perform this exploration.)