Dear Quote Investigator: A comical remark about funeral attendance has been attributed to the baseball great Yogi Berra:

Always go to other people’s funerals; otherwise they won’t go to yours.

A simple interpretation seems to require ghosts to attend a future funeral. Would you please trace this joke? Is it a genuine Yogiism?

Quote Investigator: In 1987 William Safire who was the language columnist of “The New York Times” asked Yogi Berra about this statement, and Berra denied that he ever made it.[1] 1987 February 15, New York Times, Mr. Bonaprop by William Safire, Start Page SM8, Quote Page SM10, Column 2, New York. (ProQuest) Indeed, the jest was circulating before Berra was born.

Old John Nobbs was one of those present. Going to funerals was quite a mania of his, and he attended every funeral he could for twelve miles round Ledbury.

“Confound it!” John would say, “if I don’t attend other people’s funerals they won’t come to mine.”

Thanks to magnificent researcher Stephen Goranson who located the above citation.

“Ess, o’ course. I haven’ missed a berrin’ in this town for twenty year—summer or winter, cauld or het, dry or wet—and there edn’ many can say the same. ‘Do unto others as you would that they sh’d do to you,’—that’s my motty; and I turn et this way, ‘Go to other people’s berrin’s that they may come to yours.'”

“Eh—’twould be a wisht berrin’ that!” chuckled Mrs. Tonkin.

The text above appeared in a story titled “Mrs. Tonkin at Home” by Charles Lee, and in April 1895 the work was reprinted in the journal “Littell’s Living Age” based in Boston, Masschusetts.[4]1895 April 27, Littell’s Living Age (The Living Age), Volume 205, Mrs. Tonkin at Home by Charles Lee (Reprinted from Leisure Hour), Start Page 204, Quote Page 213, Column 2, Published by … Continue reading Hence, the jest was disseminated in England and the United States.

In 1898 “The Cornish Magazine” printed a set of reminiscences from inhabitants of Cornwall, England. The speaker delivered the line about burials without intentional humor. The term “pixy” referred to small sprite-like creatures of popular folklore in Cornwall:[5]1898 July to December, The Cornish Magazine, Volume 1, Edited by Arthur Thomas Quiller-Couch Recollections of a Parish Worker by M., Start Page 467, Quote Page 468, Published by Truro: Joseph … Continue reading

In 1907 a newspaper in New Orleans, Louisiana printed an instance as a filler item. The name “Flannigan” and the nonstandard spelling suggested that the speaker was Irish. The phrase “Of course I am” was rendered as “Ave coorse Oi am”:[6] 1907 October 03, New Orleans Item,(Filler item) Av Coorse, Quote Page 13, Column 3, (GNA Page 24), New Orleans, Louisiana. (GenealogyBank)

The valuable citation immediately above and others were identified by top researcher Barry Popik, and his discussion of this topic is available here.

In 1911 the influential London humor magazine “Punch” printed a one panel cartoon with a caption that included an instance of the joke:[7] 1911 January 25, Punch, Or the London Charivari, (Caption of One Panel Cartoon), Quote Page 69, Punch Publications Ltd., London. (HathiTrust Full View) link link 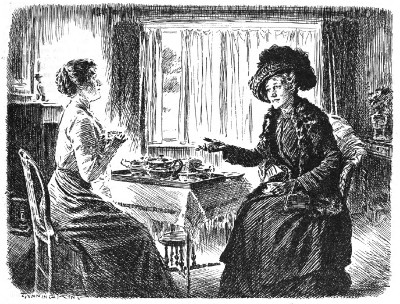 Visitor. “I’VE JUST COME FROM THE DOCTOR’S FUNERAL, BUT I DIDN’T SEE ANY OF YOU THERE.”
Hostess. “NO—MY HUSBAND DIDN’T CARE TO GO, AS FUNERALS ALWAYS UPSET HIM.”
Visitor. “OH, WELL, IF YOU NEVER GO TO OTHER PEOPLE’S FUNERALS I DON’T SEE HOW YOU CAN EXPECT THEM TO COME TO YOURS.”

The “Punch” item was reprinted in multiple periodicals. For example, “The Boston Sunday Globe” in Massachusetts published a version with a simpler illustration, and the “Oakland Tribune” in California published an instance with no illustration.[8] 1911 April 9, Boston Daily Globe, Page Title: Laugh and the World Laughs With You, (Caption of One Panel Cartoon), Quote Page SM2, Column 1, Boston, Massachusetts. (ProQuest)[9] 1911 February 16, Oakland Tribune, A Bit of Humor, Quote Page 6, Column 3, Oakland, California. (NewspaperArchive)

He told General Anderson, he didn’t see why they kept going to them. General Anderson frowned and said they had to. “If you don’t go to other men’s funerals,” he told Father stiffly, “they won’t go to yours.” But Father said he didn’t intend to die at all if he could help it, so they couldn’t go to his anyway.

He never went out, even to funerals. This, said his friends, explained Hinky Dink’s own unsuccessful funeral. “If you don’t go to other people’s funerals,” the boys observed, “they won’t go to yours.”

In 1965 “The Washington Post” printed a letter that referred to Clarence Day’s book but employed a different phrasing for the remark:[12] 1965 May 13, The Washington Post, Mary Haworth’s Mail: This Friend Should Be Dumped (Letter from C. L. to Mary Haworth), Quote Page K8, Column 3 and 4, Washington, D.C. (ProQuest)

I also think of Clarence Day (in “Life With Father”) who said: “You have to go to other people’s funerals if you expect them to go to yours.” Sincerely, C. L.

He visited the sick, congratulated the newly married, welcomed each new baby and comforted the bereaved. The latter was especially important and some aldermen never missed a funeral—for as 19th ward boss Johnny Powers observed, “if you don’t go to other people’s funerals, they won’t go to yours.”

What about the recent “It’s déjà vu all over again,” so often attributed to Mr. Berra? “Nope, not true, I never said that.” Or the advice, “Always go to other people’s funerals — otherwise, they won’t come to yours”? That too is disclaimed; not an authentic bonaprop by Berra.

I didn’t say, “It’s déjà vu all over again,” and I didn’t say, “always go to other people’s funerals; otherwise, they won’t go to yours.” But I did get a phone call from William Safire, the New York Times columnist, asking if I had. He didn’t seem disappointed when I told him no. That made me like him even though we had never met.

In conclusion, the earliest citation for the jest known to QI appeared in an 1876 novel by J. F. Shaw Kennedy. However, this remark has been difficult to trace because it can be expressed in many ways. For example, the 1895 version employed the term “berrin'” instead of “funeral”. Hence, the ascription to Kennedy must be considered tentative.

In addition, an 1898 citation suggested that the remark was not a fictional construct, but was spoken by a Cornishwoman without humorous intent. The popular periodical “Punch” printed a cartoon with the jest in 1911. The writer Clarence Day included the joke in a story that was published in “The New Yorker” in 1935, but it was already in circulation. The linkage to Yogi Berra was spurious.

Update History: On September 28, 2015 the 1876 citation was added, and the conclusion was rewritten.

(Great thanks to the brilliant baseball player Yogi Berra who passed away on September 22, 2015. Berra’s athletic legacy was remarkable. In addition, a fascinating and fun linguistic legacy has accumulated in his name. It is a complex combination of the genuine and apocryphal. Special thanks to Barry Popik who pushed the date of this jest back to 1907 which inspired QI to reactivate this research topic and push the date back to 1895. Further thanks to Stephen Goranson who pushed the date back to 1876. In Memoriam: For my brother Stephen who enjoyed real and fake Yogi quotes.)