Dear Quote Investigator: There is a fascinating quotation about self-consciousness and the desire to establish a connection with an alter ego or doppelganger. Here is the beginning:

I used to think I was the strangest person in the world, but then I thought, there are so many people in the world, there must be someone just like me who feels bizarre and flawed in the same ways I do.

These words have been attributed to the famous Mexican painter Frida Kahlo, but I have not been able to find a good citation. Would you please explore this topic?

Quote Investigator: Frida Kahlo died in 1954, and QI has not yet found any substantive evidence that she wrote or said this quotation in Spanish or English.

The earliest appearance of this quotation known to QI occurred on the “PostSecret” website in March 2008. The quotation was printed on a postcard which had been mailed to a post-office box maintained by Frank Warren, the founder of “PostSecret”. Warren has described his website as a community art project. He has encouraged individuals to write personal secrets on homemade postcards and anonymously mail them to him; a subset are selected and displayed on the website.

Below is the postcard that was displayed next to the date March 16, 2008. The quotation was anonymous; specifically, it was not ascribed to Frida Kahlo; however, the background image showed part of a portrait of the prominent artist. QI conjectures that this image induced the misattribution to Kahlo: 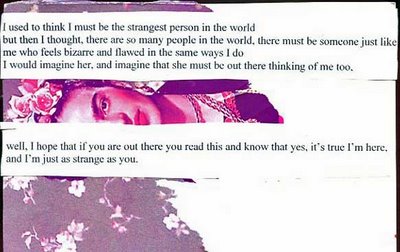 I used to think I was the strangest person in the world
but then I thought, there are so many people in the world, there must be someone just like me who feels bizarre and flawed in the same ways I do
I would imagine her, and imagine that she must be out there thinking of me too.
well, I hope that if you are out there you read this and know that yes, it’s true I’m here,
and I’m just as strange as you.

The protean electronic nature of websites often makes it difficult to verify the dates of text and images from past years. In this case, fortunately, a snapshot of the “PostSecret” website was taken on March 18, 2008 and stored in the “Internet Archive: Way Back Machine” database.[1]Internet Archive: Way Back Machine, Web snapshot date: March 18, 2008, Date on Webpage: March 16, 2008, Archive download URL: postsecret.blogspot.com, Title: Sunday Secrets. (Accessed at … Continue reading

Because the quotation appeared initially without an ascription it has been difficult to ascertain its provenance with much certainty. Nevertheless, QI believes that the top candidate for authorship is Becky Martin (Rebecca Katherine Martin).

In 2011 an instance was shared on the website goodreads which is a very popular hub for the dissemination of quotations and misquotations. At the time this article was written the quotation had attracted 1936 “likes”; the passage was attributed to Kahlo:[2]Website: Goodreads, Article title: Frida Kahlo > Quotes > Quotable Quote, Timestamp on first ‘Like’: Jun 30, 2011 02:39AM, Website description: Goodreads is a large community for readers … Continue reading

“I used to think I was the strangest person in the world but then I thought there are so many people in the world, there must be someone just like me who feels bizarre and flawed in the same ways I do. I would imagine her, and imagine that she must be out there thinking of me too. Well, I hope that if you are out there and read this and know that, yes, it’s true I’m here, and I’m just as strange as you.”
― Frida Kahlo

In June 2015 the bestselling cartoonist Gavin Aung Than published on his website “Zen Pencils” a comic strip titled “Strange Like Me” that contained an instance of the quotation. The tale illustrated in the panels of the strip cleverly and creatively captured the emotional resonance of the words which were attributed to Kahlo.[3]Website: Zen Pencils – Cartoon Quotes from Inspirational Folks, Comic strip title: Strange Like Me – Frida Kahlo, Comic strip number: 177, Date on website: June 4, 2015, Website … Continue reading

In July 2015 a Canadian artist named Catherine Meyers posted an article on her blog that included the passage attributed to Kahlo. Appended to the bottom of the article was a message ascribed to Rebecca Katherine Martin who asserted that she was the creator of the quotation and not Kahlo; she had composed the heartfelt text when she was a young woman:[4]Website: Catherine Meyers Artist, Article title: Happy Birthday Frida Kahlo, Date on website: July 6, 2015, Website description: “Welcome to my art blog that I began in 2008, as an exploration … Continue reading

I pasted these lines of text onto a ripped magazine clipping of Kahlo, and mailed the postcard to PostSecret (http://postsecret.com/). My little image was at the top of the blog one Sunday, and the girl that I was felt a glow of solidarity. Not so alone. The comments were so kind, I think I still have them saved to my computer.

In December 2015 Gavin Aung Than published a follow-up article about his cartoon. He stated that he had been contacted via email by a person who asserted that she had authored the quotation and not Kahlo. Now, he was appealing to his readers for help in resolving the question of authorship.[5]Website: Zen Pencils – Cartoon Quotes from Inspirational Folks, Blog entry title: Help needed – FRIDA KAHLO quote under question, Blog entry author: Gavin Aung Than, Date on website: … Continue reading

QI has communicated via email with Gavin Aung Than and with Becky Martin, the individual who is claiming authorship of the quotation.[7] Personal Communication via email between Garson O’Toole and Gavin Aung Than, Time period: December 2015.[8]Personal Communication via email between Garson O’Toole and Becky Martin, Time period: December 2015 and January 2016. (QI has not independently verified the identity of Becky Martin. The name is … Continue reading QI believes that Martin’s assertion that she constructed the postcard and sent it to “PostSecret” is credible. Admittedly, this is a difficult assertion to verify because the material sent to “PostSecret” is supposed to be anonymous.

Spanish instances of the quotation have also been circulating. For example, in 2012 the website of the Spanish newspaper ABC published an article with ten quotations attributed to Frida Kahlo. The tenth corresponded to the quotation under examination. QI conjectures that the passage below was derived from the English text and not vice versa:[9]Website: ABC.es, Article title: Diez frases para recordar a Frida Kahlo, Article author: Estefanía Magro (Madrid), Timestamp on website: (July 6, 2012) 06/07/2012 – 11.48h, Website … Continue reading

In conclusion, based on current evidence QI believes it is unlikely that the quotation was created by Frida Kahlo who died in 1954. Instead, it was first published on the “PostSecret” website in March 2008. “PostSecret” is an ongoing art project designed to share anonymous messages; hence, no ascription was given. Rebecca Katherine Martin has stepped forward and claimed authorship, and QI finds her assertion credible. More information may emerge in the future to help clarify this topic.

(Great thanks to Jason Yip and Gavin Aung Than whose inquiries led QI to formulate this question and perform this exploration. Special thanks to Becky Martin for her helpful responses to questions on this topic.)