The phrases of the expression were interleaved with astronomical facts concerning the month of May 1738. QI has underlined the adage in red in the image below which shows part of Franklin’s book:[1]1738, Poor Richard, An Almanack For the Year of Christ 1738, Being the Second after Leap Year (Poor Richard’s Almanac), Benjamin Franklin, Month: May, Column: 2, Philadelphia, Pennsylvania. (Images … Continue reading 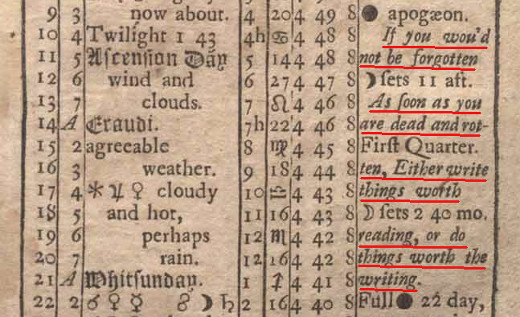 In 1855 a reference work titled “Cyclopaedia of American Literature” included a section about Franklin that reprinted a sampling of the sayings from his almanacs; here were three. The spelling of the word “wou’d” was changed to “would”; also, the anomalous spelling of “visiters” below was present in the 1855 text:[3]1855, Title: Cyclopaedia of American Literature: Embracing Personal and Critical Notices of Authors, and Selections from Their Writings, From the Earliest Period to the Present Day, Authors: Evert A. … Continue reading

“If you would not be forgotten as soon as you are dead and rotten, either write things worth reading, or do things worth the writing.”

If you would keep your secret from an enemy, tell it not to a friend.

If you would not be forgotten as soon as you are dead and rotten, either write things worth reading, or do things worth writing.

If you would reap praise you must sow the seeds, gentle words and useful deeds.

Franklin’s statement was discussed in the second volume of the well-regarded biography “The Life of Benjamin Franklin” by J. A. Leo Lemay. The author pointed to the earlier adage in “Introductio ad Prudentiam”, and he suggested that Franklin modified and combined two existing expressions to produce his version:[5] The Life of Benjamin Franklin, Volume 2: Printer and Publisher, 1730-1747 by J. A. Leo Lemay, Quote Page 211, University of Pennsylvania Press, Philadelphia, Pennsylvania. (Google Books Preview) link

As he revised it, he thought of a common lugubrious verse on samplers, which in one version said, “When I am dead and all my bones are rotten / If this you see Remember me and never let me be forgotten.” He put together and revised the learned saying and the folk rhyme. The combination of a folk and a scholarly saying seems typical of Franklin’s egalitarianism. . .

In conclusion, Benjamin Franklin did construct a saying of the type described by the questioner and placed it in his 1738 almanac; however, he apparently built it using two sayings he had encountered previously. Thus, the lineage was mixed. Thomas Fuller can be credited with the simpler statement in his 1727 compilation although he may have been recording an adage that was already in circulation.

(Great thanks to Maseena Ziegler whose inquiry led QI to formulate this question and perform this exploration.)