Dear Quote Investigator: A popular technique in rhetoric consists of repeating a clause while permuting the words. For example:

Apparently, statesman Benjamin Franklin contended that a belief in the first clause led individuals to follow the guidance of the second. Would you please explore this topic?

Quote Investigator: Benjamin Franklin did include a matching statement in one of his famous almanacs, but the saying was already in circulation.

The earliest evidence known to QI appeared in a 1750 volume by the English nobleman George Savile, 1st Marquis of Halifax. The book included a section called “Political, Moral, and Miscellaneous Thoughts and Reflections” that contained items such as the following. The word “everything” was written as two words. Emphasis added to excerpts by QI:[1]1750, A Character of King Charles the Second: And Political, Moral, and Miscellaneous Thoughts and Reflections by the George Savile, Marquis of Halifax, Section: Of Money, Start Page 145, Quote Page … Continue reading

If Men considered how many Things there are that Riches cannot buy, they would not be so fond of them.

Savile had died in 1695 many years before publication. A note at the beginning of the manuscript stated that the original document had been held by Savile’s grand-daughter Dorothy, Countess of Burlington.

In May 1750 Savile’s book was examined in “The Monthly Review” and the saying under analysis was reprinted.[2]1750 May, The Monthly Review or New Literary Journal by Several Hands, Volume 3, Article 7, (Review of “A Character of K. Charles II” by George Saville, Marquis of Hallifax), Start Page … Continue reading Thus, it achieved further circulation.

He that is of Opinion Money will do every Thing, may well be suspected of doing every Thing for Money.

Here is an image showing the quotation underlined in red on the 1753 almanac page. 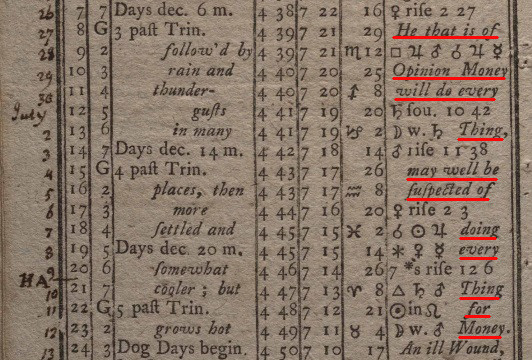 Researchers have found multiple instances of Franklin placing adages into his almanacs that had previously appeared in other reference works. An example of a saying from a 1727 compendium by Thomas Fuller that appeared in a 1738 almanac is given in this website article.

Those who are of opinion that money will do everything, may be reasonably suspected of doing everything for money.

He that is of the opinion that money will do everything may well be suspected of doing everything for money.
POOR RICHARD.

He that is of opinion money will do everything may well be suspected of doing everything for money.
BENJAMIN FRANKLIN: Poor Richard’s Almanac, 1753

In conclusion, QI believes that George Savile, 1st Marquis of Halifax should receive credit for this saying based on the 1750 citation. Assuming this ascription is accurate one may conclude that Savile wrote the statement before his death in 1695. Benjamin Franklin included the saying in his almanac for 1753, but this occurred after Savile’s posthumous publication.

(Great thanks to Marian T. Wirth whose inquiry led QI to formulate this question and perform this exploration. Thanks also to the volunteer editors of Wikiquote.)