(1) A little philosophy makes men atheists, though a great deal would cure them of Atheism.

(2) A little knowledge drives man away from God, but deeper knowledge brings him back.

(3) A little knowledge may take us away from God, but further knowledge will bring us back to him.

Would you please help me to find the correct phrasing and a citation?

Quote Investigator: The 1625 collection titled “The Essayes Or Covnsels, Civill and Morall” by Francis Bacon included the original version of the statement under analysis. The spelling in the 1625 text differed from modern spelling. For example, the letters “u” and “v” were sometimes swapped. The following passage employs updated spelling. Emphasis added to excerpts by QI:[1]1625, The Essayes Or Covnsels, Civill and Morall, of Francis Lo. Vervlam, Viscovnt St. Alban. Newly Written, Chapter: of Atheisme, Quote Page 90, Printed by John Haviland for Hanna Barret, London. … Continue reading

I had rather believe all the Fables in the Legend, and the Talmud, and the Alcoran, then that this universal Frame, is without a Mind. And therefore, God never wrought Miracle, to convince Atheism, because his Ordinary Works convince it. It is true, that a little Philosophy inclineth Man’s Mind to Atheism; But depth in Philosophy, bringeth Men’s Minds about to Religion.

Below is a scan of the 1625 book page showing the text above followed by additional selected citations in chronological order. 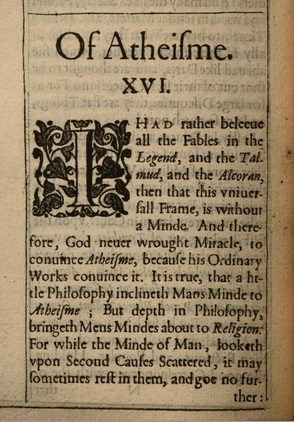 Whence that great observation of Sir Francis Bacon, That a little Philosophie makes men Atheists, though a great deal would cure them of Atheisme.

In 1623 Bacon published “De Augmentis Scientiarum” in Latin. A translation into English by a scholar at King’s College Cambridge was published in 1720, and Bacon’s thought was presented with a different phrasing:[3]1720, Lord Bacon’s Essays, Translated from the Latin by William Willymott (Fellow King’s College Cambridge), Volume 2, Quote Page 8, Printed and Sold by H. Parson, J. Brotherton and W. … Continue reading

But further, it is an assured Truth, and warranted by Experience, that a small, or superficial Taste of Philosophy, may perchance incline a Man to Atheism, but that a deeper Draught brings him back again to Religion.

In 1757 the famous Scottish philosopher David Hume included an instance of the saying in his essay titled “The Natural History of Religion”, but Hume presented a different phrasing for the remark:[4]1757, Four Dissertations by David Hume, I. The Natural History of Religion, II. Of the Passions, III. Of Tragedy, IV. Of the Standard of Taste, Start Page 1, Quote Page 44, Printed for A. Millar, … Continue reading

A little philosophy, says my Lord Bacon, makes men atheists: A great deal reconciles them to religion. For men, being taught, by superstitious prejudices, to lay the stress on a wrong place; when that fails them, and they discover, by a little reflection, that the course of nature is regular and uniform, their whole faith totters, and falls to ruin. But being taught, by more reflection, that this very regularity and uniformity is the strongest proof of design and of a supreme intelligence, they return to that belief, which they had deserted; and they are now able to establish it on a firmer and more durable foundation.

An 1804 letter published in “The Scots Magazine” contained another version ascribed to Bacon containing the phrase “little knowledge” instead of “little philosophy”:[5]1805 July, The Scots Magazine and Edinburgh Literary Miscellany, Letter to the Editor from S.M., Date: March 16, 1804, On the Effects produced on Society by the successful cultivation of Science, … Continue reading

“A little knowledge, says Lord Bacon, makes men atheists; but a more thorough acquaintance with the sciences brings them back again to religion.“

In 1837 another instance in “The Dublin Review” referred specifically to Christianity:[6]1837 April, The Dublin Review, Volume 2, Book Review of “Lectures on the Connexion between Science and Revealed Religion” by Reverend Nicholas Wiseman, Start Page 293, Quote Page 297, … Continue reading

. . . the old adage of Bacon,—“A little knowledge leads men away from Christianity, but a great deal brings them back to it,” is signally confirmed by the voice of history, and the testimony of individual experience.

“Small draughts of philosophy lead to atheism; but larger bring back to God.”

So Pope, “Essay on Criticism,” 1. 215 :—
“A little learning is a dangerous thing;
Drink deep, or taste not the Pierian spring;
There shallow draughts intoxicate the brain,
And drinking largely sobers us again.”

In conclusion, Francis Bacon should receive credit for the statement published in 1625. Many inaccurate versions of the saying have proliferated over the years.

(Great thanks to Richard Costas whose inquiry about a related expression led QI to formulate this question and perform this exploration.)