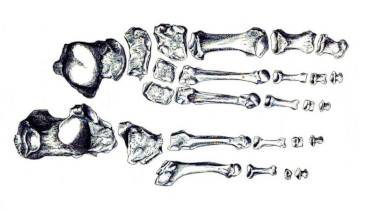 Doctoral research is similar to moving old bones from one graveyard to another.

The mere fact that he is that rare phenomenon, a full professor without a Ph.D. degree, is enough to rile some of his fellow faculty members. Nor does his attitude exactly promote good will.

“I early learned,” he has said, “that a Ph.D. thesis consists of transferring bones from one graveyard to another.“

Ph.D. worship in American universities and even in jerkwater colleges had destroyed casualness and substituted Ph.D. theses of Germanic methodicalness and turgidity for books of brightness. The average Ph.D. thesis is nothing but a transference of bones from one graveyard to another.

Referring to curriculum changes as “the shifting of bones from one graveyard to another,” Dr. Riley added, “The basic trouble with American education is that we do not know for sure what we believe. If we ever determine that, the curriculum will fall speedily into place.”

In 1949 Reverend Joseph B. Mohr discussed his recent move from one house to another during which he had discarded many unneeded items from his attic and basement. He employed a simile that equated items in a filing cabinet with old bones:[4] 1949 September 24, The Morning Call, The Morning Call Sermonette: Dry Bones in a Graveyard by Rev. Joseph B. Mohr, Quote Page 2, Column 4, Allentown, Pennsylvania. (Newspapers_com)

But even then you take with you to your new home many dry bones, as it were—from one graveyard to another. And in your new house you store away those bones in a new resting place.

In my filing cabinet are hundreds and hundreds of ideas, clippings and notes which were bright and lively at one time, but which, as I look upon them now, have become dead, dry bones. They are without sinew and flesh.

It is strong on the character and ways of life of the early settlers, on the growth of the soil, and on everything pertaining to the range; it is weak on information concerning politicians and on citations to studies which, in the manner of orthodox Ph.D. theses, merely transfer bones from one graveyard to another.

In 1953 a book reviewer in the “Los Angeles Times” examined Dobie’s guide and printed an instance variant instance of the saying:[6]1953 January 5, Los Angeles Times, Section 2, Bookman’s Notebook by Joseph Henry Jackson (Book review of “Guide to Life and Literature of the Southwest” (Updated) by J. Frank … Continue reading

Another thing: Mr. Dobie doesn’t like the word “bibliography.” This is a reading list, he notes, and no more; he just won’t have anything to do with a word that smacks of the old scholastic trade that he describes as “transferring bones from one graveyard to another.”

I early learned that a Ph.D. thesis consists of transferring bones from one graveyard to another. —J. Frank Dobie

In 1960 a newspaper in Kentucky printed a variant with an anonymous attribution that used “moving” instead of “transferring”:[8] 1960 February 28, The Courier-Journal, Section 4, When Lawmakers Want Facts, L.R.C. Gets Them, Quote Page 1, Column 3, Louisville, Kentucky. (Newspapers_com)

A thinker once observed that research is moving old bones from one graveyard to another.

‘The average PhD thesis is nothing but a transference of bones from one graveyard to another.’ – J. FRANK DOBIE

In conclusion, J. Frank Dobie should receive credit for this expression. He employed multiple phrasings, and the 1943 and 1944 citations present two of the earliest instances. This vivid figurative language was also employed in other domains.

Image Notes: Illustration of the bones of a human foot from “Human Anatomy” (1911), volume 1, third edition, edited by George A. Piersol, page 420.

(Great thanks to the anonymous scholar whose inquiry led QI to formulate this question and perform this exploration.)