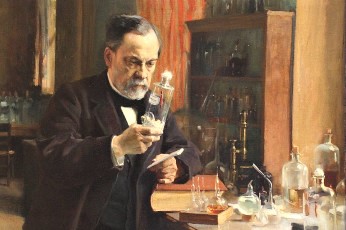 Dear Quote Investigator: Achieving your most vital objectives in life can be quite difficult. Reportedly, the famous French scientist Louis Pasteur once highlighted the personality trait that enabled his enormous success:

Let me tell you the secret that has led me to my goal. My strength lies solely in my tenacity.

Is this quotation genuine? Would you please help me to find a citation for the original French version of this statement?

Quote Investigator: In 1885 Louis Pasteur attended a banquet of veterinary surgeons who praised his remarkable accomplishments. During his speech Pasteur pointed to the attribute that facilitated his scientific breakthroughs. The following passage in French is from the seventh volume of “Œuvres de Pasteur”. Boldface added to excerpts by QI: 1

In life, you have to devote all your efforts to do the best you can. And since we talked a lot about my studies earlier, let me tell you the secret that led me to my goal. My sole strength is in my tenacity.

In 1883 a plaque was placed at Pasteur’s place of birth, and he spoke at the ceremony. While growing up he saw the willpower of his father, and that influenced his character. A 2001 biography provided the following translation of Pasteur’s comments during this occasion: 2

. . . you, my dear father, whose life was as harsh as your harsh trade, you showed me what can be done with patience for sustained effort. It is to you that I owe my tenacity in daily work.

On November 3, 1885 “The Standard” of London published a short item about the banquet, and referred to Pasteur’s remarks although the newspaper employed an indirect phrasing: 3

M. Pasteur was last night entertained at dinner by the National Congress of Veterinary Surgeons now sitting in Paris. In his speech on the occasion the illustrious Professor attributed all his success to his tenacity of purpose, which, he said, constituted his sole strength. It had taken him fifteen years to resolve the problems of the malady of silkworms, of splenic fever in sheep, and of canine rabies; while for the problem of fermentations and of spontaneous generation more than twenty years had been required.

On November 18, 1885 “The Philadelphia Inquirer” of Pennsylvania printed an English version of Pasteur’s comments: 4

Two hundred veterinary surgeons dined recently in Paris. M. Pasteur, in closing his response to a sentiment in his honor, said: “Allow me to tell you the secret of my success. My only strength lies in tenacity of purpose. How could I have found time to dabble in politics when it has taken me fifteen years to solve the problem of the diseases of silkworms and cattle and rabies; and twenty years before that to settle the question of ferments and spontaneous generation?”

The 1950 biography “Louis Pasteur: Free Lance of Science” by Rene J. Dubos included a version of the quotation: 5

He was never discouraged by obstacles, a quality that he regarded as one of his greatest assets—“Let me tell you the secret which has led me to the goal. My only strength resides in my tenacity”—a judgment which has been confirmed by Roux: “How many times, in the presence of unforeseen difficulties, when we could not imagine how to get out of them, have I heard Pasteur tell us, ‘Let us do the same experiment over again; the essential is not to leave the subject.'”

In 1976 a newspaper in Binghamton, New York printed the following from columnist Virginia Pollard who offered advice to students: 6

Good luck in “talking your way into college” (in German, that is). One last word — a famous physician, Louis Pasteur, said, “Let me tell you the secret that has led me to my goal. My strength lies solely in my tenacity.”

Let me tell you the secret that has led me to my goal. My strength lies solely in my tenacity. Louis Pasteur

In conclusion, Louis Pasteur should receive credit for the remarks he delivered in his 1885 speech. The original French has been translated into English in a several different ways over the years.

(Great thanks to Mardy Grothe whose inquiry led QI to formulate this question and perform this exploration. Grothe located the 1950 citation. He operates “Dr. Mardy’s Dictionary of Metaphorical Quotations” and has written many helpful books.)

Image Notes: Oil on canvas portrait of Louis Pasteur by Albert Edelfelt circa 1885; accessed via Wikimedia Commons. The image has been resized, retouched, and cropped.