Quote Investigator: QI has been unable to find this quotation in the writings of A. A. Milne. The earliest conceptual match located by QI appeared in “The Rotarian” magazine in 1917. An advertisement from Tom Phillips presented a four-line verse containing the central idea of the quotation. Boldface added to excerpts by QI:[1] 1917 January, The Rotarian, Volume 10, Number 1, (Advertisement placed by Tom Phillips), Quote Page 94, Column 1, Rotary International, Chicago, Illinois. (Google Books Full View) link 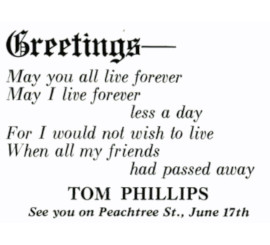 “Pooh, promise you won’t forget about me, ever. Not even when I’m a hundred.”
Pooh thought for a little.
“How old shall I be then?”
“Ninety-nine.”
Pooh nodded.
“I promise,” he said.

The crucial idea of dying shortly before a beloved companion was not mentioned in the passage, and the difference between the two ages was one year instead of one day.

In 1942 a columnist in the “Valley Morning Star” of Harlingen, Texas described Tom Phillips as the “Sage of Santa Rosa” and stated that he was always engaging in interesting activities that kept his name in the paper. The columnist received a card from Phillips containing a close match of the 1917 quotation:[3] 1942 December 20, Valley Morning Star, Rio Roundup by John L. Stone, Quote Page 4, Column 2, Harlingen, Texas. (Newspapers_com)

We received a Christmas card in the mail from Tom which consisted of a very flattering likeness of his face on the right hand side and the following greeting on the left hand side:

“May you live forever-
May I live forever — less a day.
For I would not care to live
when all my friends had passed away.”

In 1951 a newspaper in Knoxville, Tennessee described an elderly gentleman who delivered a line that partially matched the quotation:[4] 1951 May 16, The Knoxville News-Sentinel, Spry Nashvillian Has Been Active Bank Official 58 Years by Leon Powell, Quote Page 5, Column 2, Knoxville, Tennessee. (Newspapers_com)

After pouring a glass of water he toasted the girls
“May you live 1000 years. And may I live 1000 minus one day”
Then he put his ever present cigar back in his mouth and walked away.

In 1968 the theater critic Walter Kerr used the phrase “forever less a day or two” when he referred to a performer with long history of acting:[5] 1968 May 26, The New York Times, Section: Arts and Leisure, Come Out, Come Out, Wherever You Are by Walter Kerr, Quote Page D1, Column 4, New York. (ProQuest)

If you live to be a hundred,
I want to live to be a
hundred minus one day,
so I never have to live without you.
— Winnie the Pooh

It is possible that some book or movie featuring Winnie the Pooh produced by the Disney corporation instead of A. A. Milne included this statement, but QI has not yet identified this product.

In 2000 the phrase “forever, less a day” was attributed within a “Boston Globe” newspaper editorial to Jack Valenti who was the longtime president of the Motion Picture Association of America. Valenti favored maximizing the duration of copyrights:[7] 2000 October 5, Boston Globe (Third edition), Protecting E-Copyrights, Quote Page A26, Boston, Massachusetts. (ProQuest)

Valenti has little to say about this law, although he is mentioned in the Congressional Record as favoring a further extension to “forever, less a day.” Even a mere 95 years is far more than the “limited time” established by the Constitution.

In conclusion, currently there is no substantive evidence that A. A. Milne employed this quotation. Tom Phillips should receive credit for the 1917 verse which expressed a similar idea.

Image Notes: Illustration of the infinity symbol composed of heart symbols from GDJ at Pixabay.

(Great thanks to quotation expert Nigel Rees who mentioned this quotation in his “‘Quote…Unquote’ Newsletter” of January 2020. Rees highlighted the lack of evidence that A. A. Milne wrote the quotation, but he also noted that the passage mentioning a hundred years and ninety-nine years did appear in a Winnie the Pooh work.)