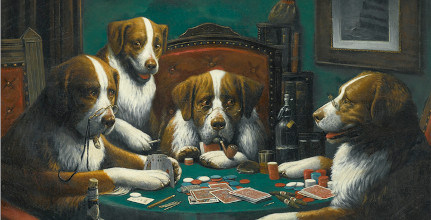 In March 1869 Josh Billings delivered a speech to a large audience at Metzerott Hall in Washington, D.C., and a newspaper reporter paraphrased one of his remarks:[2] 1869 March 3, The National Republican, Local Department, Quote Page 4, Column 2, Washington, District of Columbia. (Newspapers_com)

In December 1869 the “Wyoming Democrat” of Tunkhannock, Pennsylvania printed a collection of remarks under the title “Josh Billings’ Sayings”. The quotation was included with a minor change. The spelling “mutch” was changed to “much”.[3] 1869 December 22, Wyoming Democrat, Josh Billings’ Sayings, Quote Page 1, Column 6, Tunkhannock, Pennsylvania. (Newspapers_com)

Hour after hour the cards were fairly shuffled,
And fairly dealt, but still I got no hand;
The morning came; but I, with mind unruffled.
Did simply say, “I do not understand.”

Life is a game of whist. From unseen sources
The cards are shuffled, and the hands are dealt.
Blind are our efforts to control the forces
That, though unseen, are no less strongly felt.

I do not like the way the cards are shuffled,
But still I like the game and want to play;
And through the long, long night will I, unruffled,
Play what I get, until the break of day.

In 1901 a set of stories told by students at Bowdoin College in Maine was collected and published. A piece by Edgar O. Achorn contained the following line:[6]1901, Tales of Bowdoin: Some Gathered Fragments and Fancies of Undergraduate Life in the Past and Present, Told by Bowdoin Men, Collected by John Clair Minot (Class of 1896) and Donald Francis Snow … Continue reading

“Greater heroism is required to live faithful to the small things of life than to the great, or, to use your own simile, to play a poor hand well than one full of trumps . . .”

Is there not sound philosophy in the legend which Mr. Lewis tells us was inscribed on the headboard of Jack King, deceased: “Life ain’t in holding a good hand, but in playing a poor hand well”?

The game of life is not so much in holding a good hand as playing a poor hand well.
LIEUTENANT H. T. LESLIE,
Toronto, Ontario.

Also, in 1918 the connection to Josh Billings was not forgotten. The popular writer Frank Crane published “21” and credited an instance of the saying to Billings:[9] 1918, 21 by Dr. Frank Crane, Quote Page 9, Doubleday, Page & Company, Garden City, New York. (Verified with scans in Internet Archive archive.org)

I think it was Josh Billings who said that in the Game of Life, as in a game of cards, we have to play the cards dealt to us; and the good player is not the one who always wins, but the one who plays a poor hand well.

Josh Billings observed years ago, the game of life is like a game of cards: the chief credit goes, not to the man who wins, but to the one who plays a poor hand well.

Life consists not in holding good cards but in playing those you do hold well.
Josh Billings

In 1975 a book about child psychiatry published a chapter about young hemophiliacs by Ake Mattsson who was a Professor of Psychiatry and Pediatrics at the University of Virginia Medical Center. Mattsson credited the saying to a famous Scottish novelist:[13]1975, Explorations in Child Psychiatry, Edited by E. James Anthony, Chapter: Psychophysiological Study of Bleeding and Adaptation in Young Hemophiliacs by Ake Mattsson (Professor of Psychiatry and … Continue reading

Robert Louis Stevenson, a victim of pulmonary tuberculosis, once wrote, “Life is not a matter of holding good cards, but of playing a poor hand well.” Children with a chronic physical disorder, such as hemophilia, who have mastered the physical, social, and emotional hardships associated with their illness, well illustrate this point.

Stevenson lived between 1850 and 1894. Hence, he was eighteen years old when Josh Billings used the expression. The citation above appeared many years after the death of Stevenson, and QI has not yet found substantive support for crediting Stevenson.

In conclusion, Josh Billings deserves credit for this expression based on the 1868 citation. Billings was a pseudonym of Henry Wheeler Shaw. Others such as H. T. Leslie employed variants in later years. The attributions to Robert Louis Stevenson and Jack London are currently unsupported.

(Great thanks to Sean Murphy whose inquiry led QI to formulate this question and perform this exploration. Murphy remarked on the attributions to Jack London and Robert Louis Stevenson. He also pointed to the 1901 citation.)