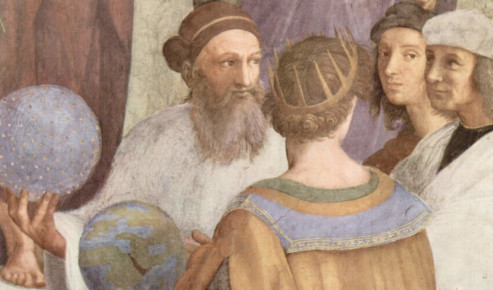 Quote Investigator: Between 1883 and 1885 Friedrich Nietzsche published “Also sprach Zarathustra: Ein Buch für Alle und Keinen” (“Thus Spoke Zarathustra: A Book for All and None”). Zarathustra was an important religious figure, but Nietzsche constructed his own fictional didactic version of the prophet. The third part of the Nietzsche’s book contained a passage in which the character Zarathustra discussed his pursuit of truth. Boldface added to excerpts by QI: 1

The following text is from Digital Critical Edition of the third part of “Also sprach Zarathustra” based on the publication from 1884: 2

In 1896 a multi-volume edition of “The Works of Friedrich Nietzsche” included an English translation of “Also sprach Zarathustra” created by Alexander Tille: 3

By many ways and modes I have come unto my truth; not on one ladder I climbed up unto the height, where mine eye roveth into my distance.

And I have always asked other folk for the way unwillingly. That hath ever been contrary unto my taste! Rather have I asked and tried the ways for myself.

A trying and asking hath all my walking been. And, verily, one must also learn how to answer such questioning! But that — is my taste —

No good, no bad, but my taste, for which I have neither shame nor concealment.

In 1911 a different multi-volume edition of “The Complete Works of Friedrich Nietzsche” included a translation of “Also sprach Zarathustra” created by Thomas Common: 4

By divers ways and wendings did I arrive at my truth; not by one ladder did I mount to the height where mine eye roveth into my remoteness.

And unwillingly only did I ask my way—that was always counter to my taste! Rather did I question and test the ways themselves.

A testing and a questioning hath been all my travelling:—and verily, one must also learn to answer such questioning! That, however,—is my taste:

—Neither a good nor a bad taste, but my taste, of which I have no longer either shame or secrecy.

“This—is now my way,—where is yours?” Thus did I answer those who asked me “the way.” For the way—it doth not exist!

In 1933 British politician and author John Strachey published “The Coming Struggle for Power” which included the following passage. Strachey attributed an instance of the saying to Nietzsche’s fictional prophet: 5

The first answer to that question is that the discovery of historical truth is a more complicated matter than had been supposed. “This then is my truth,” remarked Zarathustra. “Now, tell me yours.” Historical truth for, say, the working class of Great Britain, may be something rather different from historical truth for the professional historians. We have been taught by the physicists that the position of the observer is an integral factor in the characteristics of the thing observed.

In 1937 “The Observer” newspaper of London printed a piece by drama critic Hubert Griffith which contained the following: 6

There is a phrase in Nietzsche, “I have told you my truth—now tell me your truth.”

The saying has often been attributed to U.K. politician Aneurin Bevan, and a separate article centered on that attribution is available here.

In conclusion, Friedrich Nietzsche constructed the character Zarathustra who employed the phrase „Das — ist nun mein Weg, — wo ist der eure?“ (“This — is my way, — where is yours?”). QI conjectures that this phrase evolved by 1933 into the saying “This then is my truth; now, tell me yours”.

Image Notes: Detail from the painting “The School of Athens” by Raphael circa 1509. the detail shows Zoroaster (Zarathustra) displaying a globe to fellow philosophers.

(Great thanks to Mark Wainwright whose inquiry led QI to formulate this question and perform this exploration. Wainwright asked about the connection to Aneurin Bevan which will be discussed in a separate article.)