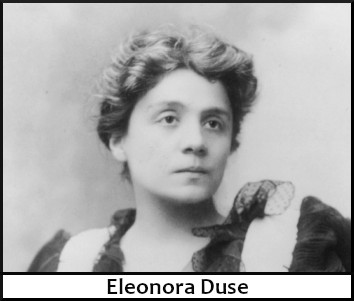 Dear Quote Investigator: The prominent Italian actress Eleonora Duse believed that the joyful appreciation of nature provided evidence of a vivacious soul. She highlighted the simple beauty inherent in blue skies and blades of grass. Would you please help me to find a citation.

Quote Investigator: English stage actor John Martin Harvey delivered a lecture titled “Character and the Actor” before the Ethological Society in London, and the text was printed in pamphlet form in 1908 by a publisher based in Florence, Italy. Harvey quoted the famous Italian thespian: 1

There seems a subtle truth in Eleonora Dusé’s words, when she says:—

“If the sight of the blue skies fills you with joy, if a blade of grass springing up in the fields has power to move you, rejoice, for your soul is alive; and then aspire to learn that other truth—that the least of what you receive can be divided. To help and share—that is the sum of all knowledge, that is the meaning of art.”

Harvey popularized this quotation, and its accuracy depends on his veracity. Duse was an international star who appeared in Paris, London, and New York; however, she always preferred to speak Italian during her performances. Thus, QI conjectures that the original quotation was in Italian.

In November 1908 “The Mask: The Journal of the Art of the Theatre” printed Harvey’s text 2 and in 1909 the piece appeared in the “The Stage Year Book” published in London. 3 Thus, the quotation achieved further distribution.

In 1954 a compendium titled “Actors On Acting: The Theories, Techniques, and Practices of the Great Actors of All Times as Told in Their Own Words” included a section dedicated to Eleonora Duse. A longer version of the quotation was included, and the accompanying footnote pointed to a 1930 book by John Martin Harvey: 4

If the sight of the blue skies fills you with joy, if a blade of grass springing up in the fields has power to move you, if the simple things of nature have a message that you understand, rejoice, for your soul is alive; and then aspire to learn that other truth, that the least of what you receive can be divided. To help, to continually help and share, that is the sum of all knowledge; that is the meaning of art.

The artist-actor gives the best of himself; through his interpretations, he unveils his inner soul. By these interpretations only should he be accepted and judged . . . (Footnote 3)

In 1966 producer-actress Eva Le Gallienne published a biography of her friend Duse titled “The Mystic in the Theatre: Eleonora Duse” which included a shortened version of the quotation: 5

Huneker writes of Duse’s acting: “She is the exponent of an art that is baffling in its coincidence with nature. From nature what secret accents has this Italian woman not overheard?—Secrets that she embodies in her art.”

As she herself once said: “If the sight of the blue skies fills you with joy, if a blade of grass has power to move you, rejoice, for your soul is alive.”

In 1968 the “Philadelphia Daily News” of Pennsylvania printed a piece about Duse: 6

Duse’s fame spread all over the world. Wherever she went, struggling young actors would flock to her performances and sit at her feet in worshipful adulation.

“Don’t scrutinize other people’s actions,” she would tell them. “Avoid profitless occupations and store up all the good things you see and hear. Work and learn and you will find strength with each new effort. Forget yourself, and you will forget your fears. If the sight of the blue skies fills you with joy, if a blade of grass has the power to move you, rejoice, for your soul is alive.”

In 2000 “Women’s Wit and Wisdom” included an entry for the quotation with a citation pointing to “Actors on Acting”.
7

In conclusion, of Eleonora Duse was given credit for this quotation by John Martin Harvey in 1908. QI believes this evidence was substantive and the ascription to Duse is probably accurate.

Image Notes: Portrait of Eleonora Duse by Aimé Dupont circa 1896 available via the United States Library of Congress’s Prints and Photographs division. Image has been cropped and resized.

(Great thanks to Jane Rawson whose inquiry led QI to formulate this question and perform this exploration.)