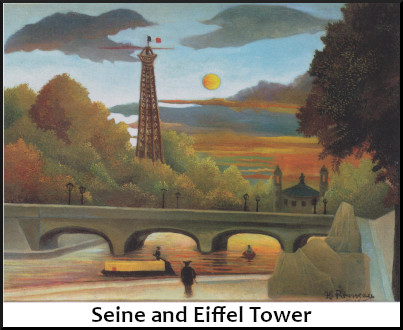 Quote Investigator: The earliest match located by QI appeared in a 1914 report from the Manchester Literary Club of England. The brief note described a meeting of the club during which a member named Alexander Hadden presented a paper about the city of Paris. The following passage about prominent writer and activist William Morris included a punchline that was spoiled by a typo. The word “can” was supposed to be “can’t”. Boldface added to excerpts by QI:[1]1914, Report and Proceedings of the Manchester Literary Club for the Session 1913-14 with Rules and List of Members, Article Date: January 12, 1914, Comment on article titled: Paris by Alex. Hadden, … Continue reading

The story about the Eiffel Tower was reassigned to prominent French short story author Guy de Maupassant by 1975, but he died many years earlier in 1893. Thus, this evidence was not substantive.

I left Paris and France also, because, for one thing, I was weary to death of the Eiffel Tower. Not only could I see it from every direction, but I found it everywhere, copied in all kinds of known materials, exhibited in every show-window, a perpetual racking nightmare.

In 1914 a member of the Manchester Literary Club attributed the comical remark about the Eiffel Tower to William Morris as noted previously in this article.

An ardent disciple inquired whether the awful rumour were true that when he was in Paris “the Master” spent most of his time at the Eiffel Tower. “Yes,” said Morris, “quite true. I have my meals there, I write my letters there. I see visitors there, and I’d sleep there if there were any beds.”

“Ah,” said the disciple, anxious to be on the right side, “I suppose you are so impressed by that feat of engineering skill, its balance, its poise, its soaring aloft to the ethereal blue, its cloud-capped summit,” and much more of the same kind of thing, which Morris allowed to run on till it ran dry. Then he turned on the disciple with a grim gaze and a savage thump on the table. “No, sir,” said Morris, “no such rot. When I’m in Paris I go to the Eiffel Tower because it’s only when I’m there that I can’t see the damned thing.”

One of the most bitter things said of it was by William Morris. He used to have his meals in the Eiffel Tower restaurant, and regretted he couldn’t work and sleep there.

“Impressed with the tower?” inquired a startled friend. “Impressed!” said Morris. “No such rot. I go there when I’m in Paris because it’s only when I’m there that I can’t see the damned thing!”

William Morris was once in a company of artists who were heartily abusing the Eiffel Tower. To their surprise, Morris asserted that he never failed to climb the tower when in Paris. Asked indignantly for an explanation, Morris replied to this effect:

“When you are on top you are on the only spot in Paris where you can’t see the damned thing.”

When the English poet, Utopian, and arts and crafts pioneer, William Morris, was in Paris, he usually spent most of his time in the restaurant in the Eiffel Tower, eating and doing his work there. “You must like the Tower very much,” someone commented. “Like it!” said Morris. “I stay there because it is the only place in Paris where I can avoid seeing the damned thing!”

In 1944 publisher and anecdote gatherer Bennett Cerf published the compilation “Try and Stop Me”. Curiously, Cerf presented a new version of the yarn with Morris replaced by journalist and author Elliot Paul:[9] 1944, Try and Stop Me by Bennett Cerf, Chapter 3: The Literary Life, Quote Page 116, Simon & Schuster, New York. (Verified with hardcopy)

Before the war, Elliot Paul maintained an apartment in Paris. One day his friends learned that he had rented desk space in the restaurant on the first landing stage of the Eiffel Tower. An incredulous reporter from the Paris Herald found him there, typing away contentedly on a story. “Well,” said the reporter, “you certainly must be attached to the Eiffel Tower!” “Attached to it!” snorted Paul. “This is the only place in Paris where I can avoid seeing the damn thing!”

“You must be very much impressed by the Tower.”
“Impressed nothing!” exclaimed Morris. “I spend my time here because it’s the only place in Paris where I can avoid seeing the blasted thing.”

Political anecdotes are rife, like the one about the monstrous Palace of Culture that Stalin built in the middle of Warsaw: The best view of Warsaw, they say, is the one from the Palace, because it is the only place in Warsaw from which you can’t see the Palace. As we drove past it one time an amused official murmured to me: “Small but in good taste, don’t you think?”

“If you don’t like the Empire State Building, why have you got your office in it?”
“It’s the only way I can avoid seeing the damned thing,” said the tenant.

. . . Guy de Maupassant. The latter remained the most consistent enemy of “this tall, skinny pyramid of iron ladders, this giant and disgraceful skeleton . . .” It was said that he frequently dined in the restaurant of the tower because from there he could not see it in its entirety.

Author Guy de Maupassant, it was said, so hated the tower that he preferred to dine in the restaurant on its upper level because from there he could not see “this giant and disgraceful skeleton.”

In 1982 “The Observer” of London published a piece by arts journalist Gillian Widdicombe who shared a quip about the National Theatre:[15] 1982 February 28, The Observer, Section: Observer Review, What’s on at the Barbican by Gillian Widdicombe, Quote Page 25, Column 3, London, England. (Newspapers_com)

In conclusion, this family of humorous stories and quips began to circulate by 1914. The initial incarnation credited William Morris with a remark about the Eiffel Tower. Many years later Elliot Paul and Guy de Maupassant received credit for the same comment about the Eiffel Tower. A comparable joke about the Palace of Culture in Warsaw with an anonymous attribution was circulating by 1958, and a similar jest about the National Theatre in London was circulating by 1982.

Image Notes: Painting of the “Seine and Eiffel Tower in the Sunset” by Henri Rousseau circa 1910.