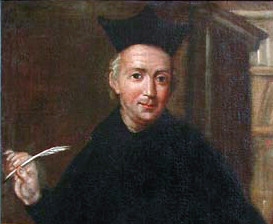 Dear Quote Investigator: Thoughtful people periodically revise their opinions as their knowledge grows. Obstinate and foolish people develop an opinion and then refuse to change it even when evidence accumulates that their original position is deeply flawed. Clinging to erroneous beliefs is wrong-headed.

The Spanish Jesuit writer and philosopher Baltasar Gracián (Baltasar Gracián y Morales) said something like this in the 17th century. Would you please help me to find a citation?

In 1877 the British author Mountstuart Grant Duff published a piece in “The Fortnightly Review” of London which included material from Gracián’s book. The Spanish text above corresponded to maxim 183, and Duff presented the following partial translation: 2

Do not hold your opinions all too firmly.—Every blockhead is thoroughly persuaded that he is in the right, and every one who is all too firmly persuaded is a blockhead, and the more erroneous is his judgment the greater is the tenacity with which he holds it.

In 1892 Joseph Jacobs, a corresponding Member of the Royal Academy of History in Madrid, published a translation of “Oráculo Manual y Arte de Prudencia” (“The Art of Worldly Wisdom”) which included the following: 3

Do not hold your views too firmly.

Every fool is fully convinced, and every one fully persuaded is a fool: the more erroneous his judgment the more firmly he holds it. Even in cases of obvious certainty, it is fine to yield: our reasons for holding the view cannot escape notice, our courtesy in yielding must be the more recognised.

In 1957 “The Book of Unusual Quotations” compiled by Rudolf Flesch included the first line listed above: 4

Every fool is fully convinced, and everyone fully persuaded is a fool.
Baltasar Gracián

In 1985 “A Teacher’s Treasury of Quotations” compiled by Bernard E. Farber included the following entry: 5

Every fool is fully convinced, and every one fully persuaded is a fool: the more erroneous his judgment the more firmly he holds it.
—Balthasar Gracian, The Art of Worldly Wisdom, clxxxiii (1647).

In 1992 Christopher Maurer offered another translation: 6

Don’t hold on to anything too firmly. Fools are stubborn, and the stubborn are fools, and the more erroneous their judgment is, the more they hold on to it. Even when you are right, it is good to make concessions: people will recognize you were right but admire your courtesy.

Hold to nothing too violently. Every fool stands convinced; and everyone convinced is a fool; and the faultier a man’s judgment, the firmer his conviction; even with the proof on your side, it is well to make concession; for your reasons are known and your gentlemanliness is recognized.

In conclusion, Baltasar Gracián y Morales deserves credit for the adage and commentary he penned in Spanish in 1647. Several different translations into English have been crafted during the ensuing years.

(QI has received many requests to examine a quotation attributed to Mark Twain about fooling people. While investigating the Twain attribution QI encountered the remarks of Baltasar Gracián which led QI to formulate this separate question and perform this exploration.)