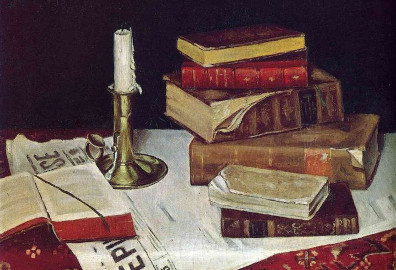 Dear Quote Investigator: A clique can form around a cultural organization or periodical and transform it into an insular mutual admiration society. Detractors of “The New York Review of Books” have given the journal the following nickname:

The New York Review of Each Other’s Books

The frighteningly articulate house organ of a self-promoting Manhattan coterie, it could easily be renamed the New York Review of Each Other’s Books. And like many people who have chosen to dwell intimately with the printed word, the New York Review clique maintains a love-hate relationship with the art it serves. Hate often seems to be getting the better of it.

Based on the above citation QI tentatively credits Alan Levy with coining this barbed expression.

There has been a long history of annoyance regarding authors who achieve success and popularity by combining into tight-knit groups whose members evaluate each other’s books favorably. In 1838 a letter in the “Morning Advertiser” of London mentioned two writers assisting one another on the path to fame:[2] 1838 April 20, Morning Advertiser, The Question of Copyright (Letter to the Editor from OBSERVATOR), Quote Page 3, Column 4, London, England. (British Newspaper Archive)

Authors sometimes review their own books, and sometimes they review each others’ books. There is a certain author who has lately and very deservedly risen into great celebrity by his writings, and he has friend, a very respectable gentleman, who is also an author, and the editor of a very popular periodical. These gentlemen have a literary friend, with whom I have been acquainted for nearly 40 years. The last-named of the gentlemen assured me one day, in confidence, that “these two former gentlemen actually reviewed each other’s works.”

Its little knot of mediocrities and parasites—all writing books themselves and reviewing each other’s books—behave regularly in this way; so, who can wonder if they excite no sympathy, when engaged in a law-suit, whether successful or not? No bookseller thinks them honest; no man of letters thinks them able.

In 1890 “The Wakefield Free Press” of England published a piece about a worthy author who was not a member of a self-promoting clique:[4] 1890 January 25, The Wakefield Free Press, Talks About Authors and Books by William Andrews, F.R.H.S., Quote Page 3, Column 1, Yorkshire, England. (British Newspaper Archive)

His days have been passed far away from the busy haunts of men, and outside mutual admiration circles, the members of which review each other’s books.

In 1929 Ellen Wilkinson who was a Member of the U.K. Parliament published the novel “Clash”, and a book reviewer reprinted a passage from the work lambasting an influential coterie:[5] 1929 April 20, The Leeds Mercury, A Woman M.P.’s Novel by W.L.A., Quote Page 4, Column 2, Leeds, England. (British Newspaper Archive)

. . . exclusive Bloomsbury circle who bestowed fame on themselves by writing reviews of each other’s books. As each slender work appeared it was greeted as a new Tchehov, a more sensitive Dostoievsky, a respringing of the fountain of Shelley’s genius. Most people read the reviews and not the books, and as all they wanted was to be told which was the book of the hour the circle was accepted as the last word in literary genius.

In 1968 Alan Levy included the expression under examination within his book “The Culture Vultures” as mentioned previously.

Careerists are category two, and Levy’s insights into film and literary criticism in Saturday Review, New York Times Book Review section, and the New York Review of (“each other’s”) Books, etc., are an insult to egos and rightly so.

Authors and reviewers were entangled in a tight literary incestuousness (“The New York Review of Each Other’s Books” was the current quip ).

Certain familiar criticisms of The New York Review of Books are exaggerated. It was unfair to call it The New York Review of Each Other’s Books. True, the cast of reviewers is finite, but a check of the index reveals that well over 500 people, ranging all the way from tepid liberals to extreme radicals, have contributed during the review’s first six years.

The first period, so named by Richard Hofstadter, was historically determined. In very early times, the Review had no place to go except to the cheap (five cents a word) and local talent that also happened to be authors or associates of authors of the sort of books to which the Review was devoted.

The New York Review of Books was condemned long ago as “The New York Review Of Each Other’s Books,” and probably deserved the slur. In the current issue, dated Feb. 7, V.S. Pritchett reviews John LeCarre’s “Smiley’s People,” liking it, while the adjoining piece is Robert Powers’ favorable review of V. S. Pritchett’s “On The Edge Of The Cliff.”

In conclusion, the first use of this jest located by QI appeared in a book by Alan Levy in 1968. He is the leading candidate for creator of this remark. Richard Hofstadter is the second place candidate based on the 1974 citation.

Image Notes: Painting of “Still Life with Books and Candle” by Henri Matisse circa 1890. Image has been cropped and resized.

(Great thanks to the anonymous person whose inquiry led QI to formulate this question and perform this exploration. Thanks also to Barry Popik who explored this saying previously and located citations beginning in December 1969. Many thanks to James Eric Lawson who sent multiple valuable citations to QI including the 1929 cite about Bloomsbury, the 1969 Goldman cite, and the 1974 cite that suggested Richard Hofstadter was the coiner of this phrase.)