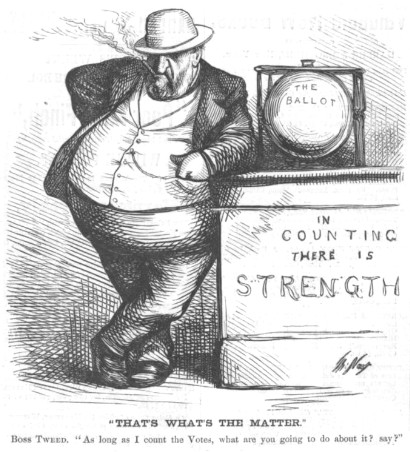 The earliest match known to QI appeared in October 1871 within a single-panel work by influential cartoonist Thomas Nast depicting politician William Marcy Tweed standing next to a ballot box. Tweed was known by the nickname Boss Tweed because of his political power and wealth. Nast titled his cartoon “THAT’S WHAT’S THE MATTER”, and he placed the following derisive words into the mouth of Tweed. Boldface added to excerpts by QI:[1]1871 October 7, Harper’s Weekly, Cartoon title: “That’s What’s the Matter”, (Caption of one panel cartoon by Thomas Nast), Quote Page 944, Column 1, Harper & … Continue reading

There is no longer any doubt that Zack Chandler is to be credited with the authorship of the famous saying: “Give me the Returning Boards of a country, and I care not who cast its votes.”

“I care not who casts the votes of a nation, provided I can count them,” Napoleon failed to remark. If he had said it, however, he would have frankly expressed the sources of imperialism, and would have made a useful addition to the world’s stock of quotations.

It is a well known rule among politicians that the party which counts the votes is likely to win. The old saying, “I care not who makes the laws of the people if I can make their songs,” is adapted thus: I care not which side throws a majority of the votes if I can have the counting of ’em.

In October 1890 another politician was given credit for the saying within the pages of a Marshall, Michigan newspaper:[5] 1890 October 24, The Marshall Statesman, (Short untitled article), Quote Page 3, Column 3, Marshall, Michigan. (Newspapers_com)

“Let me count the votes, and I care not who casts them or how they are cast.” This is the motto of Mr. Breckinridge, of the Second Arkansas district. But will this scheme work as well in 1890 as it did in 1888? The chances are against its success this year.

For decades it has been the rule that the party which presides over elections wins them. It is not a question of who votes, but of who counts the votes.

Oh! They say you can vote for this and that.
It is not so much who votes as who counts the votes.

In 1989 “The Observer” newspaper of London attributed the saying to U.S.S.R. leader Joseph Stalin who had died in 1953:[9] 1989 November 05, The Observer, The Rise and Rise of Forsyth the Unstoppable by Ian Bell, Quote Page 11, Column 3, London, England. (Newspapers_com)

Then again, as Stalin is supposed to have said, it’s not who votes that matters but who counts the votes.

I consider it completely unimportant who in the party will vote, or how; but what is extraordinarily important is this—who will count the votes, and how.

In conclusion, QI believes that Thomas Nast deserves credit for the caption in his 1871 cartoon which was satirizing William Marcy Tweed. An efflorescence of sayings appeared subsequently.

In 1877 “The Daily Examiner” of San Francisco attributed an instance to Zack Chandler, but QI conjectures that this attribution was based on political hostility. Boris Bazhanov in 1992 attributed an instance to Joseph Stalin, but there was a long time delay between when the remark was supposedly spoken in 1923 and when it was reported; hence, the credibility of the claim was reduced.

Cartoon by Thomas Nast published in “Harper’s Weekly” on October 7, 1871.

(Great thanks to Jim Brewster, Sue Ferrara, and an anonymous person whose inquiries led QI to formulate this question and perform this exploration. Also, thanks to researcher Fred R. Shapiro who included the crucial 1871 citation in “The Yale Book of Quotations”.)