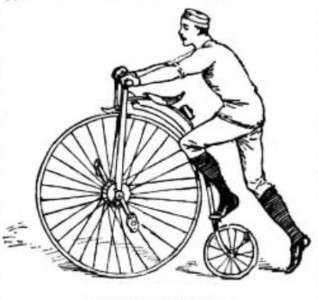 Quote Investigator: On August 12, 1894 “The New York Times” published an article titled “Lunacy in England” about bicycle riders. The piece was filled with comical exaggerations, and QI believes that it was intended to be humorous. Boldface added to excerpts by QI:[1] 1894 August 12, New York Times, Lunacy in England, Quote Page 4, Column 4 and 5, New York. (ProQuest)

Still, there is not the slightest doubt that bicycle riding, if persisted in, leads to weakness of mind, general lunacy, and homicidal mania. In the opinion of one of the ablest and most experienced of British lunatics, the habit of watching the revolution of the forward wheel develops in the mind of the bicycle rider a tendency to reason in a circle.

Below are additional excerpts and a conclusion.

“The New York Times” article suggested that the number of deaths and injuries caused by bicycle riders was preposterously large. The legal consequences of this mayhem were unmentioned:

Men who are apparently mild clergymen or placid physicians will, when mounted on the bicycle, run down other men and women without distinction, and leave them dead or dying on the pavement, without waiting either to help the wounded or to remove the bodies of the dead.

There are probably hundreds of bicycle riders in England to-day each one of whom has slain from ten to twenty persons and wounded double that number by driving bicycles over their bodies. These bicyclists are on ordinary occasions men of humane impulses and correct conduct, but they are a prey to that thirst for homicide which habitual bicycling so commonly produces, and it would be absurd to speak of them as persons of sound mind

The author was unhappy with the “mannish and ugly garments” adopted by woman bicycle riders:

The woman who rides a bicycle manifests her mental unsoundness by her dress. She may have dressed for years with decency and good taste, but after a few weeks’ experience of the bicycle passion she is certain to manifest a desire to dress herself in the most eccentric and conspicuous garments.

In conclusion, during the late 19th century and early 20th century many seriously intended criticisms were leveled at bicycles and their effects on men and women. Yet, QI believes that this piece in “The New York Times” using deliberate exaggeration was intended to be funny.