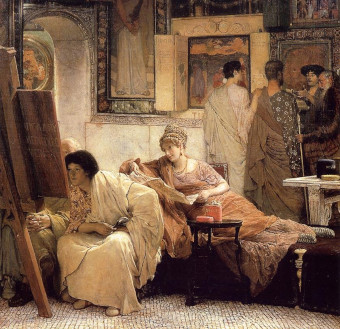 In 1911 a meeting of the International Musical Congress was held in England. The Lord Mayor of London Thomas Vezey Strong addressed the group and recounted the story. He also applied the lesson to the musical domain:[3]1911 July 1, The Musical Times, Volume 52, Number 821, The International Musical Congress, Held in London from May 29 to June 3, 1911, Address from the Lord Mayor, the Right Honorable Sir Thomas … Continue reading

I heard the other day of a guide in one of the galleries of Florence. He was in charge of some magnificent paintings, and was showing some visitors from a country which was not Italy—and I hope they were not Englishmen—the contents of the gallery, and after five minutes’ hurried look round at the paintings which were painted for eternity they said, ‘Old Masters; we prefer the new ones.’ The poor attendant of the gallery found all his patriotic instincts uprising against the sneering of the visitors, and speaking to one of them he said: ‘Our pictures are not on trial; it is the visitors that are.’

I think if one cared to point a moral to adorn that tale I should suggest to my friends in England that when they are discussing foreign music, it is not the music that is on its trial but the Englishmen who dare to criticise it. And again with profound submission I would urge even upon my foreign friends that when they come to England and hear the best work of our English composers and musicians that our music is not on trial, it is the foreign visitor. (Cheers.)

The preacher told of a tourist who went through a great gallery in Italy and said petulantly to the guide as she looked at the masterpieces round about, “I don’t like these pictures.”

And the guide replied, “Madame, these pictures are not on trial. You are on trial.”

Well, of course, from one angle this was indefensible snobbery. After all, a tourist has just as much right to an opinion as the whole procession of posterity.

Heywood Broun also shifted the anecdote to the domain of playwrights and imagined Eugene O’Neill delivering the punchline:

Still, I did feel that it might be altogether fitting for Eugene O’Neill to appear before the play jury when “Desire Under the Elms” came up for judgment. I think he might say with justice to that jury, “My play is not on trial—you are on trial.”

A tourist, armed with his guidebook, went up to the curator of the famous Tribuna of Uffizi gallery in Florence, and asked:

“Are these your masterpieces? I certainly do not see much in them myself!”

“Sir,” replied the curator, “these pictures are not on trial: it is the visitors who are on trial!”

In 1935 “The New York Times” published a letter to the editor containing a version of the story set in Paris:[6] 1935 November 17, New York Times, To the Editor (Letter to the Screen Editor from Nicholas Haz), Quote Page X4, Column 6, New York. (ProQuest)

. . . the tourist who decided that even the best pictures of the Louvre did not amount to much. To which remark the guide answered: “Sir, those pictures are not on trial, you are on trial.”

In 1948 George W. Taylor who was a Professor of Industry at the Wharton School of the University of Pennsylvania told a version referring to the Mona Lisa:[7]1948, My Job and Why I Like It, Chapter: Digest of talk by Dr. George W. Taylor at the Grand Awards Banquet in Detroit on December 13, 1947, Start Page 17, Quote Page 18, Published by General Motors … Continue reading

This rich American took a look at it, and he said, “That painting is not so hot. I don’t think those lines are very good, and the colors are faded. That doesn’t impress me at all.” One of the guards in the Louvre Museum overheard the American. He went up to him, tapped him on the shoulder and said, “Mister, when you look at that painting, it is not on trial. You are on trial.”

My own favorite is “Good Men and True,” as wonderful a comedy of bloodshed as the literature of American manners can furnish. It is a sort of “test” volume with me, a test of a reader’s taste and his sense of humor. And remember that Gene Rhodes is not on trial when you read it—you are on trial.

Often literary classics fail to interest a class. It is easy to say that the acknowledged work of art is not on trial but that the students’ tastes are being judged and found faulty. The presumption is that the classics contain a universal message. But the students must decode that message, then encode it so it says something meaningful to their unique situation.

In conclusion, QI conjectures that the seed of this anecdote occurred in commentary about the Bible such as that presented in the 1890 citation. The remark was subsequently transferred into the secular domain of art galleries. Currently, F. W. Macdonald is the leading candidate for creator of this tale based on the 1904 citation. The anecdote evolved and was shifted to the realms of music, theater, literature, and more.

Image Notes: Public domain image of a painting of “A Picture Gallery (Benjamin Constant)” by Sir Lawrence Alma-Tadema circa 1866. The image has been cropped and resized.

(Great thanks to Brad Verter and Bill Mullins whose inquiry led QI to formulate this question and perform this exploration.)