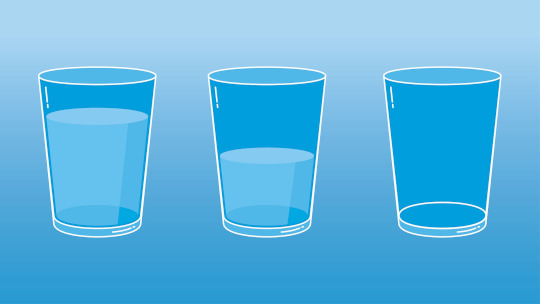 In 1908 a precursor appeared in a Minnesota newspaper with an acknowledgement to journalist David Dodge of “The New York World”. A fictional Professor of Mathematics named Nix used wordplay to generate a “curious paradox”. The joke hinged on the equivalence of “half full” and “half empty”. The words “pessimist” and “optimist” were not mentioned:[2] 1908 December 23, The Minneapolis Journal, Professor Nix and Mathematics by David Dodge of New York World, Quote Page 20, Column 5, Minneapolis, Minnesota. (Newspapers_com)

Hugh Overman thinks that someone ought to develop a decent gasoline gauge. “As it is now,” he says, “when the indicator points to one-half, you can’t tell whether it means half full or half empty.”

. . . Ted Healy’s crack that he couldn’t tell whether the gas tank was half full, or half empty, because the needle pointed half way.

How much gas do we have, Eddie. Egad, Johnnie, it points to half, but whether the darn thing means half-empty or half full, I don’t know.

On April 4, 1935 “The Daily Telegraph” of London printed a quip delivered by Josiah Stamp during a speech the previous evening:[9] 1935 April 4, The Daily Telegraph, The Optimist and the Pessimist, Quote Page 9, Column 4, London, England. (Newspapers_com)

Sir Josiah Stamp gave this definition of an optimist and a pessimist when he spoke at the dinner of the Society of Incorporated Accountants and Auditors in London last night:

Sir Josiah Stamp made lively play with the accountants in proposing the toast of “Trade and Industry.” The optimist, he said, was one who described a glass as being half-full, and the pessimist one who said it was half-empty.

The optimist believes that absence make the heart grow fonder, while the pessimist sighs, “Out of sight, out of mind.”

The optimist is the man who says “Hurrah! My glass is still half full.” The pessimist says, “Alas! my glass is half empty.”

The pessimist grumbles because roses have thorns. The optimist is thankful that thorns have roses.

An optimist is a man who says the bottle is half full when it’s half empty.
Author unidentified

In conclusion, the earliest instance discovered by QI appeared in April 1929. No attribution was specified; hence, the originator remains unknown. Josiah Stamp was an important locus of transmission. He used an instance during an address he delivered in 1935.

Image Notes: Public domain illustration of a water glass that is half empty or half full. A classic quandary of the optimist versus pessimist. Illustration from neotam at Pixabay. Image has been resized.

(Great thanks to _ynsc_ whose inquiry led QI to formulate this question and perform this exploration. Also, thanks to previous researchers Charles Clay Doyle, Wolfgang Mieder, and Fred R. Shapiro. “The Dictionary of Modern Proverbs” contains a germane 1930 citation, and “The New Yale Book of Quotations” lists the November 13, 1935 attribution to Josiah Stamp in “The New York Times”.)