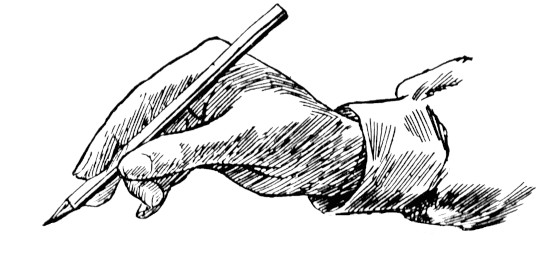 Dear Quote Investigator: When you are attempting to write a book you must move forward and put words on a blank page or screen even if you fear that your output is flawed. Eventually, you will be able to revise and improve your initial draft. This writing advice can be summarized in the following two ways:

Who crafted this advice? Would you please help me to find a citation?

She says she would never crib an idea from another book — let alone take dialogue or entire scenes — even if her prose wasn’t coming easily. “I believe writing is a discipline. I write every day. Even if I’m not writing well, I write through it. I can fix a bad page. I can’t fix a blank one.”

In August 1997 the remark by Roberts caught the eye of a journalist at the “Chicago Tribune” of Illinois. The remark was reprinted in a section called “Quotables”:[2] 1997 August 15, Chicago Tribune, Quotables, Quote Page 27, Chicago, Illinois. (ProQuest)

“I believe writing is a discipline. I write every day. Even if I’m not writing well, I write through it. I can fix a bad page. I can’t fix a blank one.”

–Romance novelist Nora Roberts, whose books were found to have been plagiarized by fellow romance novelist Janet Dailey, who has apologized to Roberts, on how she copes with dry spells.

When she’s at home in Keedysville, Md., she keeps to a regular routine of writing from 9 a.m. to 5 p.m. daily. Asked if she ever suffers from writer’s block, she replied, “I don’t believe in it.”

“Writing is a habit, like exercise,” she said. “You have to write something, even if it’s bad at first. You can always fix it, but you can’t fix a blank page.”

Getting such a writing habit takes self-discipline, Roberts said, something she learned in Catholic school as a child.

Nora Roberts has a great suggestion for any writer suffering from a bad case of perfectionism: be willing to write badly. “I can fix a bad page,” she points out, “but I can’t fix a blank one.” To which romance writer Susan Elizabeth Phillips adds, “I found the courage to fill my screen with bad pages on those days when my mind was mush, then trusted myself to fix them later.”

I love whoever wrote this motivational quote: “I can fix a bad page, but I can’t fix a blank one.”

Being forced to write a synopsis before you’ve written the book is necessary for some of us and is eating away the artistic souls of others. Figure out which one you are.

VT: How do you improve your writing?

Eileen: The writer Nora Roberts likes to say that she can fix anything but a blank page. That’s my motto. It’s real hard to fix something when you’ve got nothing done. You have to start with the first draft.

> LORI AVOCATO You can fix, polish, and sell anything except a blank page. Ergo, sit down and write.

> LIZ CARLYLE Never look at a blank page for more than two minutes. Write something. Anything. Even garbage will get your neurons firing. Eventually it’s apt to morph into something useful. If not, you can take pride in having resisted the urge to dawdle.

In 2011 “The Fresno Bee” of California printed comments from author and teacher Bonnie Hearn Hill:[8] 2011 October 6, The Fresno Bee, Successful writer is mentor to others by Bill McEwen, Quote Page A3, Column 1, Fresno, California. (Newspapers_com)

Nora Roberts says, “You can’t fix a blank page.” And how true is that? Write something bad so Future You has something to fix! Otherwise Future You will be very bored and disappointed that Past You didn’t live up to your end of the bargain and put something down on that page.

In conclusion, Nora Roberts did employ both of the quotations at the beginning of this article. Her cogent comments have appeared in numerous tutorial books for budding authors.

Image Notes: Public domain illustration of a hand writing from the 1912 work “The Book of Knowledge”.