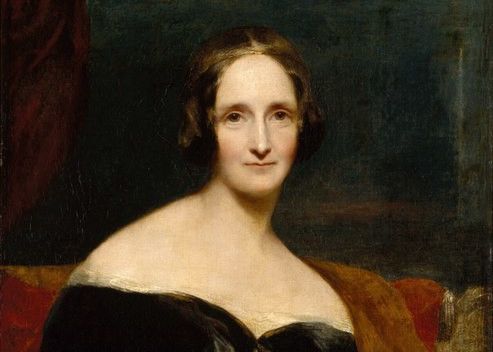 Question for Quote Investigator: English author Mary Shelley penned the famous science fiction novel “Frankenstein; or, The Modern Prometheus”. The overweening ambition of the main character, scientist Victor Frankenstein, caused him to create a monster. He learned bitterly that his passion for success and fame was destructive. Apparently, his dying words were a powerful injunction to avoid ambition. Would you please help me to find a citation?

Reply from Quote Investigator: Mary Shelley published “Frankenstein” in 1818. Victor Frankenstein’s final conversation occurs with Robert Walton, the captain of a ship which is on a dangerous journey toward the North Pole. Crewmembers of the ship discover an exhausted and gaunt Victor floating on a block of ice. After Victor partially recovers his health he proceeds to tell the captain his tragic saga. Below are Victor’s last words before expiring. This passage uses the British spelling: “tranquillity”. Boldface added to excerpts by QI:[1]1818, Frankenstein, Or, The Modern Prometheus by Mary Wollstonecraft Shelley, Volume 3 of 3, Chapter 7, Quote Page 177, Printed for Lackington, Hughes, Harding, Mavor, & Jones, London. (Google … Continue reading

“The forms of the beloved dead flit before me, and I hasten to their arms. Farewell, Walton! Seek happiness in tranquillity, and avoid ambition, even if it be only the apparently innocent one of distinguishing yourself in science and discoveries. Yet why do I say this? I have myself been blasted in these hopes, yet another may succeed.”

Oddly, Victor’s final two sentences seem to undercut the admonition to avoid ambition. Victor’s ambivalence reflects the complexity of his character. Mary Shelley did not wish to enforce a single meaning for her sophisticated fable. The framing tale of Captain Robert Walton’s perilous voyage illustrates a counterpoint to Victor’s story. Walton decides to halt his expedition. Thus, Walton selects safety over ambition.

If the Buddhists have it right, the world is completely destroyed 75,231 times per second, and each time completely restored. In all the worlds of Ben’s 36 years, there was nothing worth saving; he could die now, saying with the dying Frankenstein: “Farewell, Walton! Seek happiness in tranquillity and avoid ambition, even if it be only the apparently innocent one of distinguishing yourself in science and discoveries …”

Captain Walton consents to call off his expedition, though he cannot bear leaving his dreams for glory and discovery unsatisfied. Victor Frankenstein, however, will not give up his quest so easily. He tries to get out of bed but collapses, close to death. His dying words to Walton are: “Seek happiness in tranquillity and avoid ambition.”

A more recent version of this ancient story that fits our tech-obsessed moment is Frankenstein. Inebriated on his own brilliance, Dr. Frankenstein tries to defy the natural order and create life. In doing so, he makes something too hideous to contain, and that’s his doom. His last words in the novel are an instruction to “avoid ambition.”

In conclusion, Mary Shelley deserves credit for creating the character Victor Frankenstein in her novel “Frankenstein; or, The Modern Prometheus”. The quotation was spoken by Victor shortly before he died near the end of the book.

Image Notes: Public domain picture of a painting of Mary Wollstonecraft Shelley by Richard Rothwell circa 1840. Image has been resized and cropped.

(Great thanks to Scott Galloway who referred to this quotation in an article which led QI to formulate this question and perform this exploration.)