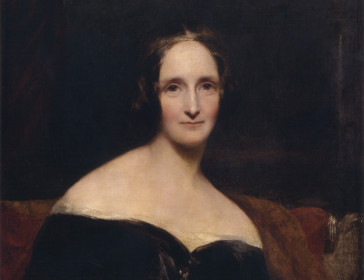 Dear Quote Investigator: Finding a goal or purpose to strive for in life is wonderfully helpful; uncertainty and anxiety are replaced by mental tranquility. Mary Wollstonecraft Shelley who authored the groundbreaking science fiction novel “Frankenstein; or, The Modern Prometheus” once made this point. Would you please help me to find citation?

Quote Investigator: Shelley’s “Frankenstein” begins with the text of a letter from the explorer Robert Walton to his sister. The fictional Walton is leading an expedition toward the North Pole while hoping to make a major discovery such as a navigable passage connecting the Atlantic Ocean to the Pacific. Boldface added to excerpts by QI:[1]1818, Frankenstein: Or, The Modern Prometheus by Mary Wollstonecraft Shelley, Volume 1 of 3, Letter 1, To: Mrs. Saville, England, Location: St. Petersburgh, Date: Dec. 11, 17–, Start Page 1, … Continue reading

These reflections have dispelled the agitation with which I began my letter, and I feel my heart glow with an enthusiasm which elevates me to heaven; for nothing contributes so much to tranquillize the mind as a steady purpose,—a point on which the soul may fix its intellectual eye. This expedition has been the favourite dream of my early years. I have read with ardour the accounts of the various voyages which have been made in the prospect of arriving at the North Pacific Ocean through the seas which surround the pole.

Walton’s crew discover a man on a sledge who is nearly dead. The man is nursed back to health, and Shelley switches the narration of the novel. The rescued man is the ill-fated scientist Victor Frankenstein, and he recounts the rest of the tale.

END_OF_DOCUMENT_TOKEN_TO_BE_REPLACED

Samuel Taylor Coleridge was asked, “Do you believe in ghosts?” “No, ma’am,” he replied, “I’ve seen too many.” Lucy Finn

Did Coleridge really make this remark?

Quote Investigator: Yes, there is good evidence that he did make a comment of this type. The context helps to explain what he was trying to communicate.

Coleridge died in 1834, and more than sixty years later in 1895 excerpts from his unpublished notebooks were printed in the work “Anima Poetae”. An entry dated May 12, 1805 discussed an extraordinary episode during which Coleridge saw an apparition. He had been engaged in a long conversation with a companion who said goodbye and retired. Coleridge began to doze for five minutes while sitting in a red armchair. He awoke suddenly and perceived that his companion who had left was somehow still present. He was startled but started to doze again. Awakening he saw the same spectral figure:[2]1895, Anima Poetae: From the Unpublished Note-Books of Samuel Taylor Coleridge, Edited by Ernest Hartley Coleridge, Entry Title: Illusion, Entry Date: May 12, 1805, Start Page 122, Quote Page 123, … Continue reading

The appearance was very nearly that of a person seen through thin smoke distinct indeed, but yet a sort of distinct shape and color, with a diminished sense of substantiality — like a face in a clear stream.

Coleridge’s skepticism about his own perceptions led him to record information about these mental excursions. Emphasis added to excerpts by QI:

Often and often I have had similar experiences, and, therefore, resolved to write down the particulars whenever any new instance should occur, as a weapon against superstition, and an explanation of ghosts — Banquo in “Macbeth” the very same thing. I once told a lady the reason why I did not believe in the existence of ghosts, etc., was that I had seen too many of them myself.

In the passage above Coleridge referred to Lord Banquo who was a character in Shakespeare’s play “Macbeth”; during the course of the drama Banquo was murdered by Lord Macbeth and reappeared as a ghost.