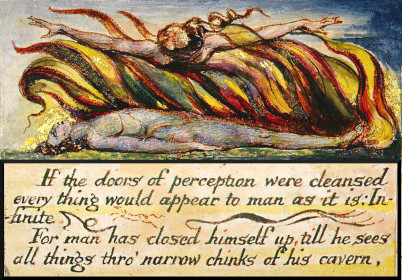 QI hypothesizes that this quotation was streamlined and then the words were reassigned to more prominent figures such as Jim Morrison, Aldous Huxley, and William Blake.

Here are selected citations in chronological order. Scanned images of William Blake’s artwork and poems are available online. The modified fragment from “The Marriage of Heaven and Hell” given in the image above is from the Houghton Library at Harvard University. The composition is dated 1790, and the print is dated circa 1818:[2]1790 (period of composition), The Marriage of Heaven and Hell, William Blake, printed circa 1818, (Houghton Library at Harvard University), copy G, object 13 (Bentley 14, Erdman 14, Keynes 14) … Continue reading

If the doors of perception were cleansed every thing would appear to man as it is, infinite.

For man has closed himself up, till he sees all things thro’ narrow chinks of his cavern.

In 1954 Aldous Huxley published “The Doors of Perception” and his work did contain comments about doors. But it did not contain a quotation matching the phrase under investigation. In the following sample excerpt Huxley credits H.G. Wells with a metaphorical use of the term doors:[3] 2009 reprint, The Doors of Perception and Heaven and Hell by Aldous Huxley, Page 62, HarperCollins, New York. (Google Books preview) link

Art and religion, carnivals and saturnalia, dancing and listening to oratory—all these have served, in H. G. Wells’s phrase, as Doors in the Wall. And for private, for everyday use there have always been chemical intoxicants.

In 1967 Newsweek published an article about the Doors titled “This Way to the Egress”. The magazine noted that the group’s first album had moved toward the top of the charts. Co-founder Ray Manzarek was quoted discussing the name of the band:[4] 1967 November 6, Newsweek, Music: This Way to the Egress, Page 101, Column 2, Newsweek, Inc. (Verified on microfilm)

“There are things you know about,” says 25-year-old Manzarek, whose specialty is playing the organ with one hand and the bass piano with the other, “and things you don’t, the known and the unknown, and in between are the doors–that’s us. We’re saying that you’re not only spirit, you’re also this very sensuous being. That’s not evil, that’s a really beautiful thing. Hell appears so much more fascinating and bizarre than heaven. You have to ‘break on through to the other side’ to become the whole being.”

Morrison suggested the group’s name from a William Blake quote that appeared on the flyleaf of Aldous Huxley’s Doors of Perception: “There are things that are known and things that are unknown; in between are the doors.”

QI has been unable to find the above quotation on the flyleaf of an edition of Huxley’s book. In addition, QI has found no evidence that William Blake made this remark.

In 1990 an advertisement for a movie about the well-known band titled simply “The Doors” displayed an instance of the saying attributed to Morrison:[6] 1990 June 29, Indiana Gazette, ((Advertisement for the movie “The Doors”), Quote Page 10, Column 4, Indiana, Pennsylvania. (Newspapers_com)

“There are things known and things unknown and in between are the doors.”

Jim Morrison quotes (American Poet and Singer. Member of the American band The Doors and one of rock music’s mythic figures. 1943-1971)

In conclusion, the saying under investigation was probably derived from the words of Ray Manzarek and not from those of Jim Morrison though it is possible that Morrison said something similar at a different time. It is also conceivable that the works of the prominent artists William Blake and/or Aldous Huxley influenced one or more band members, and hence influenced the name selection of the band. But QI believes that the quotation should be attributed to Ray Manzarek.

(Thanks to Fred R. Shapiro for inspiring this question, and thanks to Gregory McNamee for pointing to the Blake quote. Thanks also to twitter discussants in November 2020.)

Update History: On December 11, 2020 the format of the bibliographic notes was updated to numeric form. Also, the 1978 citation was added.

One thought on “There Are Things Known, and Things Unknown, and In Between Are the Doors”